‘Rebellion in the Heartland’ in Alexandria
Votes

‘Rebellion in the Heartland’ in Alexandria 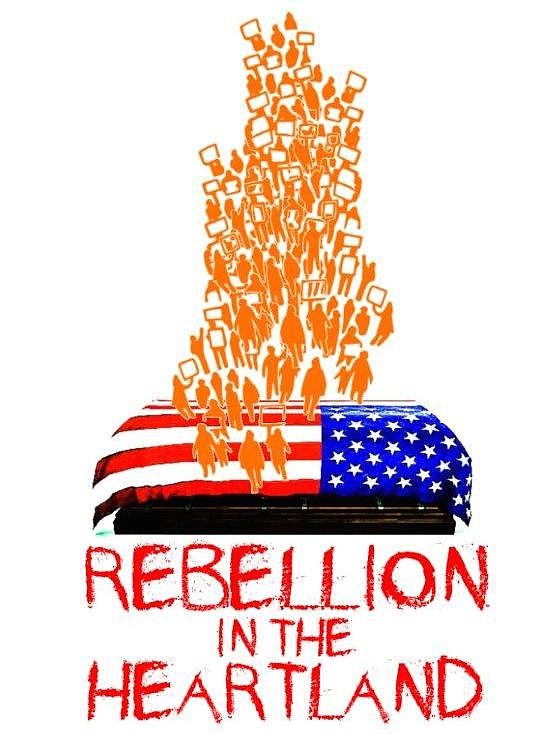 A reading of ”Rebellion in the Heartland” will be presented Monday, March 18, at 7:30 p.m. at MetroStage in Alexandria. Graphic by Crystal Adaway

Pipeline Playwrights will hold its next reading in its third reading series of world premieres: “Rebellion in the Heartland” by Patricia Connelly, on Monday, March 18, at 7:30 p.m. at MetroStage in Alexandria.

In this drama, directed by Catherine Tripp, a young lawyer is forced to question her beliefs and finds in the end she must decide whether to continue with what she knows will be the biggest case of her career or whether to walk away, turning her back on her clients, family and religion.

According to Connelly: “’Rebellion in the Heartland’ begins with a protest by a church group at a military funeral, led by one of its devoted members, Janet, who is also a lawyer for the church and daughter of one of its leaders. The church members believe that America is doomed for condoning gay rights, gay marriage, and transgender rights. The members also believe that America has replaced religion with patriotism and that Americans idolize the military, the flag and other patriotic symbols, rather than God. Their beliefs come from their own rigorous interpretation of the Bible.”

She continued: “After picketing at one military funeral with signs that say things like ‘God Hates Fags’ and ‘Thank God for Dead Soldiers,’ the mother of the dead soldier sues the church and its leader for intentional infliction of emotional distress. Janet is asked to represent her father and the church. The play focuses on Janet, an experienced and skilled trial lawyer, who begins to show cracks in her faith and questions the church’s extreme tactics after she comes face to face with the mother of the slain soldier.”

She said her main challenge was how to get beyond her own bias against a group that would picket and display hate-filled signs at military funerals and funerals of gay men and women. “The Southern Poverty Law Center in fact views the Westboro Church as a hate group. In order to write about people with similar beliefs, albeit fictional characters, I wanted to understand the individuals who participate in groups with such extreme views and understand what would motivate them to use the tactics they use so that I could find a way to create sympathetic complex human characters in these circumstances,” she said.

“In order for the play to work, Janet needs to be a fully realized person, strong in her beliefs at the outset, with her struggle fully developed. It’s been a challenge understanding various Biblical passages that extremist groups use to justify extreme actions and beliefs,” she said.

Connelly said she first was inspired to write the play when she heard an interview with one of the lawyers in the Supreme Court case of Snyder v. Phelps involving the Westboro Church of Kansas that pickets at military funerals. “I began to think about how attorneys are sometimes called upon to represent clients whose conduct and beliefs differ from their own, yet they still find a way to vigorously represent those clients,” she said.

She continued: “With the Westboro Church Supreme Court case, the lawyers were not only members of the church, but they were children of the founder. I wondered what would have happened if those lawyers had personal misgivings or doubts about their faith or their tactics and, if so, what they would have done and how their actions would affect their family relationships and relationships within the church community.”

She said she hopes the play causes people to consider the personal issues for Janet — both as a lawyer and family member of the founder of the church — and what she risks when she questions both family and religion. “I also hope audiences begin to understand how difficult it is to balance and protect First Amendment rights when espoused by extremist groups that choose to exercise them in a manner that most people find shocking,” she said.

Pipeline Playwrights is a group of women playwrights based in Northern Virginia, working together to support, present, and promote each other’s work with the goal of moving their play into the theater pipeline. Playwrights Jean Koppen, Ann Timmons, Crystal Adaway and Patricia Connelly each will be presenting a reading of a full-length play in the 2019 spring reading series at MetroStage in Alexandria. MetroStage is located at 1201 North Royal Street, Alexandria. For more information, visit www.thelmatheatre/PipelinePlaywrights.com.html.