Virginia General Assembly: Reporting on the Highs and the Lows in McLean
Votes

Virginia General Assembly: Reporting on the Highs and the Lows in McLean 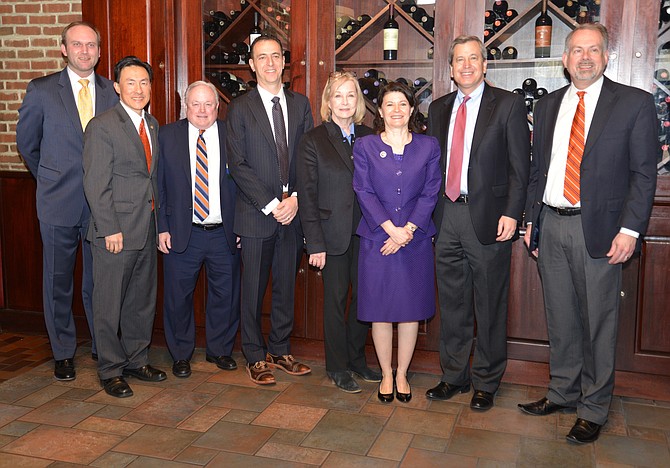 At the March monthly meeting of the Greater McLean Chamber of Commerce, local Virginia General Assembly representatives presented what they saw as the highlights, and lowlights, of the recently completed session.

“Passing a 5 percent pay raise for teachers was a real win,” said Favola, who also declared legislation that allows hiring of support personnel to address behavioral issues in schools and for training to spot and prevent human trafficking “critical to breaking the school-to-prison pipeline” and protecting our vulnerable youth.

THE SENATOR placed her bills to exempt contraceptives from insurance co-pays, support for solar power and stricter firearm safety measures in the loss column of the 2019 session.

Del. Simon, the House Parliamentarian, was pleased that Virginians would benefit from the State’s $1.2 billion windfall resulting from changes in the tax laws.

“All Virginians will see some money back,” said Simon, and after much work on the budget and measures to align the Commonwealth’s tax codes with those federal changes, standard deductions for Virginians have also been increased.

“We also had success on a bill to protect juvenile immigrants who have been abused, neglected or abandoned,” said Simon, although he noted the avoidable “back and forth” required to finally secure passage. “The word ‘immigrant’ was a real sticking-point … a sensitive topic, but we got it through.” Youth so effected can now seek special status while applying for asylum.

Although the ERA bill passed the Senate and related bills garnered 52 co-patrons in the House of Delegates, “they never even made it to the floor for a vote. They were killed in committee.”

Del. Murphy was equally disappointed over the failure of the ERA, as well as the lack of progress on “common-sense measures to address gun violence,” but applauds passage of a bill, despite significant push-back from opponents, that requires a mandatory jail sentence for those convicted of a second violent domestic abuse offense.

Murphy did have wins to report that directly affect her local constituents, including reform on stormwater management treatment in Great Falls, and provision for “residency stickers” that would allow exemptions for locals to pass through or enter areas that may be cut-off to through traffic as the result of transportation fixes under discussion in the area.

Del. Mark Keam categorized the session as one of the most productive in his 10 years as a member of the House, if for no other reason than the increase in Democratic delegates “helped protect us from some of the more conservative bills that were introduced.”

AMONG THE SUCCESSES Keam highlighted: work on the Budget, taxes, redistricting, the Amazon deal, the raising of the age from 18 to 21 for the purchase of tobacco products, and reversing the “default” position on Blue Laws in the Commonwealth. Instead of having to “opt-in” to allow the sale of alcohol, with the passage of HB 2634, counties would have to pass local legislation via referendum to prohibit the sale of alcoholic beverages.

Keam praised freshman delegate Chris Hurst, who introduced the bill, calling him “a rising star” of the Party. Hurst, formerly the anchor for Roanoke’s WDBJ, only entered politics in 2017, motivated to action by the on-air murder of his girlfriend, journalist Alison Parker in 2015.

Another success, noted Keam, was the loosening of restrictions on absentee voting rights to become effective for the 2020 elections.

Basically, the bill would remove restrictive “reasons for the need to vote absentee-in-person.”

“There’s still some work to do on what periods of time will be allowed for absentee voting, but this will really help get more voters’ voices heard.”

Keam was also the first to speak to the “elephants in the room,” referring to the scandals that have plagued Virginia’s Democratic Governor, Lieutenant Governor and Attorney General, starting in February.

“In some ways, those events helped us focus on getting the work done,” he said, but also acknowledged that the situation meant that the Governor was not available or able “to exert his influence and help us negotiate or push when things were close.”

Keam’s remarks were accompanied by head nods of agreement from his colleagues.

“It would be dishonest to say that the situation didn’t have a policy impact,” said Del. Simon.

Del. Rip Sullivan rounded off the legislative presentation, pleased that the General Assembly “did its part to secure the Amazon deal for the benefit of all Virginians.”

Sullivan described another addition to the win column.

“We’ve been watching tuition costs in Virginia rise, year after year. Those institutes of higher education continue to ask for our financial support.” The General Assembly was willing to comply with their requests – but only for schools that don’t raise tuition costs.

All said and done, the elected officials were generally pleased by the forward movement on many policies and initiatives this year, but agree that the Nov. 5 elections could accelerate progress if there is a better balance of power in the Legislature, perhaps encouraging more bipartisan efforts.