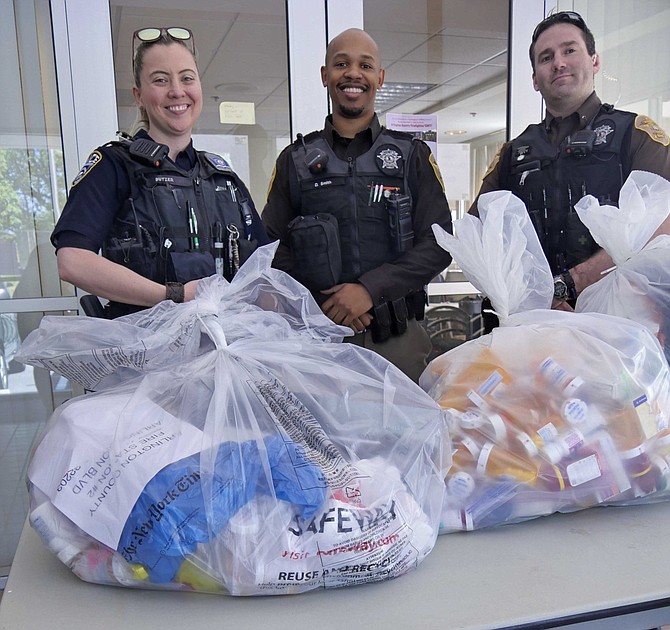 People were waiting early beside the "Don't be the Dealer" sign outside the door of Fire Station 2 on Wilson Boulevard at 9:15 a.m. April 27 to return unused or outdated prescription drugs.

Business was steady until about noon. Deputy Dominique Smith said, "A lot of people seemed to be participating in Prescription Drug Take Back Day for the first time because they didn't know much about it and had a lot of questions."

Corporal Sarah Butzer says the Arlington County Police Department, Arlington County Sheriff's Office and the Drug Enforcement Administration (DEA) partner twice a year in April and October to offer a free anonymous drug disposal service to the community. She says last April they collected about 700 pounds from several locations around the community. Later in 2018 ACPD installed the permanent take-back boxes at a number of locations around Arlington which can be used year round. They collected 1,746 pounds in the take back boxes.

Butzer noted the DEA can't accept needles, liquids or sharps. She said people seemed to be returning a lot of different kinds of pain pills.

Moira McQuillen pushed open the door to the fire house and removed several bottles from her purse. She said, "This is the first time I've participated in the drug take back. I'm returning my daughter's expired anti-malarial medication. She is in Uganda, and she needed a new prescription." McQuillen added, "I'm headed to the library now for a presentation on Medicare. I'm just so glad I live in Arlington where they offer all of these great services."

Butzer says Station 2 has been the busiest collection site, both last year and so far this year. By noon they had emptied the tall wooden collection boxes three times, bagged and twist sealed the prescription drug bags to protect the identities of those who returned them. At 2 p.m. when the drug collection closes, a member of the ACPD Vice and Narcotics section will pick up the bags and take them to the DEA who will weigh and then incinerate the drugs.

Smith says the police department participates in these community events "to dispel the bad stereotype of the police, and it shows we want to help out."