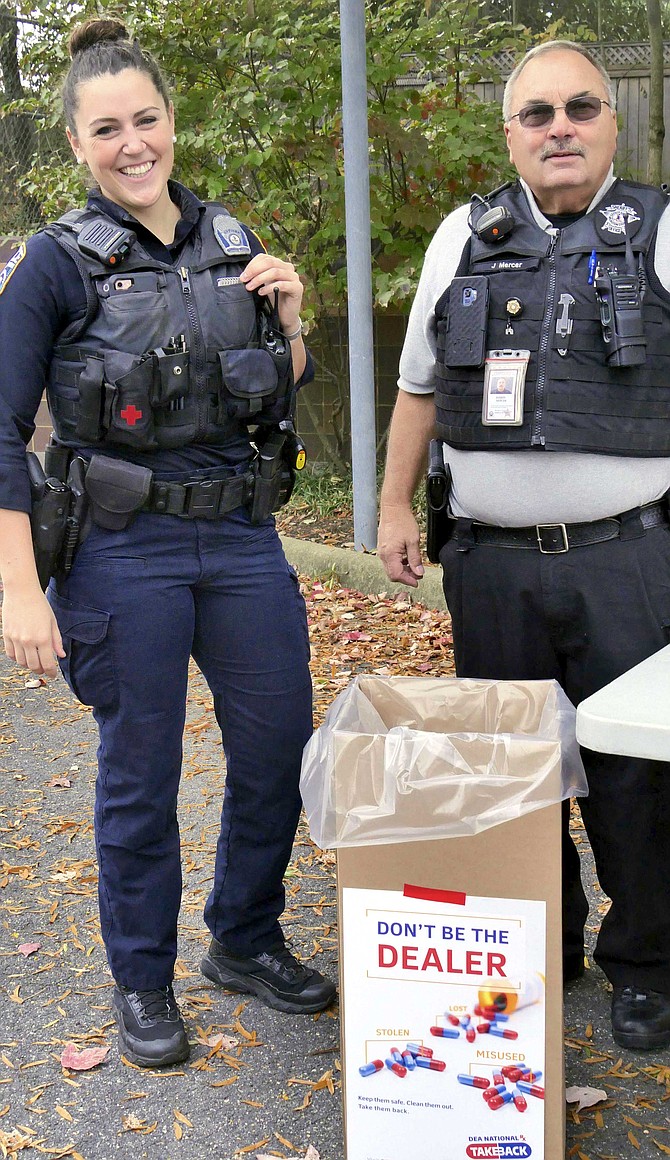 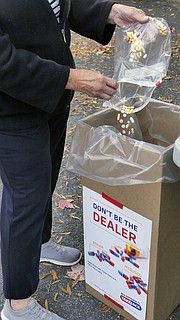 A woman pours pills into the tall cardboard prescription take back box labeled "Don't be the Dealer."

Two tall cardboard boxes warn "Don't be the Dealer" at the Fire Station #2 prescription drug take back site. Arlington County Police Department (ACPD) Community Outreach Officer Christin Oesterling and Sheriff's Department Reserve Deputy Officer Jeff Mercer are manning the take back station on South Glebe Road on October 26. "People were lined up this morning at 10 when we opened to dispose of their prescription drugs," Mercer said.

One woman has emptied her pills from her plastic pill bottles into a separate bag. "I didn't want something with my name on it. I also had my dog's prescription pills but didn't bring them with me."

Oesterling says, "We're not allowed to touch what you bring, so we don't know what's being disposed of in these large plastic bags. It's anonymous. I would dispose of my own drugs in these containers. We do accept pets' prescriptions as well."

She says at the end of the day, a deputy comes and collects the bags and takes them to the State Police, who weigh the bags and then deliver the contents to be burned.

Mercer says, "We're just getting started. As it gets closer to 2 p.m., everyone will suddenly come." He says sometimes retirement homes bring large bags of drugs from people who have died.

A woman comes up with a small plastic bag of pills.

"I'm coming here for the first time. I didn't know where to go. It used to be that pharmacies took back drugs, but a lot of them don't do it anymore."

Mercer tells her you can bring any medicines except sharps, liquids or needles that must be disposed of at specific locations around the county. "We even take vaping supplies now."

ACPD participates in the Drug Enforcement Administration (DEA) National Take Back efforts twice a year, in April and in October. DEA states, "Unused or expired prescription medications are a public safety issue. Unused drugs thrown in the trash can be retrieved and abused or illegally sold."

Oesterling says, "and you're not supposed to flush them down the toilet anymore. We just want a safe way to take care of these unused drugs."