School division weighs custodian retention and other budget adjustments ahead of June adoption. 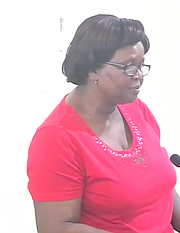 John Adams Elementary School custodian Jackie Howell testified at the May 9 School Board public hearing on the adjusted FY2020 budget.

The School Board began considering final adjustments to its annual budget last week, including adding funding to retain custodians and shifting textbooks to the capital budget, among other things.

With a final allocation from City Council and updated state funding figures from the General Assembly, the School Board must now finalize its budget, including closing an $808,000 gap.

Superintendent Dr. Gregory Hutching proposed adding $1.8 million to retain 20 full-time custodial positions, while outsourcing 10 others. Hutchings would offset the remaining gap by reducing the substitute teacher budget. He suggested that he and other central office staff with teaching licenses could augment the substitute pool by teaching a few times per year.

In his initial budget proposal, which the School Board adopted, Hutchings recommended terminating 30 custodians. The move would cut short a 2007 School Board decision to privatize custodial services division-wide through attrition (voluntary job changes and retirement). But custodians, organized under the Education Association of Alexandria (EAA), have been pushing back.

Dawn Lucas, EAA president and a special education teacher, said at a May 9 public hearing: “Our custodians … are part of the ACPS family. Family should not be treated like they have been treated, or like they don’t matter…. Our custodians deserve their jobs with ACPS. They deserve a true attrition plan.”

Jamar Hines, a 13-year custodian with two asthmatic sons, lamented “constantly thinking about what’s next.” He added: “My son came to me: ‘Dad, can we go on a summer trip? I know that you might not have a job, but I’m OK, we don’t have to do it.’ That’s unhealthy for a sixth grader to have to talk to his dad like that, and I have to sit there and explain it, when I was promised I could stay.”

Shaliyah, Sharena’s 24-year old daughter, said: “Without my mother’s insurance, I don’t know what kind of shape I would be in. … It scares me to think that I could lose it in the blink of an eye. I’m so thankful for my mom. She’s my motivation to keep fighting and never give up, no matter what. … So I ask that you don’t privatize my mom’s job and keep your promise. … A broken promise implies that you didn’t think before making it, or you just don’t care.”

Jackie Howell, a John Adams Elementary School custodian, recounted calling 911 and staying with an ill teacher until paramedics arrived. She recounted another occasion when she sat with a crying student while he waited for his parents to pick him up after school.

“Custodians do more than just keep buildings clean,” she said. “We help both staff and students in many valuable ways. The staff, students and parents trust us. We want to keep our jobs and our benefits. Some of us are one paycheck away from being homeless, so we need our jobs.”

Mirroring a city budget change, the Hutchings would also shift $708,000 from the one-year operating budget to the 10-year Capital Improvement Program. The move, cost-neutral this year, would reflect thinking of textbooks long-term as "educational infrastructure," said Mayor Justin Wilson.

While the schools have added textbook funding for all 10 years, the city hasn’t. Council would have to identify funding in future budget cycles, according to city spokesperson Craig Fifer.

The schools continue to balance their budgets each year by drawing down on fund balance. The draw-down this year weighs in at $5.7 million.

The schools’ next budget-related meeting will take place on May 23. The School Board will adopt its final budget June 6. For more, visit www.acps.k12.va.us/budget.