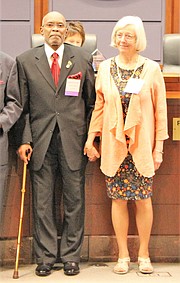 New Hope Housing Executive Director Pamela L. Michell was named Lady Fairfax by Fairfax County Board of Supervisors Chairman Sharon Bulova, in a ceremony at the Fairfax County Government Center on Tuesday, May 14. Lord Fairfax will be Randy Sayles, a retired Denver police officer who has volunteered in numerous roles for the Fairfax County Police Department.

The Lord and Lady Fairfax Awards Program was first instituted in 1984 and yearly honors two volunteer and civic leaders from each magisterial district and two at-large chosen by the chair. The honorees are selected for outstanding service to their home districts or to Fairfax County.

“I’m thankful to Sharon Bulova for selecting me and for recognizing the important work of New Hope Housing, our staff, and our volunteers,” said Michell. “I’m humbled to be in a group that has included so many community heroes and kind souls like Barney Barnwell and our founder, Eleanor Kennedy.”

Michell joined New Hope Housing as executive director in November 1990 after answering an ad in The Washington Post. In this position she is responsible for the operation of an $8,000,000 non-profit, community-based agency that provides homeless families and individuals shelter, housing, and tools to build a better life. She has led New Hope Housing with a philosophy of dignity and respect for every person and a place that welcomes all.

Under her leadership, New Hope Housing has grown from a program of three shelters in southeastern Fairfax County serving approximately 100 people a day, to a continuum of services that includes six shelters, nine permanent supportive housing programs, rapid rehousing services, and a number of support services providing hope and hospitality to as many as 450 people a day in Fairfax County, Falls Church, Alexandria, and Arlington County. New Hope Housing has received many awards including Best Housing Organization 2004 at the Virginia Governor’s Housing Conference, was selected as one of five finalist organizations in The Washington Post 2009 Excellence in Nonprofit Management Award program, and the Virginia Coalition to End Homelessness Housing First Award in 2015.

Michell was named a 2005 Washingtonian of the Year, received the Center for Nonprofit Advancement’s 2009 Gelman Rosenberg Freedman EXCEL Award for excellence in nonprofit leadership, and was named the Leadership Fairfax Nonprofit Leader of the Year in 2013.

Michell is an advocate on behalf of homeless adults and families in the community, serving on the boards of a variety of grassroots advocacy organizations and on a variety of work groups and task forces dealing with homelessness, housing, other human services, and equity issues.

Randy Sayles is a retired Denver uniform police officer, detective and federal agent, deputy assistant administrator, U.S. Drug Enforcement Administration, with over 35 years of experience in use-of-force incidents. His firsthand experience has been valuable in his service to Fairfax County, including as a member of the Ad Hoc Police Practices Review Commission, serving on the Use of Force Subcommittee, the informal implementation group, the internal use-of-force committee at the Police Department and as an original member of the Civilian Review Panel.

New Hope Housing is a nonprofit agency providing shelter, transitional and permanent supportive housing, outreach and support services for homeless families and single adults in Fairfax County, City of Alexandria, Arlington County, and City of Falls Church. New Hope Housing is committed to finding creative and lasting solutions to end the cycle of homelessness by offering homeless men, women and children the services they need to change their lives and succeed. For more information, visit www.newhopehousing.org.