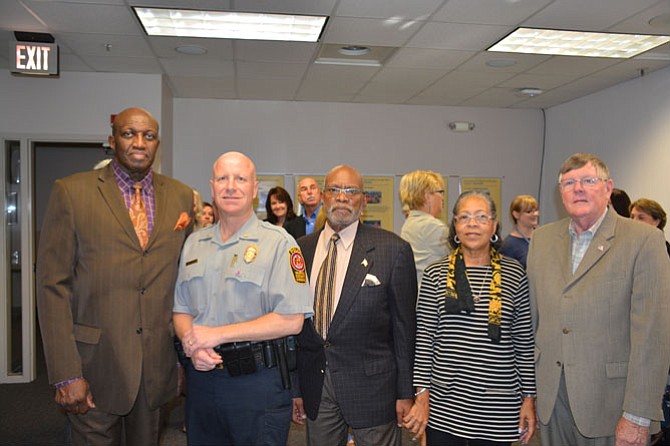 “Wherever I worked, if I saw injustice, I would speak up for what I thought was right.” - Randy Sayles

After serving his country as a U.S. Marine from 1967 to 1968, Randy Sayles of Oak Hill served as a patrol officer with the Denver Police Department for five and a half years.

A 12-year-old African American boy watched as a city of Denver patrol car with two white police officers drove slowly by his house, where he reported people attempting to break in.

The boy became enraged, and obsessed, with the goal that one day he would become a police officer, and be a good one.

Randy Sayles of Oak Hill, now 68, grew up in predominantly white Denver, Colo. He was the only child of single mother Delores Sayles. She was a domestic worker who didn’t have a lot of education, he said.

To protect her son from drugs and lawlessness, Sayles’ mother wouldn’t allow him outside much, where he could play with other children.

He also remembers from an early age she instilled in him that having a “moral respect for other people is the most important thing you can contribute to society.”

THOSE WORDS would guide Sayles’ personal and professional actions for decades to come.

Sayles retired in 2003 after more than 35 years in law enforcement. But he’s continued following what he believes is his civic duty to get involved when he sees an injustice.

Since 2002, Sayles has been collecting trash along a stretch of Centreville Road, documenting everything as he goes. In 2013, he signed on to do the work officially as part of the county’s Clean Streets program.

Sayles was honored for his efforts at the Oct. 18 Fairfax County Board of Supervisors meeting as one of two individuals to win an Environmental Excellence Award.

Sayles’ nomination for the award read: “There are many residents of Fairfax County who are passionate about keeping the county clean, green and sustainable, but few follow through with Herculean efforts like Mr. Sayles.”

It took as much effort if not more for Sayles to overcome what he said was a pattern of harassment from some Fairfax County police officers while volunteering.

His objection to being treated disrespectfully by some officers as he cleaned up the trash along the roads in Chantilly also led him lend the benefit of his years of experience in law enforcement to another area of service to Fairfax County. Sayles contributed hundreds of hours over the past 20 months to the efforts of the Ad Hoc Police Practices Review Commission.

AFTER SERVING HIS COUNTRY as a U.S. Marine from 1967 to 1968 (he was honorably discharged from a Vietnam assignment to care for his sick mother) Sayles served as a patrol officer and detective with the Denver Police Department for five-and-a-half years.

“He did his job without fear or favor,” said Jerry Kennedy, retired division chief of the Denver Police Department. “He got along well with his peers, was willing and proactive. That's what I liked in a policeman.”

Sayles learned to negotiate the brotherhood of police culture as well as his place in it as an African American.

“You have to look out for one another,” he said. If someone is wrong, makes a mistake, you had to protect those you relied on, “even if you don’t agree at the time.”

He remembers seeing officers in Denver who wouldn’t stand up to stop things they knew were wrong. But that was contrary to how he wanted to carry himself, how he’d been raised.

“Wherever I worked,” Sayles said, “if I saw injustice, I would speak up for what I thought was right.”

He was recruited in 1974 as the first African American Special Agent at the Denver regional office for the Drug Enforcement Administration, and learned four languages, including Turkish and conversational Urdu.

"There are many residents of Fairfax County who are passionate about keeping the county clean, green and sustainable, but few follow through with Herculean efforts like Mr. Sayles." -Nomination for Environmental Excellence Award

JOHN “JACK” LAWN, retired DEA administrator, met Sayles in the mid-1980s in New Orleans, where Sayles was supervising a group of young agents.

Lawn was already impressed with Sayles’ background, which included Sayles’ lifesaving role in a 1979 crisis where the U.S. embassy in Islamabad was attacked and set on fire. Sayles received the U.S. Attorney General’s highest award for heroism and valor for assisting U.S. Marines inside the embassy to save the lives of 90 individuals who were trapped there.

“His background as a law enforcement officer, a younger Marine, left him with a unique experience on how to deal with crisis situations,” Lawn said.

He was also impressed with Sayles’ sincerity: “His interest [was] in seeing the right thing was done on every occasion, making difficult decisions.”

Sayles was tapped to be a member of a federal monitoring committee for the DEA, to make sure promotions, assignments and other areas of employment were being distributed fairly.

As a junior agent, Sayles said he had seen discrimination in being passed over for promotions. His job on the committee was to ensure compliance.

“He didn’t over-try,” said Bob Bryden, retired DEA chief of operations. “He let the facts show up. He never let his position in the African American community affect a decision. I’ve known few people through the years with the true depth of integrity that he has. He knows the difference between popular and right.”

SAYLES TYPICALLY goes out between the hours of 1:30 a.m. and 5 a.m. to clean up the trash along the roadway near his home. “At those hours the only people are police and me,” he said.

On several occasions, Sayles said, he was approached by law enforcement officers — Fairfax County Police, state and federal protective police — while volunteering. He would be asked repeatedly by FCPD officers what he was doing, despite giving the same answer over and over again. Some officers said he was creating a hazard for traffic, despite the lack of traffic at that hour, he said. Others said it was their job to remove the illegal signs, not his.

Sayles said officers treated him with notable lack of respect. “Like they don’t believe in being respectful and professional. It gets me mad. ... I’m just a citizen, trying to do civic duty, and won’t let them continue to disrespect me.” His dismay at officers who would treat people with such disrespect and dismay is palpable when Sayles talks about it.

These interactions came on top of a number of situations where he said he was harassed by Fairfax County Police officers after being pulled over at various times driving.

One morning, when Sayles was stopped on the side of the road looking for his Fairfax County RECenter card, he said a cruiser stopped in the through lane next to him, lights flashing. The officer asked for his license and registration then walked away. Sayles didn’t want to identify himself as former law enforcement as he didn’t think it was relevant.

Some time later, a second, female officer came to Sayles’ window. He said she screamed at him: “Do you have a weapon?” Sayles remembers the saliva coming out of her mouth as she continued to yell, “Don’t you know the first thing you should’ve told us is if you had a weapon?”

At that point, Sayles said he didn’t say anything, rolled up his window, and sat looking straight forward while the officer continued to scream.

“Her tone, her demeanor, pissed me off,” he said.

“You of all people should’ve been able to answer better,” the officer responded, according to Sayles.

After the incidents when he was picking up trash, Sayles requested to report a complaint with police staff of FCPD Chief Edwin Roessler, but was refused.

But later at the Fairfax County Government Center, Sayles said he encountered Roessler himself and asked him about making an appointment. The chief suggested they look for an empty room and meet right away. Roessler sat with Sayles for 45 minutes.

“He listened without interrupting,” Sayles said, “let me tell my side.”

Roessler gave Sayles a few recommendations for his volunteer work, including putting a flashing yellow light on his van.

Within 24 hours, Sayles was back out on the road, police saw him, and kept driving.

Roessler attributed the repeated stops while Sayles was on Centreville Road to a lack of communication among overlapping jurisdictions that border the area: the Sully, Fair Oaks and Reston District stations.

To bridge the gaps, Roessler connected the stations and introduced Sayles face-to-face.

These experiences with law enforcement in Fairfax County, as well as his time in the field motivated him to serve on the Use of Force subcommittee for the Ad Hoc Police Practices Review Commission.

As a U.S. Marine, police officer, DEA special agent and supervisor, he had been personally involved in most of the types of scenarios — shooting at suspects, being shot at, using force, working undercover — that were being discussed for changing policies.

Sayles said understood from his time in Denver the need both to cover a fellow officer in the moment, but if they truly screwed something up, to be transparent about that with his supervisor.

“To me, that’s very important; it’s at the heart of the argument we make for the reform for the FCPD,” Sayles said. “There’s a culture there that they cover each other when they know they’re wrong. That has to be broken before we can truly have reform in the PD.”

Following the police commission recommendations, the Board of Supervisors has already voted to create an independent police auditor to review use of force incidents and complaints in particular. Next month the Board is scheduled to vote on establishing an independent civilian review panel that would look at other types of citizen complaints against officers for misconduct.

“Now it’s making it where if someone is harassed, they have another mechanism,” Sayles said. “You can feel you’re getting fair treatment with a police complaint, without going to court.”

The potential review panel, Sayles said, could be huge for community perception of law enforcement, particularly in low income communities.

ROESSLER SAID Sayles has been involved in a core group from the Ad Hoc Commission that’s continuing to meet with him and assist in implementing recommendations.

“He has decades of experience,” Roessler said. Having him, he added, “has been a blessing, makes us think.”

Roessler said he’s impressed how Sayles speaks directly, as well as his passion and his ethics.

The fact that projects like those from the Ad Hoc Commission are being delivered to meet the needs of the community “are because of people like Randy,” Roessler said.

Sayles said the environmental award was some vindication for the “trying times” he’s had with Fairfax County law enforcement.

But he also said he wanted to recognize the hundreds of volunteers who go out and do civic work, volunteer that people don’t know. “So many are equally qualified,” Sayles said, “they don’t ask for recognition.”