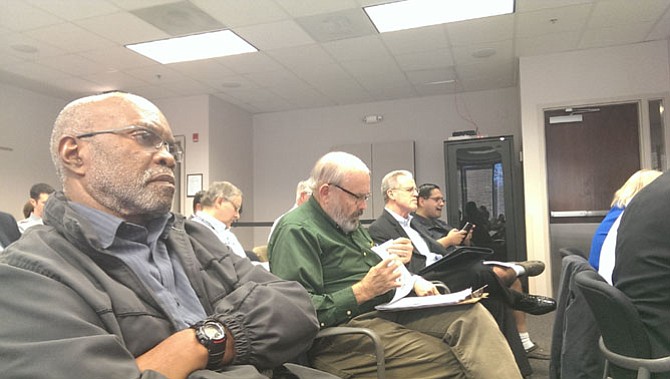 Randy Sayles (left) with Ad Hoc Police Practices Review Commission and subcommittee members John Lovaas, Phil Niedzielski-Eichner and George Becerra said he is very optimistic both the auditor’s office and civilian review panel will be beneficial to the supervisors, police and citizens. Photo by Tim Peterson.

Fairfax County — This year will see two historic firsts for Fairfax County, its police department and citizens: the beginning work of an Office of Police Auditor and Civilian Review Panel. The auditor will review police use of force cases and internal investigations of those incidents, while the panel will review other citizen complaints of police misconduct and abuse of power.

Both bodies were recommendations from the Ad Hoc Police Practices Review Commission, a panel created by Board of Supervisors chairman Sharon Bulova largely in response to public frustration and anger over the lack of transparency and accountability after the 2013 shooting of unarmed Springfield man John Geer in the doorway of his home by then-Fairfax County Police officer Adam Torres.

A committee appointed by Bulova is reviewing six candidates who topped the applicants list.

For the civilian review panel, invitations to nominate members have been sent to dozens of community groups, including minority organizations, disability services, interfaith groups and others that were part of the Election Process Improvement Commission. Each supervisor may also make nominations. Public Safety Committee chair supervisor John Cook (R-Braddock) said the full board will review all the nominations in closed session Feb. 14.

Supervisor Pat Herrity (R-Springfield) fully supported the auditor position but has been critical of the need for a civilian review panel -- he was the only supervisor to vote against its creation.

Looking ahead at 2017 though, Herrity said “my expectation and hope for both is they’re going to confirm our police department is doing a very good job.”

Randy Sayles of Oak Hill was a member of the Use of Force subcommittee of the Ad Hoc Commission. Sayles spent more than 35 years in law enforcement with the Denver Police Department and Drug Enforcement Administration. He said he is very optimistic both the auditor’s office and civilian review panel will be beneficial to the supervisors, police and citizens.

Sayles said from what he’s seen, “There’s a sense there can be be real improvement and transparency, not just lip service.”

In choosing the members of the panel, Sayles said it’s crucial the supervisors go with people who won’t allow bias to corrupt the review process.

“It’s very important people picked deal with facts, demand facts and make decisions based on facts,” Sayles said, “and communicate those in a way that’s not divisive.

“Try to get a diversity of people,” Sayles said. “But ultimately, pick people who are willing to be fair, no matter what. It can be a difficult thing to do.”

ANOTHER SIGNIFICANT AND CONTENTIOUS RECOMMENDATION from the Ad Hoc commission is the implementation of police officer-worn body cameras. Herrity said the supervisors are set to approve a new pilot program this month.

“They are absolutely important,” Herrity said. “This is something our police department supports, our citizens support. We should go ahead and get it done now.”

Herrity said the estimated cost for getting body cameras up and running on police in Fairfax County is $30 million. The pilot, he said, will last for several months. He’s asked that it include two different vendors and be done at stations in two magisterial districts.

SUPERVISOR COOK said another public safety priority is taking next steps with the Diversion First program, which is set up to prevent people with mental illness or developmental disabilities from going to jail for nonviolent offenses.

Coordinating more with the court system is an important issue, Cook said.

“We really need a sea change in how we think about mental illness,” said Cook, “to recognize it serves a public safety purpose as well to get people treatment. If you just throw them in jail, 80 percent of the time, something else happens, they’re going back in.”