The Fairfax County Commonwealth’s Attorney Candidate Forum will be Monday, June 3, 7 p.m. at the First Baptist Church of Vienna, 450 Orchard St., NW, Vienna. Meet the Fairfax County Democratic candidates for Commonwealth’s Attorney and find out where they stand on key criminal justice issues. This is an opportunity to ask the candidates what they will do to reduce mass incarceration, reduce racial disparities, and de-criminalize poverty. The event is co-sponsored by the Virginia Interfaith Center for Public Policy, the League of Women Voters of the Fairfax Area, the ACLU of Virginia, and the Fairfax County NAACP. Free and open to the public. RSVP at tinyurl.com/fairfaxcandidates.

Commonwealth’s Attorney Raymond (Ray) F. Morrogh is the chief law enforcement officer for Fairfax County, serving a population of more than a million residents in the county, the City of Fairfax, and the Towns of Herndon and Vienna. He left private practice in 1983 to join the Fairfax County criminal justice system as a prosecutor, then became an assistant commonwealth’s attorney, then chief deputy before being elected to the top slot in 2007. He was re-elected to another four-year term in 2011, and again in 2015, when he ran unopposed.

This year, Morrogh is facing a challenger in Steve Descano — one who is determined to unseat him and vocal in his criticism of an incumbent and an office that he says “lacks transparency and accountability” and that has become distanced from the people that they serve.

The two men have squared off on several occasions to make their cases before the “jury” of Fairfax County voters.

Both were invited to respond to an identical questionnaire from this newspaper. Note: Morrogh’s campaign did not respond despite repeated requests, so information has been summarized from his campaign’s website. 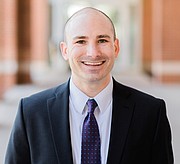 Prior and current professional, political and civic experiences, community involvement:

“I am running for Commonwealth’s Attorney to create a modern criminal justice system so that no one, no matter how powerful, is above the law. I’ll work to ensure that systemic discrimination based on race, wealth, status, and zip code is in the past. I’ll take a holistic approach to justice that builds up our communities. Reforming our system means that we will break the cycle of decreased opportunity, increased poverty, and increased crime that is the story of far too many of our neighbors.”

What do you see as the top 3 issues in your district and what solutions do you propose?

“Transparency and accountability – Currently there is no publicly available data or measures for holding the elected Commonwealth’s Attorney accountable during times of crisis. I will invite one of a number of outside organizations that will, for no cost to the taxpayer, generate demographic, socioeconomic and geographic data to compare outcomes of cases. This will help identify sources of systemic discrimination. To improve accountability, I will hold regular in-person and electronic town halls … to inform constituents about the state of policies and progress towards goals set by the data collected.

Cash Bail – Currently in Fairfax County, 45.9 percent who are eligible for pretrial release have cash bail as a stipulation. These are people deemed not dangerous to themselves or others, but must sit in jail because they cannot pay … a system that unfairly penalizes poor people simply for being poor and increases recidivism, even years down the line.

Treatment, not incarceration – People who are addicted to drugs are ill and need our help … we need to help them overcome their addition and come out the other side without the type of criminal record that limits their opportunities in the future. To do this, I will overhaul our diversion programs which currently only address the first part of the equation.

I have written a 20-page plan for reform called “Progressive Justice” that goes further into depth about specific policies and procedures I will implement while in office. (The Plan is available on the candidate’s website at www.stevedescano.com)”

Key ways you differ from your opponent?

“There are many differences, but I will offer two here.

First, I am committed to ending a two-tiered system of justice that disproportionately affects people based on race, wealth, and zip code. My opponent signed on in 2016 to the Republican lawsuit to stop then-Governor Terry McAuliffe from restoring voting rights of nearly 200,000 people who had finished their sentences. He has since altered his rationale, but at the time he noted that he did not want ‘those people’ on his juries.

Second, I have been a leader on criminal justice system reform as a member of the Fairfax County NAACP’s Criminal Justice and Legal Redress Committees, and as a member of the county Police Civilian Review Panel. On the other hand, my opponent, in 2014, as the Executive Director of the conservative National District Attorneys Association testified against the Obama Administration’s plan to reduce mandatory minimum sentences and curtail the War on Drugs.”

Moved to the District: Resident of Fairfax County since 1974

Prior and current professional, political and civic experiences, community involvement:

According to his campaign website, Morrogh lists continuing improvement to diversion programs for drug offense individuals, Veterans Treatment in the Fairfax County court system to help veterans get treatment for substance abuse or mental illness rather than be incarcerated, continuing support for the Diversion First Program, support of Supervised Release Programs for pre-trial defendants who are not deemed dangerous, protection of seniors from abuse and crime, and continuation of SafeSpot Children’s Advocacy Center of Fairfax County that provides a safe community for child victims of sexual and physical abuse.