Commonwealth’s Attorney says 84 additional positions are needed; 137 if the office is to prosecute traffic cases too. 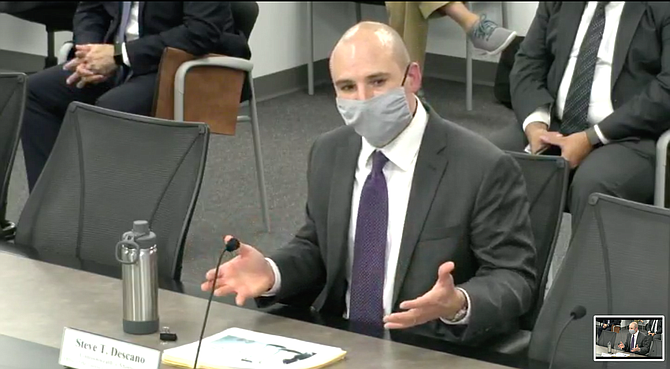 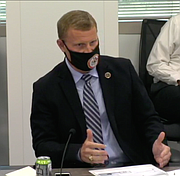 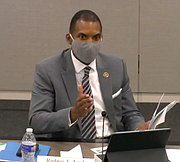 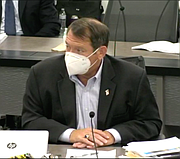 At a Public Safety Committee meeting Tuesday, Sept. 22, 2020, Descano asked the Board of Supervisors for the addition of 137 positions.

“We don’t have the time to do our jobs properly,” he said. “Without time, bad things happen.”

Because of the pandemic, there have been no felony trials since March. Felony trials are expected to resume on Nov. 1, 2020.

What’s more, the office could not at this level cover the planned rollout of police body worn cameras, a key element of the county’s police reform measures. Descano predicts 89,000 hours of body camera footage a year will need to be reviewed.

“Historically, Fairfax County’s CWA Office has been involved with all types of cases. However, now we know they were not able to do so properly, thoroughly, or ethically,” according to Descano’s presentation.

“IT’S DISTRESSING to be in the position where we are now,” said Descano.

He is asking for 87 attorneys; the rest would be support staff.

The total cost would be $19.1 million, which covers salary and benefits.

“And you have to find someplace to put them,” said Mason Supervisor Penny Gross (Mason).

“We’re all in a little bit of a state of shock right now,” said Board of Supervisors Chairman Jeff McKay.

“We need to be having a team of some of the stakeholders in this room working on this, and come back to us on a coordinated plan. Because what is clear is no matter what we do here, we’re going to affect another agency. We need to understand what exactly we are getting for our investment.”

“I think our Chairman got it right,” said Dranesville Supervisor John Foust. “We should all come together, no surprises.”

“We do need a plan, this is impacting a bunch of people,” he said.

“TO FIX A BROKEN SYSTEM,” Descano said five additional prosecutors on top of 15 positions he recommends to be covered by carry-over funding, would allow the office to cover all violent crimes, sex crimes, and related offenses.

He requested 22 more positions by July 1, 2021 to maintain coverage as the COVID-19 backlog comes to an end.

And 19 additional positions are needed to handle thefts and property crimes.

Expanding police body cameras to the rest of the county after a pilot program is a key piece of police reform in Fairfax County. Descano said his office would need 23 additional people to handle the body-camera footage.

And 53 more people, “whenever possible” to allow the office to cover all traffic misdemeanors.

“The numbers we’re dealing with here are unprecedented,” McKay said. “We don’t typically do that during carryover — encumber ourselves with recurring costs.”

The Fairfax County Office of the Commonwealth’s attorney has far less funding than that of other jurisdictions in Virginia. Per Capita spending on the office of the Commonwealth’s Attorney in Fairfax County, $4.31, is dwarfed by other jurisdictions: Arlington County’s per capita spending is $18.53; Alexandria ($20.72); Loudoun County ($11.37) and the City of Richmond ($28.33), for example.

”We’re all in a little bit of a state of shock right now.”

“It’s frustrating for officers to have great case work, come to the courtroom, and no longer be able to depend on a prosecutor being in court,” said Fairfax Chief of Police Col. Edwin C. Roessler Jr.

DESCANO is in his first year as Commonwealth’s Attorney after winning the first contested race for that office in more than 50 years, defeating Ray Morrogh in the Democratic primary. Descano was one of several new prosecutors elected last year on a platform of criminal justice reform, including Parisa Dehghani-Tafti in Arlington and Buta Biberaj in Loudoun.

Descano placed some of the blame for the understaffing of his office on his predecessors.

“For too long, we've been misled by prior leadership of the Commonwealth's Attorney's office that this organization was well-equipped, well-managed, and doing its job,” said Descano’s presentation. “To be clear: this office does not currently have the fundamental resources necessary to perform the services our community expects, and that we are ethically obligated to provide.”