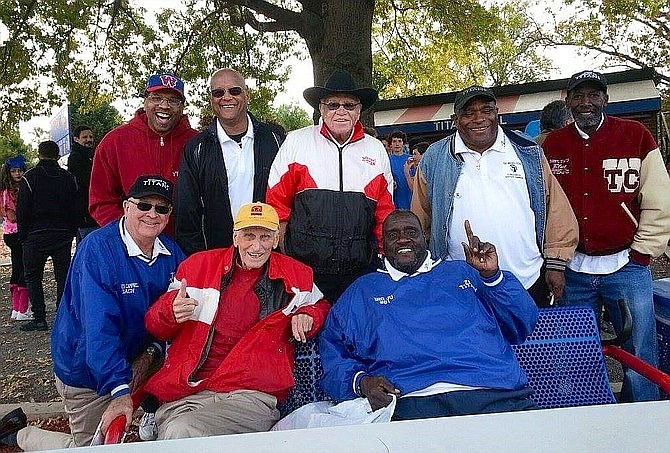 Coach Bill Yoast, seated at left, is shown with Coach Herman Boone, center back, and players from the 1971 TC Titans football team at the 50th anniversary of T.C. Williams High School in 2015. Photo contributed 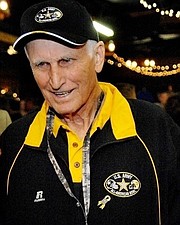 Bill Yoast, a longtime Alexandria teacher and one of the legendary high school football coaches who inspired the Disney film “Remember the Titans,” died May 23 at an assisted living facility in Springfield. He was 94 years old.

“Coach Bill Yoast was one of the most influential men in my life,” said Bob Stumpf, a 1970 graduate of Hammond High School. “I had the privilege to play on his varsity football team for two years including our Northern Virginia championship season of 1969. With the exception of our all-state quarterback, John O’Connor, we were a rather small team without much talent. Yet Coach Yoast had us performing at a level we never dreamed capable of.”

William Yoast was born Nov. 16, 1924, and raised in Florence, Ala. After attending Coffee High School, he spent three years in the Air Force and went on to attend Georgia Military College and then graduated from Mercer University with a Bachelor of Arts degree in physical education. He received his masters and EDS degrees from Peabody College in Tennessee.

Yoast excelled in sports and followed his love for athletics into teaching school and coaching football, basketball, baseball and track. Many of his teams had championship seasons with Yoast being named Coach of the Year in both Georgia and Virginia.

Unlike the more verbose character played by actor Will Patton on the big screen, Yoast was a quiet man with a humble demeanor.

“I never heard my father raise his voice,” said Yoast’s daughter Dee Dee Fox. “That was some accomplishment considering all the hours he spent teaching us all how to drive.”

Yoast moved his family to Springfield in 1960 from Roswell, Ga., where he taught and coached at Roswell High School. He was a teacher and coach at Hammond High School from 1960-1970, winning the Virginia AAA Regional Championship with his 1969 Hammond Admirals. He then moved to T.C. Williams to serve as Defensive Coordinator/Assistant Coach to Herman Boone. Yoast also coached track and field, taught P.E. and Driver's Education at T.C. Williams until he retired from teaching in 1990. He continued coaching football until 1996 when his daughter, Sheryl Yoast Matthews, died.

“A father should not have to bury his daughter,” Fox said. “Sheryl’s death slowed him down quite a bit.”

Yoast retired to Bethany Beach, Del., where he spent much of his time pond fishing. He continued to stay active and lift weights well into his 80s.

“Dad loved to fish and taught all of his grandchildren the art of patience and being still through fishing on the pond,” Fox said.

With the 2000 release of "Remember the Titans,” the story of the relationship between Yoast and Boone as they coached the 1971 T.C. football team to the Virginia State Championship, Yoast rode the wave.

“The release of the movie gave Dad a new lease on life,” Fox said. “Suddenly a man who never traveled was traveling and speaking throughout the country, co-authoring a book, doing community service events and hopefully inspiring future generations.”

Circuit Court Judge James Clark never played for Yoast but formed a friendship with him that lasted more than 50 years.

“Coach Yoast was one of those rare human beings who truly cared more about others than he cared about himself,” Clark said. “Although he was a great coach, and before that a great athlete, he maintained a genuine humility and was comfortable enough with himself that he could take great pleasure in the accomplishments of others.”

In 2014, Yoast returned to Northern Virginia to live with his daughter, Angie Yoast Garrison, and his son-in-law, Rick Garrison. In the fall of 2018, Yoast moved into Aarondale Assisted Living in Springfield. While there, he was visited often by former players, coaches and family.

“One memory I will never forget is being at the beach with my family shortly after ‘Remember the Titans’ came out,” Clark added. “By utter coincidence we ran into him and he agreed to have lunch with my kids, who loved the movie. One of them asked if the team really ran to the Gettysburg battlefield and if coach Boone really gave the inspirational speech that was in the movie. Coach just smiled and said ‘Well we actually took a bus to the battlefield and the bus driver gave that speech over a loudspeaker in the bus.’ Coach never liked anyone taking too much credit — especially for something that didn’t exactly happen.”

Yoast was the father of five girls, a grandfather and great-grandfather. He is survived by Betty Yoast, mother of three of his five daughters; daughters Susan Gail Greeson, Angie Yoast Garrison and Dee Dee Yoast Fox. He was preceded in death by daughters Sheryl Yoast Matthews and Bonnie Yoast Jeffries.

The family will receive friends on Friday, May 31, from 5-8 p.m. at the Demaine Funeral Home, 5308 Backlick Road, in Springfield. A memorial service will be held on Saturday, June 1, at 2 pm at St. John’s United Methodist Church, 5312 Backlick Road, also in Springfield. In lieu of flowers, donations may be made to the Gerry Bertier Foundation or the 71 Titans Foundation, http://71originaltitans.com.

“Such sad news,” said Don Simpson Jr. “It was such a privilege to play for him at Hammond and TC.”

Stumpf summed up what many of Yoast’s players felt: “Coach Yoast had us convinced that we could actually win. He gave us the tools to make it happen and in the end we were victorious. Playing for him was an experience that has never left me after all these years. I am eternally grateful to him.”