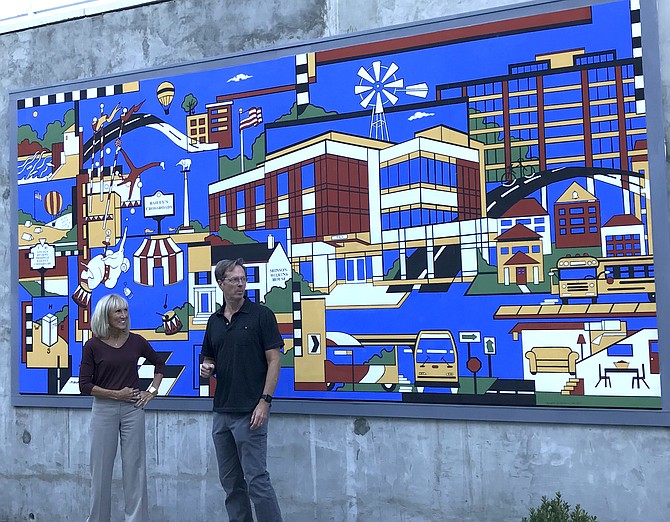 Reston artist Dana Scheurer is known for her many commissions and installations, among them "The Midtown Community Mural" on New Dominion Parkway in Reston Town Center, Public Art Installation — Bicycle Racks at Walker Nature Center, and Lobby Installations — The Jordan in Arlington, AHC Inc. Baltimore office, The Serrano, Jackson's Crossing and The Woodbury Apartments, according to the artist’s website.

After the Oct. 24 ribbon-cutting for the new Bailey's Shelter and Supportive Housing, located at 5914 Seminary Road in Falls Church, the public had its first opportunity to view Scheurer's latest and perhaps her most compelling work, "Bailey's Crossroads Community Mural," designed for Bailey's Shelter and Supportive Housing in Falls Church. The shelter is the first of its kind in Fairfax County, a bright, 21st-century model offering 52 emergency beds for single adults, including four medical respite beds, 18 permanent supportive "micro-units,” an acute care facility, garden area and more.

According to Scheurer, Brian King who owns Artifice, Inc. in Arlington installed her design, with a bit of assistance from her, in the garden of the facilities' community dining room. The public can best see the community mural not from ground level, but down in the protected space accessed through the shelter, Scheurer shared. "This has been another great experience in painting for me. Very different from the original watercolor on paper,” said Scheurer. “The process is amazing.”

LIKE HER OTHER WORKS, whether mural, watercolor or exclusive limited edition, the well-saturated colors of the Bailey's mural depict significant events in surrealistic architectural and geometric structures, as well as symbols set in history, according to Scheurer. The mural is whimsical, a visual architectural narrative, "charging into the 21st century,” she described it; a journey for shelter residents, guests, and the public to peruse.

A significant incident occurred in November, 1861 that the New York Daily Tribune referred to as “The Great Review at Bailey's Crossroads,” recounted Scheurer. “Over 75,000 Union troops were reviewed by President Lincoln and approximately 75,000 spectators. Included in this assemblage was Julia Ward Howe, who credited the impressions made on her this day in part with her eventual penning of 'The Battle Hymn of the Republic' …The mural contains images of historical markers that depict numerous events. The area was a large federal encampment, and depicted in the mural is recognition of the earliest uses of observation balloons for intelligence purposes by the nation's first aeronaut, Thaddeus Lowe,” said Scheurer.

The mural’s precise forms and lines mesmerize the viewer and tell a somewhat whimsical story of Bailey's Crossroads. The shapes converge and overlay, with history moving left to right. "One of the more current significant icons of the urban transition at Bailey's presented in the mural is Skyline Towers, built on the site of the old Washington/Virginia airport that provides homes to hundreds of families and is the symbol of the modern and future Bailey's that will continue to grow and prosper," said Scheurer.

AFTER THE RIBBON-CUTTING, Scheurer and King pointed out a specific block in the mural, one to the far right. It would be something for residents and guests at Bailey's Shelter to aspire, "a place so important to us all," hinted Scheurer.