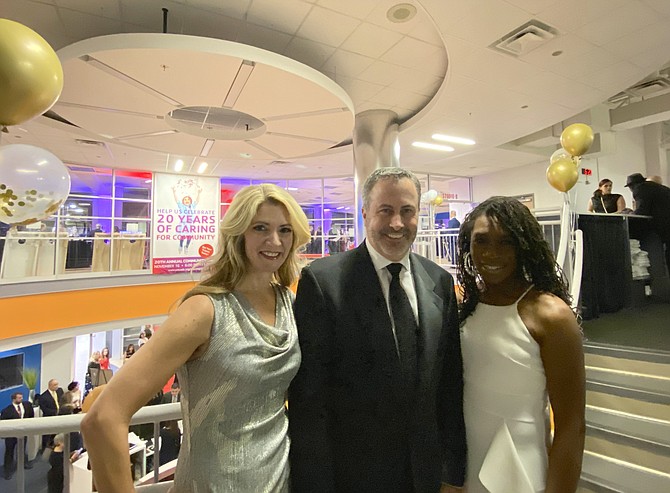 The YMCA Fairfax County Reston celebrated its 20th Annual Community Fundraising Gala Saturday evening, Nov. 16. The ticketed event featured cocktails, dinner, dancing, a silent auction, raffles and four award presentations. Once a year, the nonprofit organization opens the doors to the public to support the YMCA Scholarship Assistance Program and make a significant impact on the lives of children and families in the local community who count on vital YMCA programs and services.

According to the program description provided by Gala Co-chairs Valerie Romano and Sonia Castillo-Smith: "For more than 20 years, the YMCA has addressed some of our community's most pressing social issues…We work across the county, serving more than 12,035 members and program participants and providing more than $350,000 in financial assistance to 1,054 children and families to ensure they have access to all the YMCA offers, and no one is turned away.” This year's gala raised a little more than $200,000 as of Monday, Nov. 18 with more money coming in, reported Bianca Moskatis, Executive Assistant to David Rodriquez.

Doug Bushée of Reston, founder of CORE Foundation, attended the event. "This is another opportunity for us to give back to a nonprofit organization that is invested right here in Reston."

For Paul and Ellen White, their participation was the result of a direct link to the YMCA. "Our kids go to preschool here, and we enjoy the experience. The kids are thriving, and the Y has a fantastic cadre of teachers," said Paul White.

SUE RICHEY, Chairman of the YMCA Fairfax County Reston Board of Directors, welcomed all to the event during which David Tripp, Board Member, presented the first of four awards, the Barbara Aaron Triangle Award, to a local high school student. The award recognized a young woman who exemplified the YMCA's core values – caring, honesty, respect and responsibility. Other requirements included a minimum GPA and involvement in extracurricular activities at school and the local community. The award went to Catalina Musso, South Lakes High School.

The second award, introduced by Taralyn Kohler, Executive Director, CORE Foundation, was the Jim and Karen Cleveland Partnership Award established in 2012 by YMCA Fairfax County Reston. It recognized exceptional leadership in bringing community organizations together to better achieve the common good. Swim Team Dads in Reston, a nonprofit group, received the award. According to the organization's website, when they heard the statement, "There's so much good you can do while having fun and staying fit," they made it happen. A self-described, collective group of dads who enjoyed various activities, they thought, why not do something good while staying in shape or getting in better shape. The dads formed the 501c3 to allow "something good" to impact the community in which they lived.

The third award, the Boofie O'Gorman Volunteer Service Award, recognized an individual for her "exceptional commitment of time and resources to the fulfillment of the YMCA's mission and capacity to serve the Reston Community.” Emily Jenkins, Preschool Teacher, presented the award to Gramma Myrtle, who likes to be called by that name.

Introduced by Sue Richey, Board Chair, the final award, The Joseph L. Ritchey Community Service Award, was presented to Brandon Baker for his outstanding service and dedication through generous contributions and commitment to the Reston Community.

THE BOARD, staff and gala committee of the YMCA Fairfax Reston thanked the evening's sponsors, including Platinum Sponsors, James Lintott and May Liang, Hugh and Tana Taylor and TNS. They also thanked all attendees and volunteers. Without their support, the YMCA could not accomplish its mission "to foster the spiritual, mental and physical development of individuals, families and communities according to the ideals of inclusiveness, equality and mutual respect for all."