Council credited with past efforts and future plans at anniversary gala. 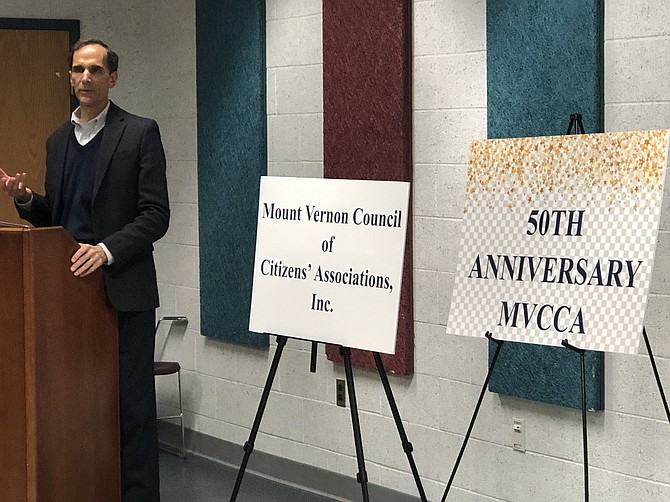 promoting the interests of its member associations and to further the common good and general welfare of the residents of the Mount Vernon Magisterial District.

The council, known familiarly as MVCCA, was recently recognized on their 50th anniversary by the Virginia House of Delegates and Senate for the council's efforts. They provide a forum for residents and groups to address concerns about land use, transportation, the environment, public safety, education, and housing, as stated on House Joint Resolution 1104.

At the anniversary celebration on Wednesday, Nov. 20, was Mount Vernon Supervisor Dan Storck (D), representatives from Virginia Delegates Mark Sickles (D-43) and Paul Krizek (D-44) and other officials and residents of Mount Vernon, recognized the anniversary. Mount Vernon has come a long way since the late 1960s, and MVCCA co-chair Lynn Pascoe noted that back then the area had inadequate fire protection, no libraries, no bus service, no hospital and no comprehensive plan for development. That’s the Mount Vernon that the MVCCA grew up in, and they pushed for change and laid out a plan.

“This was incredibly successful and laid the basis for a revitalization of our community. It also led to the recent EMBARK project,” Pascoe said. Co-chair Katherine Ward noted their efforts on EMBARK too. “We look forward to continuing to work with county staff , landowners and developers plus the SFDC and Chamber to create something special along Richmond Highway — our Main Street,” she said.

It’s one thing to plan, but some plans need a force to see them through, and Pascoe felt the MVCCA was that force back then and now. “We will continue to push for better transit, redevelopment of the Community Business Centers, undergrounding of Richmond Highway utilities, improved housing, and ensuring that new development fits into the plans’ long-term goals,” she said.

Storck has worked with the MVCCA for 15 years on projects and efforts around Mount Vernon, he noted. “I have seen firsthand the MVCCA’s unique ability to successfully influence legislators and mobilize residents on important issues that help make our District and the County a better place to live, work and play,” he said.

The MVCCA has worked with the Fairfax County Board of Supervisors and the Planning Commission help guide informed decisions regarding changes in traﬃc capacity due to the completion of the Woodrow Wilson Bridge Project at the Richmond Highway, Huntington Avenue, Old Richmond Highway, and Fort Hunt Road intersection. These are all transportation facilities that impact the businesses and residents of Mount Vernon.

At the anniversary celebration, there were plaques and credits handed out, recognizing 50 years of MVCCA achievements.