“Leto Legend” a heartfelt comedy about a supermom.

“I am intrigued by the modern day super-heroines. There has been a shift in superheroes that have gifts simply bestowed on them to ones who have to work and train really hard to become heroes, and these hard workers tend to be female,” said Helen Pafumi, artistic director, Hub Theatre. 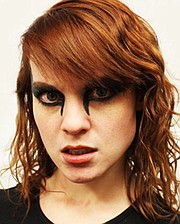 Carolyn Kashner as Nike Jones in the Hub Theatre production of “Leto Legend.”

Pafumi added, “It's just plain fun to direct a play about a super-heroine.” She will be directing the brand new, all female-cast, “Leto Legend” by Kristen LePine, the Hub’s summer offering.

LePine’s “Leto Legend” began as a reaction and commentary to things I read, heard, and personally experienced about balancing career and family, and the pressures (fair and unfair) we place on ourselves and others on a quest to be “super.”

The comic play compares “contemporary superwomen to mythical ones” as it features, Charlie, a contemporary mom and comic book creator with Leto, her mythical/comic alter-ego, noted LePine. The new comedy asks how does Charlie do it all? Is there even a way she can stop herself? After-all, can juggling all she does, really be healthy?

Carolyn Kashner plays two characters -- Nike Jones and Hera. According to Kashner, “Nike is this extremely hip, slang-slinging web personality.” She is very active on social media and in the Comic Con sphere. Hera is the “Queen Diva of badness” with plentiful super powers.

Valerie Fenton plays both the Charlie and Leto characters. Fenton calls them mirror image reflections; both “single mothers who also have commitments to their respective careers; struggling to balance” everything. And they are up against “preconceived notions and prejudices against them from others.” For Fenton, the comedy touches upon “a very timely issue in our society” as women battle to be “empowered to have both motherhood and career.”

LePine has set out to have “laugh and enjoy the epic aspects of the productions – the blending of the two worlds. I hope they want to continue to the conversation about work/family issues, and I hope when they leave they are kinder to themselves and others.”