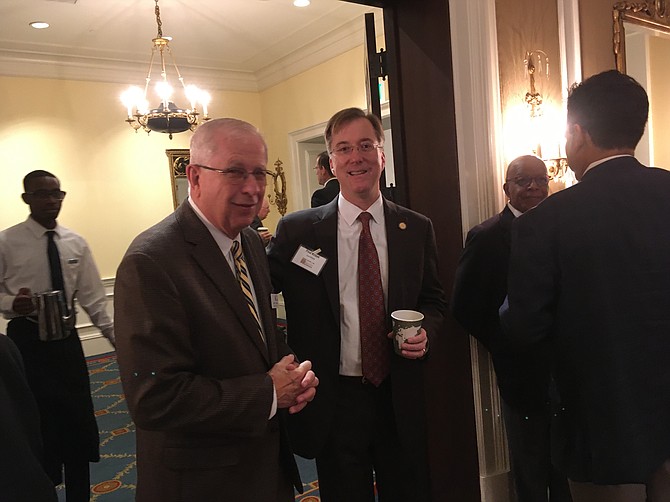 Although the Washington Nationals playoff victory at 1 a.m. that morning was still fresh on many minds, the candidates at the Mount Vernon-Lee Chamber of Commerce candidate forum had other things to highlight, ranging from transportation, the minimum wage and abortion when they took the podium early on Oct. 10 at the Belle Haven Country Club.

Del. Paul Krizek (D-44) is running against Richard Hayden in the 44th District, which encompasses most of Mount Vernon. Krizek grew up in the area, went to Groveton High School back when it still existed, and has been in office four years as a delegate. “Our school system is probably the

best in the country,” he said, before talking about a bill he’s brought up before the assembly to protect seniors when they are banking.

“I had a successful four years,” he said. “It’s an honor to serve you.”

Richard Hayden took the stand, and talked about potholes, business and the difficulty raising minimum wage. “I’m honored the Republican party has chosen me to be their candidate,” he said. There has been a proposal afloat for the minimum wage to be $15 an hour, but he said that “will break the back of small businesses.”

The wage a business pays should be determined by the market, he said. “Government can’t come in and force that, it has to be the market,” he said. The recent money taxpayers have received from the Commonwealth of Virginia was the result of a Republican effort, Hayden said.

Next were life issues, and this led to his stance on abortion. In past years, his son’s girlfriend got pregnant but chose to have the baby, which Hayden supported. “I’m a grandfather because I supported her,” he said.

Next up was Steve Adragna, who is running against Kathy Tran (D-42) in the 42nd district, which includes a little of the Mount Vernon District, Lorton and West Springfield. Adragna was in the Army for 15 years, and another 13 years of experience working for the Department of Defense. He is against some of the government “intrusions,” as he called it.

Tran was not present at the event. “I disagree very strongly with her initiatives,” he said. “We need to build a true opportunity society here in Virginia,” he said.

After the speeches, everyone broke into small groups to discuss topics, which included transportation, commerce, education and environment. It was another opportunity for the candidates to highlight their issues, but a new method of discussion for the chamber.

“We wanted to try something different, you get a one-on-one chance to speak with the candidates,” said Chamber President Stanley Koussis. “People talk to each other, that’s what’s successful in the Mount Vernon corridor,” Koussis said.