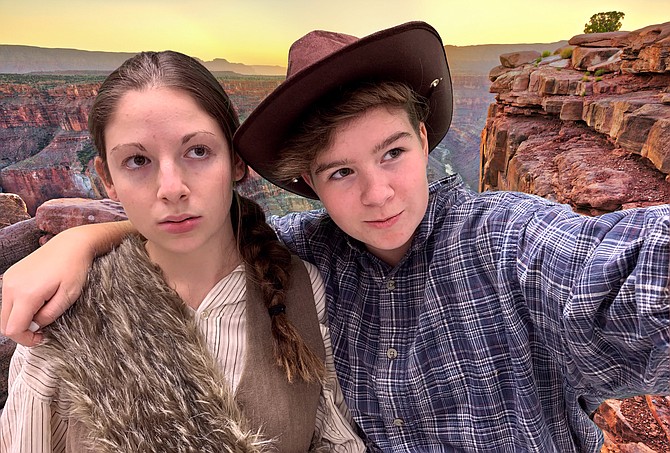 Stick around Oakton High School some time, long after the last bus has left and even the after-school clubs are letting out. Walk down the hall from door 5 – nice place, isn’t it? Take it all in. Soon, the new renovation construction will end, and…

If so, that was probably Madison Shannon, on her way to after-school rehearsals for the first play kicking off Oakton’s season. “Men on Boats” is the story of Ten explorers. Four Boats. One Grand Canyon. It tells the true(ish) history of John Wesley Powell’s expedition down the Colorado River. Playwright Jaclyn Backhaus has written the play with an all female cast, something rarely seen on stage these days. “Powell is so complex,” says Shannon. “When I first read for him, I was interested, but unable to connect with a deeper level of his emotions. I couldn’t find more than the inspiring leader. I’ve had to spend so much of rehearsals debating with myself and my directors about him and how he is, and my image of him has slowly but surely developed.”

SHANNON had a strong answer for questions surrounding the all-female cast. “To know we’re telling the story of history that women weren’t allowed to make is so challenging but special. We want to properly get across the stories of these men and the expedition they went on. It’s a matter of exhibiting women’s power whilst exhibiting the men we play.”

On her lack of a second arm, Shannon says, “I’ve had to push myself physically. I knew if I was in ‘Men On Boats,’ no matter what role I got, I would have to be very active and have good endurance to make the show believable. But Powell only has one arm, so the physical scenes are two times harder than they would’ve been.”

Other actresses have felt similar challenges in their roles, and have striven to overcome them. “There’s certainly a disparity between “I’m a 16 year old girl from 2019 and wouldn’t last 10 minutes outside” and “I’m a 29 year old man in the 1880s and could kill a bear with a piece of twine and a button,” says junior Anna Kruse, who plays adventurer John Colton Sumner. “It’s also a side of acting I’m personally not used to because instead of having fun making up a backstory for a fictional character, I have to check the Wiki before making any sort of large character choice and try to stay true to the source material.”

John Powell is also aided on his expedition by a right-hand-man, portrayed by Oakton senior Becky Woolf. “I play William Dunn, who is a hunter/trapper/innovator. He acts as the unofficial second-in-command (although he thinks he knows better than the CO).”

When asked what the most meaningful part of the creation of the show has been for her, Woolf replied, “Definitely getting to bond with the cast. We only have sixteen students acting/directing ‘Men on Boats,’ so we have gotten to spend a lot of quality time together.”

THE UNYIELDING student dedication to the show goes beyond the main stage. In the technical theatre crew, Katelyn Marshall’s team is working every day to make the main set all it can be. On designing the set, she mused, “Our greatest challenges were size and realism; it’s nearly impossible to replicate something like the Grand Canyon, both because of its scale and natural beauty. Our crew is working hard to take advantage of the perception of the audience, and to create set pieces that imitate the colors and shape of the canyon’s interior.”

One of “Men on Boats’s” immensely talented directors, Camila Martinez, has the closing words. “What I want audiences to look forward to when they see MOB is definitely the boat scenes. Everything is very physical, imaginative, and engaging. They should also look forward to the music that helps capture the image of these ‘men’ on the rapids.”

You don’t have to take her word for it. “Men on Boats” is hitting the Oakton theater early this November.

If you want to accompany John Wesley Powell and his crew on this wild adventure, come see “Men on Boats” at Oakton High School on Nov. 7, 8 and 9 at 7 p.m. Visit www.oaktondrama.org for ticketing and information.