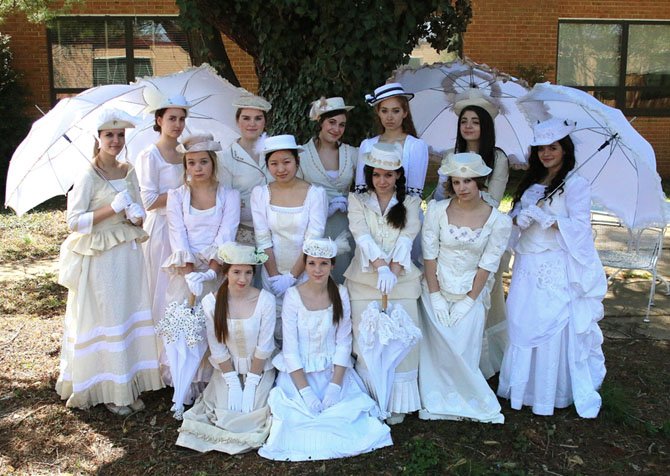 Ahoy, mateys! There are pirates on the horizon – but this bunch sings, dances and makes people laugh. And they’re all in Oakton High’s production of “The Pirates of Penzance.”

It’s a satiric operetta about a group of inept pirates off the shore of Cornwall, England in the 1880s. And they’ll commandeer the stage, this Thursday-Saturday, May 15-17, at 7 p.m. Tickets are $10 at the door.

The story’s about Frederic, who was accidentally placed on a pirate ship as a little boy and becomes one of the pirates. He’s freed on his 21st birthday and meets and falls in love with a woman named Mabel. But he then has to decide who’ll have his allegiance – her or the pirates.

Senior Eric South portrays the Pirate King, who leads the pirates. “He’s a romantic and not very good at being a pirate,” said South. “He’s burly and tries to be menacing, but he can’t pull it off. He’s too much of a goof and a hopeless romantic. I love playing him because the role’s so physical and he’s big and blustery. I get to lunge and move all over the place.”

His favorite number is “The Pirate King,” which he sings. “I’m moving and jumping around and it’s a vocally demanding song,” he said. “It’s a good way to jump-start the show and energize the audience. They’ll enjoy the show because it’s lighthearted and jokes about the time period. They’ll have a good time escaping from everything and laughing about what’s happening onstage. And at the same time, there’s really beautiful music.”

PLAYING MABEL is sophomore Megan Griggs, one of 13 daughters of a major general. The pirates want to marry all the girls, but their father objects. “Mabel’s self-centered and likes showing off,” said Griggs. “She always wanted to fall in love and, when Frederic arrives, she’s like, ‘Finally, somebody for me.’ Most of the time, her sisters are annoyed with her, but they love her anyway.”

Griggs is enjoying her part because “Mabel’s not me, and that’s why I act – to be someone else – and her songs are just wonderful. My favorite is ‘Poor Wandering One,’ which I sing. It’s really funny and the vocals are difficult and challenging. Mabel’s sympathizing with Frederic’s situation and sets up the rest of the show. All the music’s great and the cast is so wonderful that it’s a terrific show, overall. It’s hilarious, British humor that everyone can appreciate; there are lots of puns and physical humor, too – it’s fantastic.”

Senior Thomas Hinds portrays Frederic. “He’s been at sea constantly since age 8, so he’s naïve; all he knows is the pirate life,” said Hinds. “He’s never seen a woman until he comes to Cornwall. He’s a bit shy, at first, but excited when he meets Mabel. Then the pirates tell him he was born in a leap year and is really only 5, so he still owes them his service. He’s upset about it because he loves Mabel, but he feels honor bound by his duty to the pirates.”

Frederic’s fun to play, said Hinds, because “he’s really passionate and invested in everything he’s doing. He’s sincere, makes big motions and his singing is over-the-top. He has a really big range and pretty ridiculous notes and chords.”

Hinds likes singing, “Away, Away, My Heart’s on Fire,” with South (the Pirate King) and Savannah Hard (Frederic’s former nanny). “It’s ominous because we’re planning to kill the major general for lying to the pirates,” said Hinds. “It’s got a real mix of emotions and is very intense.” On the whole, he said, “The show’s witty, the music’s catchy and our set’s fantastic – it looks like we’re in 19th-century England and on a pirate ship.”

SOME 15 STUDENTS designed and built the set. “We created the pirate ship, rocky shore and exterior of the major-general’s house,” said sophomore Cait Spiegel. It’s 6x30-feet, and classmate Caroline Brogan said the ship’s “sheer size” was daunting. “But it was great seeing our vision come to life,” said senior Grace Yoder, stage manager and construction-crew member.

“I liked building the slide best,” said Brogan. “It goes from one deck of the ship to the other and will surprise the audience.” Senior Ann Sperow liked attaching the ship’s steering wheel to the boat because “the pirates can control it and it makes the ship [become real].”

Regarding costumes, women will wear long dresses, bustles, corsets and hats; the Pirate King sports a brocade jacket and vest, while younger pirates wear burlap pants. And a fight choreographer taught swordplay to the pirates.

There’ll be a 24-person pit orchestra, and the cast and crew of 60 have rehearsed since February under Director Vanessa Gelinas and Vocal Director Tiffany Powell. “They’re doing really well because we have the caliber students who can do this vocally, as well as act,” said Powell. “They’ve risen to the occasion, but people will also enjoy this show because it’s so funny.”

“Tiffany and I collaborated and shared some of our students; and adding the orchestra and band kids, we became a strong performing-arts family,” said Gelinas. “That’s what makes this show so successful. And the audience will love the energy and beautiful music. They may have heard of this show, but have no idea what it is. Gilbert and Sullivan wrote the music and book and are so smart and witty. So it’s an opportunity for people to fall in love with their work, and we’re the first in Fairfax County to do this show in the last decade.”