Get on the Mat, Boys
Votes

Get on the Mat, Boys

Raising awareness of the benefits of yoga for men during National Yoga Month. 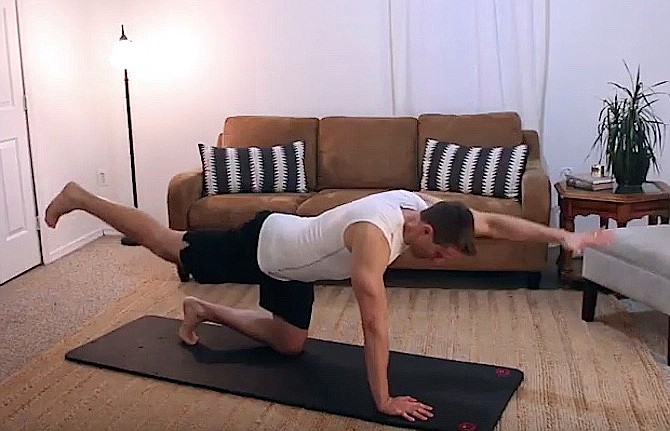 Take a quick scan of most yoga classes at East Meets West Yoga Studio in Vienna, Virginia, and you’re likely to see the mats being occupied primarily by women. That is changing, says studio owner Dawn Curtis. A recent Harris study shows that while women make up more than 70% of yoga practitioners, the number of men has increased from 4 million to ten million over the last 7 years. Practitioners are working to raise that number even higher this September – which is National Yoga Month – by emphasizing the health benefits for men.

“We’ve seen an increase of men in yoga classes, but also an increase in the number of male yoga teachers and men who are coming into our yoga teacher training program,” said Curtis. “We’ve had a lot of older men of the Boomer age taking classes because they’re realizing that the exercise routine that they’ve been doing hasn’t increased their flexibility.”

Because yoga classes often begin with an inward focus, those who practice it might be more inclined to develop body mindfulness off-the-mat. Exercising bodily-awareness during activities such as weight lifting can help prevent injury.

“Everything about modern convenience is geared toward making it easier for you to meet your basic needs without moving,” continued Elliot. “As we age, often what happens is we move less, thus becoming stiff.”

“Yoga makes you more flexible and your muscles and joints are more lubricated, you’re less prone to injury,” added Curtis.

The practice’s reputation as stress reliever is credited with the uptick in male students. “I’ve seen men use yoga as a stress management tool,” said Curtis. “Men don’t always realize how stressed they are until they start talking yoga classes. Anytime you’re doing yoga, you’re going to have stress management and relief.”

“Just one yoga class has proven to lower cortisol [stress] levels,” added Luann Fulbright, Director, Dream Yoga Studio & Wellness Center in McLean. “I also have worked privately with many students on anxiety and panic disorders with success. This is a dominant reason folks come to yoga.”

Improvement in sleep is another asset to be gained from adding a yoga practice to one’s life, says Curtis. “Yoga can lead to better sleep patterns because the mental stress that we have is held within the body,” said Curtis. “Once that’s released you can relax, fall asleep and stay asleep.”

An overall sense of well-being is subtle, but definite benefit of yoga, advises Curtis. “Yoga provides more balance, men typically musical their way through things which means over-activity,” she said. “Yoga teaches them to slow down and not push their way through. I often hear people say, ‘Yoga makes me a better person’. That’s because they’re less reactive because they aren’t feeling stressed. You have to do it on a regular basis though to benefit from it.”