Gunfire Exchange in the Town of Herndon
Votes

Gunfire Exchange in the Town of Herndon 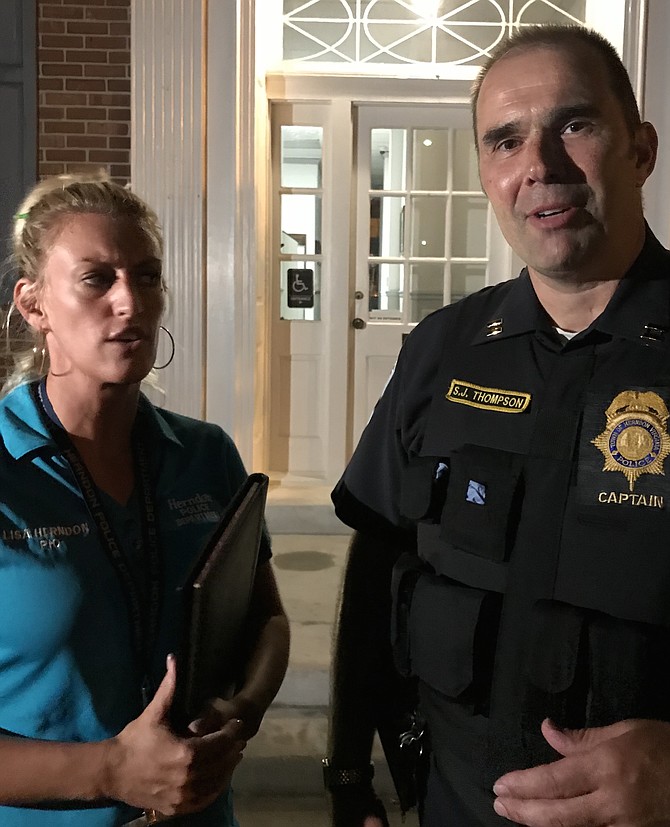 Captain Steve Thompson, Commander of Field Operations at Town of Herndon Police Department and Lisa Herndon, Public Information Officer step up to the Media Staging Area in front of the Old Town Hall building at Station and Elden Streets, Monday evening, Sept. 2, after an HPD officer encountered robbery suspects nearby and was involved in a gunfire exchange. Photo by Mercia Hobson.

Two suspects are in custody as of Monday evening, Sept. 2 after a shooting involving a Herndon Police Department officer who was responding to a report of an armed robbery. Nearby residents reported hearing 8-10 gunshots.

According to Captain Thompson, at approximately 7:27 p.m., Monday, Sept. 2, a Herndon police officer on regular patrol, followed up on a report of an armed robbery in progress in the vicinity of Locust and Spring Streets. The officer encountered suspects outside and was involved in a gunfire exchange near Locust/Spring. No one was shot. One suspect was captured. A short time later, HPD responded to an attempted carjacking in the 1000 block of Elden Street. A second suspect was captured.

During the media briefing question and answer period, Thompson stated that the business which the suspects were robbing had people inside it at the time.

Both suspects are in custody, and there is no threat to the community. Investigations at the scenes continued through the night. For official updates, visit twitter.com/HerndonPolice.