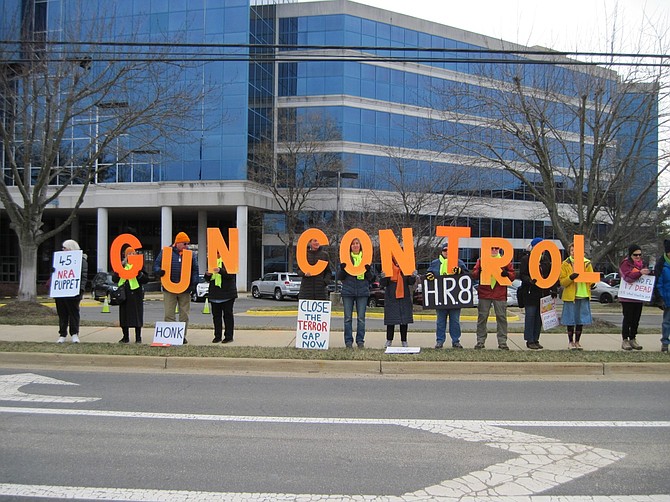 While many folks hand out little boxes of candy sweethearts scribed with brief love notes in capital letters on Feb. 14, community activists of the Herndon-Reston Indivisible spell out “gun control” in large orange letters and all caps on Valentine’s Day for the National Rifle Association at 11250 Waples Mill Road and the motorists who drive past. Photo courtesy Karen Higa

Community activists of the Herndon-Reston Indivisible spell out “Parkland” in all caps Feb. 14 at a candlelight vigil in Fairfax that marks a year since a school shooting in south Florida claimed the lives of 14 students and three educators on Valentine’s Day 2018.

Herndon dentist Dr. Ibraheem Samirah, left, waits to be introduced by Martina Leinz, president of the Northern Virginia Chapter of the Brady Campaign To Prevent Gun Violence at a candlelight vigil held Feb. 14 to pay their respects to 17 people killed and 17 injured Valentine’s Day 2018 at the Marjory Stoneman Douglas High School in Parkland, Fla. Falls Church activist, Kris Gregory, of the Concerned Citizens Against Gun Violence holds a protest sign for participants. Samirah won the Feb. 19 special election for Virginia House of Delegates District 86 and filled the unexpired term of Virginia Sen. Jennifer B. Boysko (D-District 33). 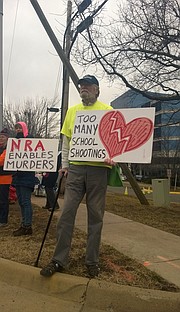 Bob Hatfield of Vienna protests gun violence at the National Rifle Association Feb. 14 on the anniversary of a Valentine’s Day massacre that killed 17 people and injured 17 more in 2018 at the Marjory Stoneman Douglas High School in Parkland, Fla. For six years, the 80-year-old retired consultant has walked a journey with other activists, who decry gun violence and press lawmakers to keep firearms out of the hands of criminals and the mentally ill.

The nation’s largest gun rights lobby received two visits Feb. 14 at its headquarters in Fairfax from protesters on the anniversary of the Valentine’s Day massacre at a south Florida high school — where 14 students and three faculty members were fatally shot and 17 people injured before classes ended for the day last year at the Marjory Stoneman Douglas High School in Parkland.

The morning protest drew more than a hundred area residents who stood along the sidewalk at 11250 Waples Mill Road and another one across the street. Most belong to various concerned citizens groups in the area, who meet every month on the 14th to hold protest signs for passing motorists.

Others simply are tired of doing nothing about stopping gun violence and simply want to do something — even if it’s just holding a protest sign for an hour and casting a ballot on Election Day.

Thursday was their 74th consecutive stand at the National Rifle Association for victims permanently silenced by gun violence.

Vienna resident Bob Hatfield counts himself among the grassroots activists who have gathered each month in a peaceful and nonviolent manner at the NRA since Dec. 14, 2012 — when a 20-year-old gunman killed 20 school children and six adults at the Sandy Hook Elementary School in Newtown, Conn.

The 80-year-old retired consultant, who attends a church in Oakton, volunteers for the gun violence prevention committee at the Unitarian Universalist Congregation of Fairfax and helps organize a bus trip each January on Martin Luther King Day to the statehouse in Richmond for the annual anti-gun violence rally, where fellow activists honor the slain civil rights leader by calling on Virginia lawmakers to pass “sensible” gun legislation.

Hatfield is pleased the number of supporters are growing. When asked about his long-term journey to prevent future deaths from gun violence, Hatfield says the large print on the back of his bright yellow T-shirt he wears on Valentine’s Day tells the whole story: “It’s a marathon, not a sprint.”

PROTESTERS MARKED a milestone Thursday in their six-year push to stem the tide of gun violence across the country. For the first time since the Sandy Hook massacre, proposed legislation was discussed at the federal level Feb. 6 at a U.S. House Judiciary Committee hearing called “Preventing Gun Violence: A Call to Action.”

In his opening remarks, Committee Chairman U.S. Rep. Jerrold L. Nadler of New York (D-10) noticed how citizens of all ages and occupations have been organizing and demanding action nationwide. As a result, several states have strengthened their gun laws. He added: “For too long, Congress has ignored the epidemic of gun violence that plagues this country. After a particularly heinous mass shooting, we sometimes pause to offer a moment of silence to honor the victims. But we do not need another moment of silence. We need a moment of action. Today’s hearing is the first step toward that goal.”

More than a week later, Nadler’s committee approved H.R. 8 — the Bipartisan Background Checks Act of 2019, which helps close the gun show loophole by requiring background checks on all firearms sales. Buyers can visit licensed firearms dealers to run the necessary background checks before the weapons transfer is finalized legally. Exemptions include gifts to family members and transfers for hunting, target shooting and self-defense, according to a committee press release.

Northern Virginia activist Karen Higa of Falls Church said: “The Sandy Hook shooter got his guns from his mother.” She points out the bill offers another loophole that needs to be closed. Higa joined the monthly protests at the NRA about four years ago and volunteers for various anti-gun violence coalitions.

Another bill — H.R. 1112 — also was approved Feb. 13 by the House Judiciary Committee. The Enhanced Background Checks Act of 2019 addresses a flaw in the National Instant Criminal Background Check System.

However, under current law, a buyer can be sold a firearm through a “default proceed” transaction that allows the sale if NICS fails to issue a report after three business days, Nadler explains.

The congressman backed his case with an example from a 2015 hate-crime in which a gunman killed nine people at the Emanuel African Methodist Episcopal Church in Charleston, S.C.

The shooter, Nadler said “was not legally allowed to possess a firearm as a result of drug charges, but he still was able to purchase his gun from a licensed dealer, who made the decision to transfer after three business days had elapsed, despite not having received a definitive response from the background check system.”

NRA protesters expect both congressional bills will be approved by the House of Representatives but shot down by the U.S. Senate, which is under Republican control.

ALTHOUGH FEWER PROTESTERS attended the candlelight vigil Thursday evening, many of the morning activists returned — including a grassroots group called the Herndon-Reston Indivisible. It was formed to “resist bad policies of the Trump administration,” said Reston retiree Joanne Collins, 64.

Kirk says she leads her school’s anti-gun violence initiative and is co-president of the Northern Virginia chapter, which started with 10 students and has grown to 500 members at other chapters throughout the District, Maryland and Virginia. Her goal this year is to slowly chip away at the laws that don’t make sense — “one bill at a time,” she said.

Before introducing guest speakers Feb. 14, Martina Leinz, president of the Northern Virginia Chapter of the Brady Campaign To Prevent Gun Violence, was asked if she felt the recent scandals of Gov. Ralph S. Northam and Lt. Gov. Justin E. Fairfax have set back their cause.

She answered: “Not at all.”

Leinz balked at the Republican-led General Assembly committees that “summarily dismissed a package of very sensible modest measures that would have protected the public and made Virginia safer,” she pointed out.

Several times in the past year, activists have chanted a slogan they have heard Northam say in his call to action speeches: “If you can’t change their hearts, change their seats.”

In November, Northern Virginia voters put a Democrat in a Republican stronghold from which U.S. Rep. Jennifer L. Wexton (D-10) is serving her first term in the 116th Congress.

The political “blue wave” had a ripple effect Jan. 8 at a special election to fill Wexton’s vacant seat in the Virginia Senate. Jennifer B. Boysko (D-33) won that race.

Herndon dentist Ibraheem S. Samirah is the unofficial winner of the Feb. 19 special election to fill Boysko’s unexpired term in the House of Delegates District 86 — which includes parts of Fairfax and Loudoun counties — according to unofficial results posted Tuesday night by the Virginia Department of Elections.

At age 27, Samirah is the youngest of the three candidates. The dentist wants tougher laws against gun violence.

“We need implementation so that legislators across the aisle can understand human lives are impacted by the prevalence of guns,” he said at a candlelight vigil Thursday night at the NRA.

It’s a busy campaign year in 2019 for the both Virginia House of Delegates and Senate — which has a primary election June 11 and a general election Nov. 5. In 2017, the balance of power shifted toward the Democrats. Virginia Republicans have a slim majority overall in the state legislature.

“We are on the precipice in November of taking control of the house and senate,” Leinz said Feb. 14.