Senior Sharks Have A Ball at Northern Virginia Senior Olympics

Women's 8-ball pool competition is one of 60 events in 25 venues for the NVSO. 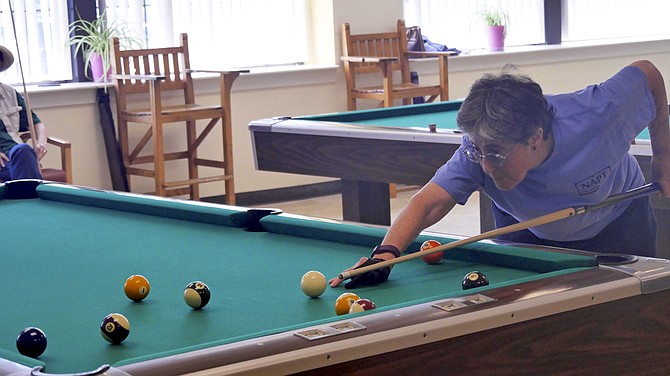 Britanya Rapp from Arlington sets up a difficult shot. Photo by Shirley Ruhe. 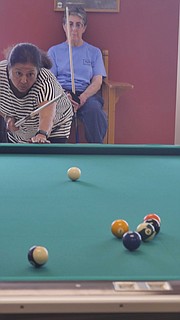 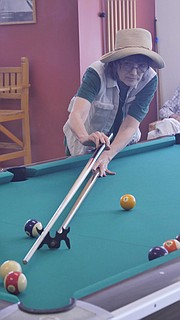 Shelley Wade from Arlington is practicing her pool shots before her competition arrives.

The room is silent except for the crack of the pool balls at Lincolnia Senior Center on Monday, Sept. 16. It is the women's 8-ball pool competition, one of 60 events hosted in 25 venues by the Northern Virginia Senior Olympics (NVSO).

James "Rip" Westray, event coordinator, lays out the rules. "No coaching by husbands or friends or you are automatically disqualified, although you may help your opponent if you choose." Also, he explains that to start the game, you may choose flipping or lagging.

Kanchan Garg, from Arlington, is paired against Britanya Rapp, also from Arlington, in the 60-69-age category. Garg says she has been playing off and on for eight years. "Somehow I had a fancy for it."

Diane Hill from Springfield is paired against Betty Roadcap from Ashburn in the 80s age category. Hill says she has been playing for more than ten years. "My husband took it up when he retired and I took it up, too, because I liked being with him." She adds, "At first I was afraid of it."

Roadcap says she has been playing pool for 35 years.

Strategy? Hill says, “I just feel lucky when I can hit the ball."

The game begins with the snap of 15 balls, seven striped balls and seven solid and one eight ball.

Steve Slinker, husband of one of the contestants, explains that the first person to get all of her balls in the pocket, and then the eight ball, wins. "But if you accidentally hit the 8 ball first, you lose." Slinker says it is a good game for old people. You have to stretch and walk a lot and be coordinated."

In between are the softball hit and throw, swimming and diving, tennis and horseshoes, corn hole toss, bocce and the fastest growing sport, pickleball. If you'd rather sit and think, there is duplicate bridge, cribbage, Bunco, scrabble and jigsaw puzzle, a new game this year. Or you could challenge 96-year-old Eva Sorenson in Mexican train dominoes (if you dare.)

The senior games are for seniors 50 years or older in the cities of Alexandria, Falls Church, and the counties of Arlington, Fairfax, Loudoun, Fauquier and Prince William. NVSO began in 1982 with about 80 competitors. In 2019, the registrants broke the record, with over 800 registrants.