‘I’ve Been Blessed, and I Try to Give Back’
Votes

‘I’ve Been Blessed, and I Try to Give Back’ 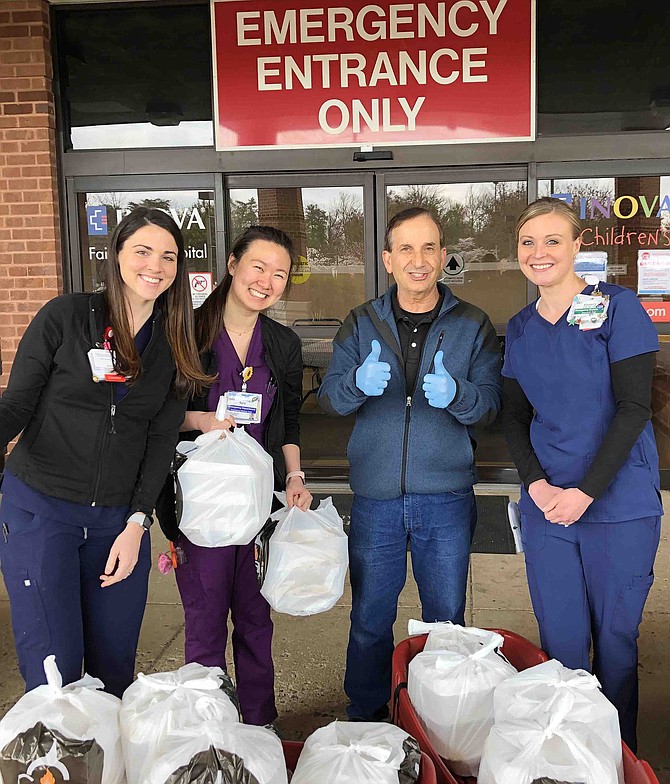 Sal Speziale hasn’t stopped working in four weeks – but that’s OK with him, because he and his award-winning Italian restaurant, Ciao Osteria in Centreville, are busy feeding the frontline fighters of COVID-19. Since March 17, he’s provided free lunches and dinners to doctors, nurses, firefighters, sheriff’s deputies and police, and he doesn’t plan on quitting anytime soon.

“In the military, they teach you to keep going and not rest until you’ve accomplished your task,” he said. “And we’re going to keep doing this until everyone’s well again and we can go out into the sunshine and be near each other again.”

Actually, running a restaurant is Speziale’s third career. He spent 14 years in the Air Force, where he was a fighter pilot, flying F-15 Eagles. Next, he was an American Airlines pilot for 32 years, only recently retiring.

“I was born in Italy, and poverty makes me appreciate what this country has given me,” said Speziale. “The community’s been great to us, so we want to give back. This is our way of helping.” And he’s doing it via Ciao’s mouthwatering lasagna, meatball sandwiches, pizza, chicken marsala, Caesar salad, spaghetti, chicken pasta Alfredo and even gelato.

But he’s always thought of his community, even when times are good, giving employee discounts to first responders. So when COVID-19 dramatically changed everyone’s lives, it was natural for Speziale to help further. “Doctors and nurses are on the front lines,” he explained. Until restaurants were ordered to close their dining areas, business at Ciao was booming. But the March 16 edict only allowing 10 diners at a time forced Speziale to lay off almost 60 percent of his 65 staff members.

THEY NOW WORK ROTATING SHIFTS and he helps those short on funds. Curbside and delivery orders have been strong, so he’s rehired four employees, but he’d like to bring them all back. “We’re family,” he said. Meanwhile, on March 17, he called Fair Oaks hospital’s ER department and asked if anyone was providing their lunches.

“They said ‘No,’ so we brought 12-14 large pizzas for them,” said Speziale. “When we gave them the pizzas, they had the biggest smiles, and it gave me warm feelings. So we returned with food the next day, too. I also asked [Fairfax County] Sheriff Stacey Kincaid to send deputies to pick up food, and we gave them pizzas and salads for their office.”

He’s now feeding 75-175 meals/day to doctors, nurses and other first responders, seven days a week. Initially, knowing Ciao was struggling, guardian angels in the community helped out. Two people left $750 and $400 tips, which their servers shared with coworkers. Others gave 200-300 percent tips.

One Ciao’s fan anonymously donated $5,000 for the employees. Another handed Speziale $200 for his staff. “It’s so touching, the support and love we’re receiving,” he said. “So how could we not take care of the first responders?”

Those donations certainly helped – and Speziale’s extremely grateful for his customers’ generosity. But with all the free meals he’s providing, the funds only went so far. March 18 and 19, Fair Oaks hospital’s ER received lunch and dinner from Ciao. “My wife Gina was a labor-and-delivery nurse there for 24 years, so we thought of them first,” he said.

He soon included Inova Fairfax, but he had to alternate its meal deliveries with Fair Oaks because he didn’t have enough money to feed both hospitals. Then on March 23, all Virginia restaurants were ordered to close, except for takeout and delivery.

That day, Speziale started a Go Fund Me account: https://www.gofundme.com/f/vh2v8-feeding-first-responders. His goal’s $100,000 and he’s already raised more than half, with 100 percent of the donations going toward food purchasing,

ON FRIDAY, he fed pizza to police officers and dinner to Centreville’s Station 38 firefighters. Then a Fair Oaks nurse gave him $400 she’d collected from neighbors and asked him to feed that hospital’s housekeepers, janitors and ER staff. She also handed him thank-you cards made for them by local children.

“It wasn’t enough money, so we matched it and fed them dinner,” said Speziale. “One housekeeper, in tears, told us nobody ever takes care of them like that.” Then on Saturday, he brought lunch and dinner to the Fair Oaks Intensive Care Unit, lab and security staff. “We’re trying to spread it around,” said Speziale. He also fed the firefighters at Centreville’s Station 17.

“I love helping people,” he said. “I’ve been blessed, and I try to give back a little of what’s been given to me.” He noted that, “When people get pickups and deliveries from us, it keeps our employees working and kitchen cooking so we can provide food to the first responders until this is over.”

Throughout Speziale’s adult life, the message in John Greenleaf Whittier’s poem, “Don’t Quit,” has guided him: “Stick to the fight when you’re hardest hit; It’s when things seem worst that you must not quit.”

“We’re going to come through this; failure is not an option,” said Speziale. “People are starting to work together. This country has problems, but it’s still the greatest country in the world. We’ll fix it, slowly, but surely – it can’t rain forever.”