Lawn Business Picks Up During Pandemic 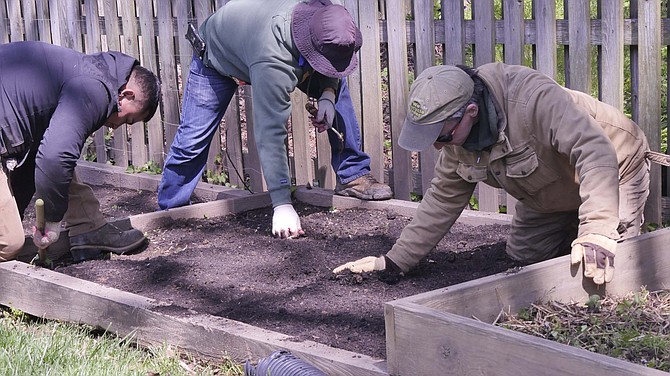 The shiny red work truck pulls up to an Arlington residence. Tom Hayes and his workers from Edible Landscapes get busy prepping several garden beds in a backyard on April 16. “Honestly, I’ve had more requests for estimates this year than ever.” Hayes started his Northern Virginia business in 2007

“People are stuck in their house and don’t like the way their yard looks. They want to see something nice while they’re trapped.”

Hayes says people are also looking out for food security, afraid of when groceries might run out. “There has been a spike in people wanting vegetables.” This year Hayes cleaned out his greenhouse that he had been using for storage and planted fifty trays of every kind of vegetable and flowers. “Then I hand the customers a ‘ready to grow garden’ and can advise them on what to do.”

Hayes has come with five workers today. One of his long-time workers and driver is at home, afraid to come out due to the coronavirus. “He has a newborn at home, although I don’t think it’s much risk working outside like this.” However, the workers today wear masks, but not the ones Hayes ordered before “this whole thing started. Now I can’t find the masks anywhere.”

The pungent smell of the premium compost mix wafts around the yard as the workers pull out the violets and weeds in the garden squares in preparation for mixing the compost into the soil. Then it needs to sit and age for a bit and a couple of rains until it is time to plant the garden.

Tomorrow, Hayes has another vegetable bed prep for tomatoes, okra, peppers, cucumbers, “pretty much anything that can be grown around here. Herbs, too.” And, he adds, “people are buying fruit trees, too – Asian pears, figs, sweet cherries and paw paws. They taste like a tropical fruit somewhere between mangos and bananas, but are a hardy local fruit growing along the C&O canal. And blueberries, and people really love their strawberries. Like I said, they just want food.”