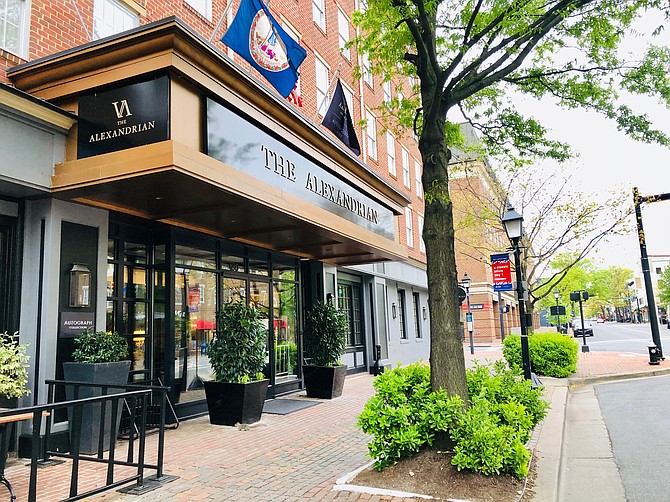 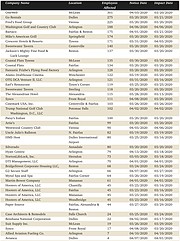 Businesses across Northern Virginia are flooding the Virginia Economic Commission with thousands of layoff notifications, an indication of how deep the region’s economic uncertainty is becoming as the COVID-19 crisis continues its devastating path. Since the beginning of March, the commission has received notification of about 5,000 layoffs in Northern Virginia. That’s more layoffs in one part of the state than all the other regions in Virginia combined.

“The numbers are really sobering,” said Phil Hernandez, senior policy fellow at the Commonwealth Institute for Fiscal Analysis. “In the last four weeks, we’ve seen more than 400,000 people in Virginia apply for unemployment insurance. And I think that speaks to the really challenging economic conditions we’re facing.”

The official layoff notification letters are required by a 1988 law known as the Worker Adjustment and Retraining Notification Act. Under normal circumstances, the law requires employers with 100 or more employees to provide 60 day Worker Adjustment and Retraining Notification to state officials of mass layoffs or plant closings, giving officials at the Virginia Employment Commission an opportunity to help workers retrain for different jobs or beef up their resumes. But the rapid-fire nature of the current economic crisis forced many businesses in Northern Virginia to provide notice the same day as layoffs or even after the fact.

“This is not normal,” says Malissa Short, Virginia Employment Commission. “They put the letter in the mail as they were turning off the lights and exiting the building.”

The 60-day notification is a legal requirement for mass layoffs that are permanent. But many of the notifications the Employment Commission is now receiving are for layoffs that might end up being temporary, and businesses are trying to figure out the best way to handle all their requirements in a rapidly changing environment.

For example, the Alexandrian Hotel on King Street laid off 115 employees on March 13 then sent an official WARN notice 15 days later.

“While we believe the layoff will be temporary and may not trigger state or federal WARN Act notice requirements, we do not know what the future will hold,” wrote Nicole Pinkham, Human Resources director at the hotel. “The COVID-19 pandemic has crippled the company’s business and businesses around the country, causing notice to not be foreseeable at the time that notice would have been required to be given.”

THE LAYOFF NOTIFICATIONS show some industries are being hit harder by the pandemic than others. Restaurants, hotels and other consumer-oriented businesses that rely on face-to-face transactions are seeing the sharpest declines in employment. Payroll at food services and drinking places declined more than 3 percent from February to March, according to an analysis from the Stephen Fuller Institute at George Mason University's Schar School of Policy and Government.

“Leisure and hospitality firms — hotels and restaurants and entertainment venues — are really the majority of the affected firms,” said Jeanette Chapman, director of the Fuller Institute. “But there are a few other industries, things to do with manufacturing or moving supplies, that seem to have been affected a little bit as well.”

The biggest layoff in Northern Virginia was at OneWeb, a British company that had a U.S. headquarters in McLean. Before the pandemic hit, the company had plans to use low-earth orbiting satellites to provide high-speed internet access across the globe. In late March, the company announced the launch of 34 satellites in Kazakhstan. Now the company has gone bankrupt and alerted the Virginia Employment Commission of 301 layoffs.

"Our current situation is a consequence of the economic impact of the COVID-19 crisis," OneWeb CEO Adrian Steckel wrote in the bankruptcy announcement. "We remain convinced of the social and economic value of our mission to connect everyone everywhere.”

UNIONIZED EMPLOYEES are faring much better than employees in companies where nobody is engaged in collective bargaining on their behalf. For example, the 171 employees who were laid off from the Sheraton Tysons Hotel are represented by Unite Here Local 25, an organization that’s still negotiating a severance package with the hotel’s operator, Crescent Hotels and Resorts. Workers there are getting one week of pay for each year of service up to 10 weeks, plus they’ll be compensated for any vacation time or sick leave they’ve accrued.

“It goes beyond just the wages and benefits and soft landing package. It also speaks to what happens if the business does, in fact, decide to continue,” said John Boardman, the executive secretary-treasurer of Unite Here Local 25. “And that’s simply not true in non-union situations, where workers are at-will employees and have no rights whatsoever to return to their place of employment.”

Another key benefit for unionized members is health insurance. The 121 food service workers at National Airport who were laid off still have health insurance because the union that engages in collective bargaining for them negotiated the contract with OTG DCA Venture II, the operator who runs several establishments in Terminal A. United Here Local 23 bargained for union-controlled health-care plans for all those workers, so now that they’ve been laid off they’ll be able to keep health insurance until the union-controlled funds are depleted.

“Many people lost healthcare coverage on April 1 or are having to pay healthcare premiums in order to retain their coverage while they’re out of work,” said Sarah Jacobs, an organizing director for Unite Here Local 23. “It’s sort of inconceivable to lose healthcare coverage during a pandemic.”