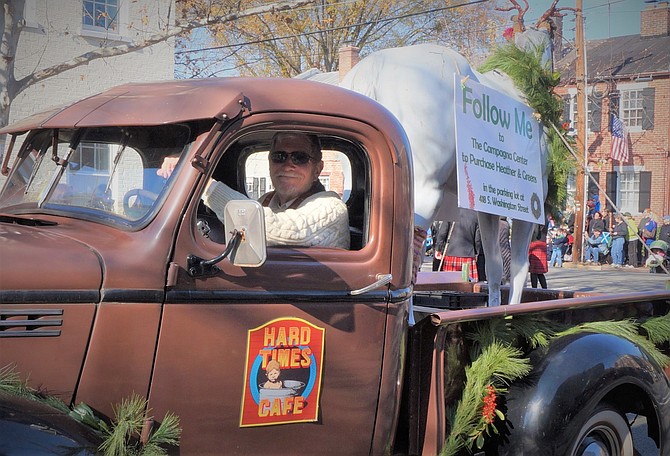 Fred Parker in his 1941 truck and the Hard Times Horse were a highlight of many local parades. Photo by Jeanne Theismann. 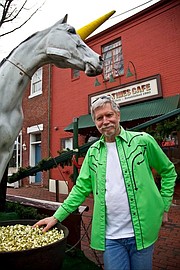 Fred Parker, founder of Hard Times Cafe, died April 26 at the age of 78. 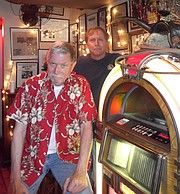 Fred Parker with wife Carol and sons Jonathan and Ned. 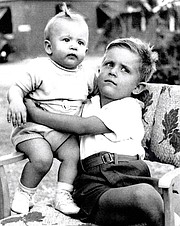 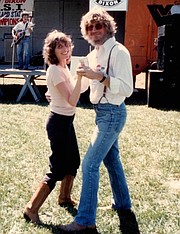 Fred Parker and Carol Christensen dancing at a chili cook-off.

It was a dilapidated building on a decaying stretch of King Street. In 1980, much of Old Town looked the same. But Fred Parker had a dream and this is where he was going to make it happen.

“It was a rough area,” Parker would recall of the location he and his younger brother Jim selected for the Hard Times Cafe chili parlor. “During the early years some customers even had their cars broken into while they were in the restaurant. But thankfully, they kept coming back.”

James Beard and Julia Child were among those to sing the praises of Hard Times chili. Supreme Court justices, members of Congress and sports figures became regular customers.

On April 26, the man with the vision of bringing authentic chili to Old Town died peacefully at his Alexandria home following a battle with cancer. He was 78.

“Fred is my role model,” said Parker’s son Edward, who goes by Ned. “He had almost no connection with his own father and he wanted to make up for that. He was a dedicated father, particularly during my teenage years when I was quite problematic and making bad decisions. He was a rock for me during that time.”

Frederic Goodfellow Parker was born Nov. 12, 1941 in Pensacola, Fla. He was the oldest of two sons born to Frederic Thompson Parker and Lois Goodfellow Parker. He spent his early years in the Bahamas and Hawaii, where his father worked as an Army engineer.

In the early 1950s, the family moved to Northern Virginia. Parker graduated from Wakefield High School in Arlington then went on to study graphic design at the University of Arizona. Following graduation, he returned to Northern Virginia and began working at the National Gallery of Art. It was during this time that he met his future wife, Carol Christensen. The two married in 1984 and together raised two sons.

But a passion for chili had been ignited in Parker and his brother at a young age and in 1980 they left the security of their day jobs – Jim was an accountant – to turn what had been a hobby into a business. The first Hard Times Cafe opened that same year on King Street and still operates today.

“My grandfather learned how to make chili from a chuck wagon cook along the Chisholm Trail at the turn of the 20th century,” Parker said of the family lore. “The recipe got passed down to my aunt Irma, who sparked our love for chili.”

The restaurant was a success and subsequently expanded to include 16 locations from Fredericksburg, Va., to Hagerstown, Md.

“Restaurants typically don’t last very long,” said Ned Parker. “But the success of Hard Times is a testament to the values of Fred and Jim. They could have used cheaper materials or paid cheaper wages but instead took a much different approach. They preferred to invest in people.”

Parker joined the King Street Metro Enterprise Team, known as KISMET, and served on the board of its successor, the Old Town Business and Professional Association. He is a former board member of Friends of the Torpedo Factory and First Night Alexandria.

Over the years, Parker spearheaded chili festivals benefiting the National Kidney Foundation and donated food to numerous events including the Rotary Club of Alexandria’s Taste for Giving and the Carpenter’s Shelter Cook-off. His contributions to the community led to his being named a Living Legend of Alexandria in 2015.

“Rarely was there an Old Town fundraiser that dad wasn’t giving away chili,” Ned Parker said. “Through his actions he taught me about kindness. I’m hearing story after story of how Fred and Jim would step in to help out an employee with rent or other debts. They both felt that taking a chance on people is the most important risk you can take in life. It’s a risk that pays off better than anything else.”

An accomplished musician, Parker performed regularly in a band with his wife and former NGA colleagues and his two sons are also musicians. In recent years, Parker was diagnosed with Parkinson’s disease and in late 2019 it was discovered he had cancer.

Survivors include his wife of 36 years, Carol Christensen; and sons Edward (Ned) Parker and fiance Hillary Clausen of Alexandria; Jonathan Parker and fiancé Molly Hongola of Brooklyn, N.Y.; and Charlie Parker of Taos, New Mexico. Parker will be cremated and his ashes scattered among favorite family vacation spots including Chincoteague Beach, the Adirondack Mountains, and Santa Fe, New Mexico. He was predeceased by his brother Jim in 2014.

No services are planned at this time. A memorial website – www.FredGParker.com – has been created and will include announcements on any future memorial activities. A traditional funeral will follow at a later date.

In lieu of flowers, donations may be made to the Parkinson's Foundation or the Carpenter’s Shelter.

“These last days I realized just how popular a person dad was,” Ned Parker said. “People truly loved him. I remember growing up how easy it was to get ahead socially by putting other people down. But dad managed never to speak bad of anybody. He was that rare breed of cool and kind and taught me that you can do both.”