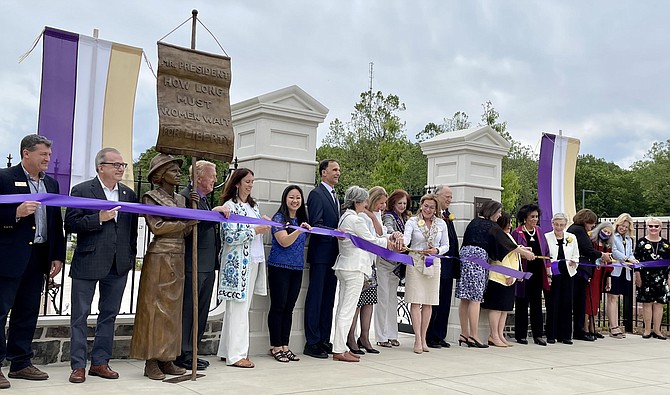 “The suffragists engineered the greatest expansion of democracy on a single day the world had ever seen, and yet … the leaders built no monuments to themselves, and too many of their names have been lost to history.” – Eleanor Clift, columnist and author of Founding Sisters and the Nineteenth Amendment 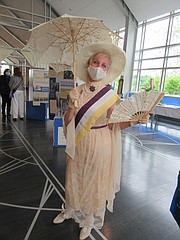 Dr. Thelma Daley with statue of Mary Church Terrell, a suffragist and co-founder of the NAACP. 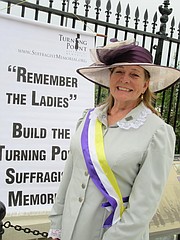 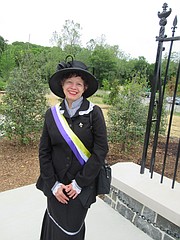 “Herstory” was made on May 16 when around 100 Northern Virginians applauded the ribbon cutting officially opening the Turning Point Suffragist Memorial in Lorton, a project 13 years in the making.

“It’s a story that needed to be told,” said Patricia Wirth, Executive Director of the nonprofit Turning Point Suffragist Memorial Association, “the only suffragist memorial in the country to honor women who fought for the right to vote from 1848 to 1920. Most of the women were unknown.” Today, less than eight percent of the nation’s outdoor statues honor women.

The $2.7 million outdoor, plaza-style memorial commemorates those who mobilized, marched, picketed and lobbied for a U.S. Constitutional amendment granting women the right to vote, a 72-year movement that succeeded in 1920.

Virginia provided $275,000 toward the memorial, Virginia Delegate Kathy Tran told the attendees. “The memorial is a reminder that our rights do not come without struggle and sacrifice. The struggle for voting rights is not a relic of the past. Our work is not done,” she said.

Mount Vernon Supervisor Dan Storck, described the memorial as “an example of persistence” and noted that Fairfax County donated $1 million in cash and in kind.

Why in Lorton? Gruesome Details

In the early 20th century, over 1,000 suffragists, dubbed the “Silent Sentinels,” wordlessly, peacefully picketed President Woodrow Wilson on the White House sidewalk wearing purple, gold and white sashes and carrying banners with messages like “Mr. President, how long must women wait for liberty?” The Suffragist newspaper reported that the demonstration was “the first time in history the President of the United States is being picketed.”

On Nov. 10, 1917, police arrested 27 women picketers for “obstructing traffic” and hauled them off to the Occoquan Workhouse at Lorton. Superintendent Raymond Whittaker and his guards crammed them into cells with prostitutes, thieves and drunks and fed them mostly hard bread and maggot-laden soup. One suffragist, Ada Kendall later wrote about the workhouse: “It was a place of chicanery, sinister horror, brutality and dread.”

The night of Nov. 15, 1917 at the workhouse became known as the “Night of Terror.” Vowing to stop the picketing, Superintendent Raymond Whittaker denied the women food and water and guards manacled Lucy Burns by chaining her wrists over her head to her cell door all night. When asked to pay a $25 fine, Burns replied, “Not a dollar of your fine shall we pay. To pay a fine would be an admission of guilt. We are innocent!”

The “miscreants” demanded to be recognized as political prisoners. When 16 women went on a hunger strike, jailers force fed them an egg mixture through a tube in their nostrils so they would not become symbols and die as martyrs. Burns wrote on a smuggled out note that the force-feeding brought on nausea, violent vomiting and a nosebleed.

On Nov. 23, 1917, officials transferred the women to the Washington, D.C. jail, eventually released them and commuted their sentences.

When asked about the Constitutional amendment, President Wilson dawdled and dodged. The suffragists chided his hypocrisy in fighting for freedom abroad in World War I while denying it at home. Finally, on Jan. 9, 1918, he relented, giving tepid support as a “necessary war measure.” The women’s imprisonment and Wilson’s reluctant endorsement were seen by many as a turning point in the suffrage movement, hence the memorial’s name.

After the amendment became law, no one rushed to build a monument. Historian Edith Mayo calls the suffrage saga as the “best kept secret in American history.” At the Sunday dedication, Turning Point Suffragist Memorial Association co-founder Jane Barker recalled how a small local group started by planning a wall with plaques displaying suffragists’ names, to be called the Turning Point Plaza, but they soon decided that a wall was not enough. She credited many women volunteers and “a few great men who never gave up.”

The Turning Point Suffragist Memorial Association raised over $2.7 million in cash and in-kind donations, in partnership with NOVA Parks, the agency that provided the land. Contributors include the League of Women Voters, Dominion Energy, AARP and Procter & Gamble. Many donors’ names are listed on a wall.

The memorial, designed by Robert Beach of Robert E. Beach Architects, is in the 350-acre Occoquan Regional Park, and managed by NOVA Parks. Executive Director Paul Gilbert sees it as part of NOVA Parks’ efforts to “highlight the lesser-known stories.” He said that the suffragists’ imprisonment “is a dramatic story and the turning point. It’s important for people to understand how our democracy has grown over time and right here in Northern Virginia, the events that led to women’s suffrage.”

Visitors enter the memorial through replica White House gates where the Silent Sentinels staged their pickets. The memorial also has a 24-foot section of the actual White House fence where the 1917 suffragists protested, thanks to negotiations by the Women’s Suffrage Centennial Commission. A commemorative wall lists by state the women who were jailed.

One panel recounts the 1913 grand parade and pageantry on Pennsylvania Avenue when thousands of women, ten bands, 26 floats, six golden chariots and a handful of elected officials marched, led by Inez Milholland dressed in a white Cossack suit and white kid boots astride a large white horse, invoking Joan of Arc.

Another panel recounts that after multiple fits and starts, the U.S. House of Representatives passed the Susan B. Anthony amendment on May 21, 1919, and the Senate, on June 4, 1919, sending it to the states for ratification. The 19th amendment to the U.S. Constitution became law in 1920 when the Tennessee legislature, by a slim margin, approved it, becoming the required 36th state to ratify.

Virginia did not ratify the amendment until 1952.

The memorial also has a meditation garden, a rotunda and an arroyo bridge that represents connecting the two centuries in which the suffrage movement took place.

Advocates envision the Turning Point Suffragist Memorial as part of a Constitution Trail, joining several Virginia historic sites: Mount Vernon, home of American Revolutionary War general, George Washington (and Martha); Gunston Hall, home of the Virginia Declaration of Rights author George Mason (and Sarah); Montpelier, home of James Madison, an author of the Constitution (and Dolley); and several Civil War battlefields where the goal of a “united states” was battled.

In a video played Sunday, House of Representatives Speaker Nancy Pelosi challenged, “We must remember the shoulders we stand on.” Supporters see the memorial as a bright new spotlight on a long-ignored chapter of U.S. history and the determined women for whom, as suffragist Susan B. Anthony said, “Failure is impossible.”