‘To Promote the Arts and Provide Scholarships’ in Fairfax City
Votes

‘To Promote the Arts and Provide Scholarships’ in Fairfax City

Spotlight on the Arts Mayor’s Gala is Aug. 29. 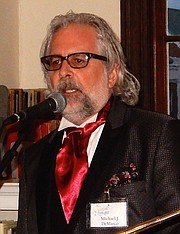 Due to the pandemic, this year’s Spotlight on the Arts Mayor’s Gala will have to be virtual. But Fairfax City’s celebration of the local arts scene will be just as heartfelt and enthusiastic as ever.

“Spotlight on the Arts has a long tradition of being a catalyst for the growing arts, cultural and entertainment hub in the central Fairfax area,” said Michael DeMarco, president of Fairfax Spotlight on the Arts Inc. “Our mission is to promote visual and performing arts events, to support new and emerging artists and arts groups, and to provide arts-related scholarship opportunities to our future artists.”

The virtual gala will be held Saturday, Aug. 29, at 8 p.m., and will celebrate the 50th Anniversary of the City of Fairfax Band Association and the 35th Anniversary of Fairfax Spotlight on the Arts. Both entities are jointly hosting the event, which will be attended by supporters of the arts in the community, as well as elected officials, business leaders and community members.

“We’re thrilled to celebrate these two organizations with the Virtual Mayor's Gala for the Arts,” said event Co-Chair Ellie Schmidt. “Both the City of Fairfax Band Association and the Spotlight on the Arts have had such a positive impact on the Fairfax area by providing cultural and performing arts that connect the community, strengthen the local economy and provide educational opportunities for our youth.”

“Moving to a virtual event meant the ensembles of the City of Fairfax Band Association could not perform live as planned,” said Band Conductor Robert Pouliot. “But it actually gives us the opportunity to showcase all our member ensembles, rather than the smaller groups that were planned because of space constraints.

“We dug into our archives of live concerts and some videos taken during live events, as the starting point, and assembled collages of all our ensembles in action. We think this is a great opportunity to demonstrate the versatility of our organization, from our smallest chamber groups to our full, concert bands.”

Pouliot noted, as well, that the 2019-2020 season was a milestone for the group, as it celebrated the 50th anniversary of the band’s founding. “What started as a small, concert band performing a single summer performance in 1969 quickly developed into one of the area's most versatile, performing-arts organizations, operating seven ensembles of many sizes and styles,” he explained. “The Gala gives us a chance to celebrate how far the organization has grown since those early days.”

Indeed, the City of Fairfax Band Association’s achievements over the last five decades include receiving the John Philip Sousa Foundation’s Sudler Silver Scroll Award; invitations to national, community-band conferences, with performances in New Orleans, Allentown and Virginia Beach; and representing the U.S. on the shores of France with special performances for the D-Day Commemoration Observances.

“Spotlight on the Arts has a long tradition of being a catalyst for the growing arts, cultural and entertainment hub in the central Fairfax area.”

—Michael DeMarco, president of Fairfax Spotlight on the Arts

In 2015, Pouliot received the John Mason Arts Achievement Award from the City of Fairfax Commission on the Arts, plus the Association of Concert Bands Outstanding Conductor Award. And this year, the band was invited to perform for Independence Day activities at the U.S. Embassy to the Holy See (Vatican City). To learn more, see https://www.fairfaxband.org/.

Throughout its history, Spotlight on the Arts has been committed to supporting and encouraging awareness of cultural opportunities in the greater Fairfax community, in cooperation with George Mason University and the City of Fairfax, and to providing scholarships in the arts. And the annual Spotlight on the Arts Festival continues to be one of Virginia’s foremost arts festivals.

Spotlight also raises funds for scholarships that benefit GMU’s College of Visual and Performing Arts students. Four students will be selected for the 2020-21 school year. One will receive $3,000; another, $1,000; and the other two will be awarded $1,500 each.

TO ATTEND the virtual Gala, on Aug. 29, people may go to the event Website. The link will be posted there and on Facebook, plus emailed to those who register for the auction at that Website.

All in all, said event Co-Chair Steve Stombres, “We’re very excited for the upcoming Virtual Mayor’s Gala and are looking forward to celebrating the City Band and Spotlight on the Arts. Just like everything else in these difficult times, it wasn’t what organizers were expecting when we began planning this event, prior to the pandemic. But we believe the virtual format will allow us to reach new audiences in our community who are just discovering how impactful the arts can be in this region.”

For more information, go to https://www.fairfaxva.gov/government/parks-recreation/cultural-arts/fairfax-spotlight-on-the-arts-festival.