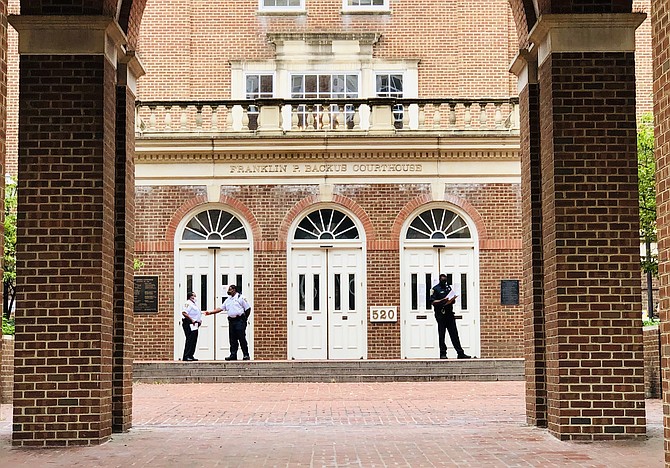 People convicted of drug possession or using a fake ID to get alcohol have almost no way to expunge those convictions from their record in Virginia. Photo by Michael Lee Pope.

Virginia is one of 10 states that offers almost no way for people convicted of misdemeanors to expunge their records, creating roadblocks for people trying to get a job or rent an apartment. Even when a jury finds defendants in Virginia not guilty or when prosecutors dropped charges, allegations remain on records as a stain that can cause problems for years to come. That’s why lawmakers are about to consider a proposal from the Virginia Crime Commission on automatic expungement, which is expected to be released early next week.

“For the relatively low-level, minor offenses I think there ought to be some sort of automatic mechanism where those records are at least sealed,” said Attorney General Mark Herring in an interview. “We should give a clean slate and a second chance to more Virginians who have earned it.”

Earlier this year, lawmakers considered about a dozen proposals on expungement. Some were narrowly tailored to what happens when charges were cleared from a record or when a jury failed to convict. Others were aimed at figuring out a way to expunge charges brought against victims of sex trafficking, a complicated procedure that requires convicted felons to prove they were victims of sex trafficking when the crimes were committed. Ultimately, lawmakers threw in the towel and asked the Crime Commission to study the issue and went home without accomplishing anything on expungement.

“There were a bunch of bills thrown up by lawmakers who had probably been contacted by constituents who tried to get expungements but couldn’t get it, so you had bills that were these tiny little piecemeal things,” said Andrew Elders, policy director for Justice Forward Virginia. “It was too complicated for everyone to put together in a very short session in a way that amounted to meaningful reform.”

FAST FORWARD to the summer, when protesters across the country were shining a spotlight on police brutality. Gov. Ralph Northam called a special session to rewrite the budget and address criminal justice reform; members of the Legislative Black Caucus identified automatic expungement as a their leading criminal-justice reform priority. House Majority Leader Charniele Herring of Alexandria also serves as chairwoman of the Virginia Crime Commission, which is expected to issue recommendations Monday to finish the work that was started earlier this year.

"We were looking at the current structure and adding a section to the currently existing section code, and that’s what made it complicated and difficult,” said Herring. “With automatic expungement, all that needs to happen is someone has served their time and not committed another offense. It’s more just, and it’s more equitable.”

“We should give a clean slate and a second chance to more Virginians who have earned it.”

One issue that might cause some conflict in Richmond is a difference in approaches between the House and Senate. While House members have been pushing for an approach that identifies a limited number of crimes that would qualify for automatic expungement for misdemeanors like petty theft or marijuana possession, some members of the Senate are uncomfortable with creating a system that removes discretion of judges.

“We’ve been fighting hard to build discretion back into our system, whether it’s giving prosecutors the discretion to drop charges when they want to or giving judges and juries the discretion to impose a sentence they feel is appropriate instead of the General Assembly telling them what they can and can’t do,” said Sen. Scott Surovell (D-36). "Automatic expungement is the opposite of that.”

RECOMMENDATIONS FROM the Crime Commission are expected to outline which crimes are automatically expunged and how long a period of time needs to elapse before that happens. Misdemeanors like destruction of property or trespass are likely to be on the list while crimes like domestic violence or stalking are likely to be excluded. As for the amount of time that should elapse before the record is cleared, commissioners are looking at anywhere from three years to eight years.

“Expungements need to be an automatic process,” said Del. Mike Mullin (D-93), chairman of the House subcommittee that will be considering the issue. “People who have served their time, served their debt to society and have been of good behavior for a very long time have got the opportunity to start over in life.”

“If these are crimes of poverty, then to me that makes it clear to me that they should be expunged automatically.”

One issue lawmakers will be wrestling with is whether they want to make any felony charges subject to automatic expungement. Many people in Virginia have felony convictions for drug possession, the result of a decades-long war on drugs that many criminal-justice advocates say has been a failure that has created disproportionate hardships for Black and Hispanic people who get caught up in the criminal-justice system. If the discussion about automatic expungement is limited to misdemeanors, these people would be left out of the conversation and not helped by the reform.

“I don’t think possession of drugs should be a felony. I think it should be a Class One misdemeanor,” said Alexandria Commonwealth’s Attorney Bryan Porter. “If we could amend that down to a misdemeanor, it’s still a crime but it’s a much less serious one. Then that problem wouldn’t exist. If someone was arrested for a misdemeanor, then that would come under automatic expungement.”