House and Senate Democrats disagree on how old convictions should be expunged. 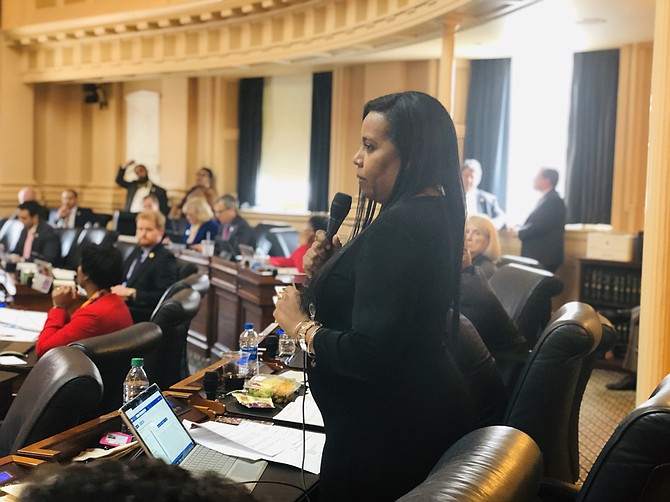 For people haunted by a conviction for felony drug possession or misdemeanor disorderly conduct, a debate now happening in the Virginia General Assembly is one that could have dramatic consequences for finding a place to live or landing a job. Lawmakers are considering legislation that would allow those people to seal their criminal record, expunging old convictions and helping them wipe the slate clean.

But Democrats are bitterly divided over how to accomplish that goal.

House Democrats are pressing for an automatic model for sealing the record on many crimes, allowing people to wipe the slate clean without needing to hire a lawyer or missing a day of work. Senate Democrats are rejecting that approach, holding out for a petition-based process where judges would review individual cases to determine whether they deserve to have convictions or charges sealed. Neither side appears to be willing to back down as the legislation heads toward a closed-door conference committee, where lawmakers will either cut a deal or end the session without taking action.

"It's time to act during this session to have the robust debate about how to best conduct the process of expunging people's records," said Gov. Ralph Northam in his State of the Commonwealth address. "This will make our system more just and equal — and it needs action this session."

Although the governor told lawmakers he wants them to find a resolution before they end the session, he pointedly declined to take a position. The lack of leadership from the governor has intensified the struggle between Senate Democrats and House Democrats as the General Assembly session reaches its halfway mark this week. At this point, the most likely scenario is that each side would insist on its version, sending the legislation into a conference committee where lawmakers might end up adopting some kind of hybrid approach, expunging some crimes automatically while requiring a petition to seal others.

"Keeping people branded with a scarlet letter for misdemeanor offenses is disgraceful."

“For the relatively low-level, minor offenses I think there ought to be some sort of automatic mechanism where those records are at least sealed,” said Attorney General Mark Herring . “We should give a clean slate and a second chance to more Virginians who have earned it.”

HOUSE DEMOCRATIC LEADER Charniele Herring of Alexandria says many misdemeanors and even some felonies should be automatically expunged from the record after eight years. The bill that she introduced in the House has automatic expungement sealing the record for many low-level misdemeanors like petty larceny and trespassing, although it does not apply to sex crimes or violent crimes. Her bill also includes automatic expungement for felony drug possession. If expungement for those crimes requires a petition, she says, only a privileged few would benefit while most people would suffer.

"Who benefits from petitions for misdemeanors? Attorneys," said Herring, who is the chairwoman of the House Courts of Justice. "Keeping people branded with a scarlet letter for misdemeanor offenses is disgraceful."

Opponents of automatic expungement say it's a mistake to automate any court proceeding, because it excludes the role of judges to make individual determinations about defendants and their circumstances. Lawmakers are considering a separate bill that would eliminate many mandatory minimums, and advocates for petition-based expungement compare automatic expungement to the problems associated with mandatory minimums. That’s an approach supporters of the House bill reject.

"When expungement is not free or automatic, very few people avail themselves of it," said Ashna Khanna, legislative director at the ACLU of Virginia. "We need a system that will not create more inequities when it comes to race and socioeconomic status."

SENATE DEMOCRATS are taking a much more conservative approach. Sen. Scott Surovell (D-36) has a bill that would allow automatic expungement for some minor offenses, like speeding or shopping cart theft. Felony drug possession and jailable misdemeanor like larceny or trespassing would require a judge to review an individual's case and get a sense of who the defendants are and what happened in their lives that resulted in the criminal record. That way judges can identify significant drug problems or mental health problems.

"What somebody is convicted of is often a legal fiction to achieve a compromise in a criminal proceeding," said Surovell. "And from my perspective the circumstances of the crime that led to the compromise are partly what need to be considered before a charge is expunged."

"What somebody is convicted of is often a legal fiction to achieve a compromise in a criminal proceeding."

Although Herring's bill has automatic expungement for a narrow set of offenses, Surovell's bill has a petition-based process for a much larger list of crimes. Currently, Virginia law offers no way for people to seal old convictions, and the Senate bill would create a new process for expunging the record for hundreds of crimes. Surovell's bill also includes a provision to provide legal services to some people who can't afford lawyers and penalties for private companies that sell expunged criminal records online, a grift that's often used to extract money out of people who are trying to clear their names on the internet.

"The more expungement available the better," Andrew Elders, policy director for Justice Forward Virginia. "I keep wanting to take the best parts of these bills and smash them together until we get the most expansive reform possible."

THE CONTOURS OF A FINAL bill might end up taking bits and pieces from two approaches, and advocates have a wide range of opinions about what should happen. Alexandria Commonwealth's Attorney Bryan Porter says he supports automatic expungement for any charges that have been dismissed or where the defendant has been found not guilty. He also supports an automatic process for sealing all misdemeanor convictions, including convictions for larceny or trespassing. But, he says, he would like to see a petition-based process for felony drug convictions.

"There currently is no process by which you could ever have those convictions sealed, and I'm supportive of allowing people a process by which they can have those convictions sealed," said Porter, who is part of a group known as the Progressive Prosecutors for Justice. "But I do think it's reasonable in those circumstances where someone has actually been convicted of a criminal offense that there be a petition-based system."

The ongoing impasse between the House and Senate on this issue has been going on for more than a year. House and Senate Democrats were unable to come to a resolution on their differences last March, and the session concluded without a bill. Then the Crime Commission released a report supporting the automatic process, and people were hopeful that a special session on criminal justice reform might have been an opportunity for compromise. But once again the House and Senate were not able to reach an agreement and the special session ended without a deal.

Now lawmakers are back at it again for a third time, and each side seems to be digging in its heels and refusing to back down.