Good teaching is colorful and timeless. 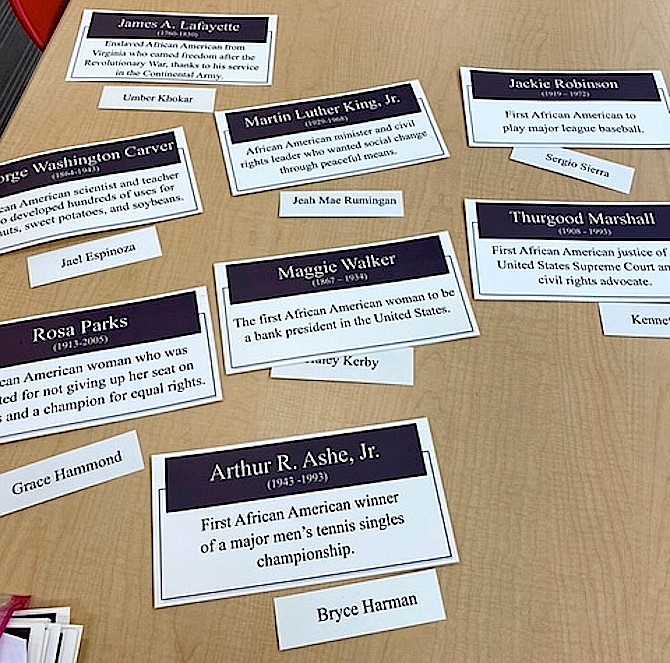 The students’ placards became separated from the paintings when the building was renovated, but a selection of them reveals interesting choices of famous people. The portrait painter teaching them also stressed that even white people aren’t really just white, but have many skin tones; the portraits show that the students put his teaching point to work. Photo contributed

A group of volunteers found themselves in the Abingdon Elementary School library on the Sunday before Martin Luther King Day. Looking down on them were portraits: one of them was clearly Martin Luther King himself. But who were the others? Some of them looked familiar…

The portraits, it turned out, have been there for a while. They were a project spearheaded by Erin Sonn, a former Arlington Public Schools teacher,” said Lauren Muscatella, the current art teacher.

In 2009, Sonn got a mini-grant through the Department of Instruction at APS, which was supposed to engage students in a greater awareness of famous people. Sonn collaborated with a gifted artist who was on the staff, Sergio Sierra, and they began a project called “Famous Faces”. “It was at that point,” Sonn said, “that I realized there was a disconnect between the people in history the children were supposed to know – like President Washington and President Lincoln – and the ones that, while lesser known nationally, had made a huge impact on civil rights or had made a major impact on Virginia history. As a teacher, Sonn wanted the students to see history as having local ties, and famous people as relevant to them, so she asked the students to pick different kinds of people, and to truly understand who they were and what impact they had on the lives of Americans or Virginians. Sierra was a gifted portraitist and helped the students learn how to paint a portrait.

As a result, the project included people like Doug Wilder, Arthur Ashe, the first black female head of a bank, Maggie Walker, as well as early explorers, presidents, and famous civil rights leaders like Martin Luther King, Jr. It included people like James Lafayette, a little known hero of the Revolutionary War, an formerly enslaved man born in Virginia who served under the Marquis de Lafayette and took his name to honor him. The result was a collection of portraits that remains – ten years later – a centerpiece of Abingdon Elementary School library and a reminder to all students that famous people of all shades are part of our local history.

Sonn said she left the Arlington school system two years ago. “After teaching many years, my last stint was as a testing coordinator – and it was then when I realized how inane the testing standards were and how administrators were so fixated on scores, and how the school system would look nationally if the students performed badly, that they were stressing out teachers about meeting benchmarks, risking having them lose sight of the reason they were there: to focus on the needs of the individual child and learning, versus testing.

Sonn now specializes in yoga for educators, and teaches yoga and mindfulness to APS teachers, as well as running workshops for staff on stress reduction.