Over in Kingstowne, the former Toys R Us site has been divided into two parts, and one side is being renovated to house another business. Photo by Mike Salmon. 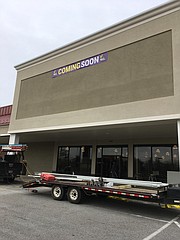 Planet Fitness is a “Judgement-Free Zone,” they say.

Although there has been a rash of big box stores moving out of the Springfield-Kingstowne area over the last few years, there are signs that things are straightening out retail-wise. Here, where the Giant Foods was previously, the space was divided in half and a new Planet Fitness is moving in on one side. It will be opening later in February. The new workout facility will offer classes in weight lifting and cardio.

About two miles up the street, in a space that was once occupied by Toys R Us, construction crews have divided that space in half and one half is being reconstructed for a new food store.