‘An Individual who Exemplifies the Very Best’ in Fairfax
Votes

‘An Individual who Exemplifies the Very Best’ in Fairfax 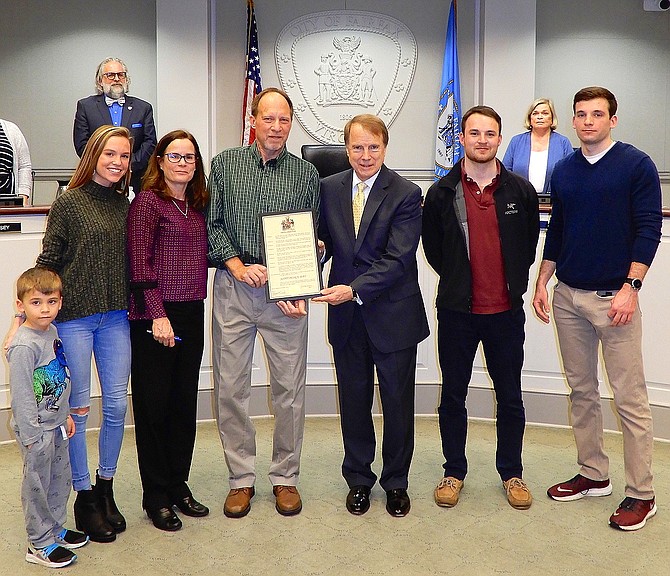 The audience was packed during last week’s Fairfax City Council meeting. But most people weren’t there because of a particular piece of City business; instead, they came to honor and support Scott Peirce for his many years of service to youth baseball in Fairfax.

At the outset of the Feb. 11 meeting, Mayor David Meyer had Peirce and his family step to the podium for a special presentation. Then, said Meyer, “Tonight we’re here to affirm our national pastime, baseball – the finest sport ever invented by humanity.”

He said the reason baseball is so ingrained in American culture is because it starts on the corner fields in people’s neighborhoods – “when children get together and learn the basics of sportsmanship and cooperation. Baseball requires a lot of teamwork and players thinking about what they need to do and how they can back each other up.”

And through the generations, said Meyer, “There are always adults who have stepped forward to take young players under their tutelage and teach them the basics – not just the mechanics of fielding and hitting – but, also, how to cooperate and work as a team.” He then told the attendees there who work with young baseball players that, years from now, those players will still remember them with fondness for the qualities of leadership and fairness their coaches taught them when they were young.

“Today we’re here to recognize an individual who exemplifies the very best in what I was just talking about – Scott Peirce,” said Meyer. “He has been Mr. Baseball, here in the City of Fairfax, for many, many years. And, for that, we are very, very thankful, and we appreciate the support of his family, as well.”

Therefore, the proclamation stated, “In recognition of his many exceptional accomplishments and his vision, leadership, commitment and dedication to the Little League community, the School Board authorized the dedication and naming of baseball field 3 at Providence Elementary in honor of Scott Peirce, to be henceforth referred to as Scott Peirce Field, as a permanent recognition of [his] contributions.”

In addition, Meyer and the City Council proclaimed this April 18, Fairfax Little League opening day, as Scott Peirce Day in the City, and the entire audience stood and gave Peirce a standing ovation. “This past fall, we all experienced a remarkable victory of our hometown team [Washington Nationals] winning the World Series,” said Meyer. “But in some ways, that just pales in comparison to what we’re recognizing this evening.” Then, directly addressing Peirce, Meyer told him, “You are a world champion, as well.”

Again, Peirce received thunderous applause; and in response, he said, “Thank you all very much; I’m amazed at this turnout – you guys are wonderful.” He also thanked the mayor, Council, School Board and Department of Parks and Recreation.

“It’s been a great 15 years working with you guys,” he said. “This really is quite an honor; and it’s not just for me – it’s for all of the Little League. We all work together; nothing gets done alone on a Little League Board.”

“As you know, I’m struggling to get some of the words out,” continued Peirce. “I’ve been diagnosed with ALS – Lou Gehrig’s Disease. Currently, there’s no cure for ALS, [but] we’re very hopeful; there’s a lot of great research going on. Any cure for ALS will be a cure also for other neurological diseases – MS, Parkinson’s, Alzheimer’s – so we’re all hopeful there’s a cure real soon. It would be nice.

“It’s taken away some of my speech and reduced some of the strength in my arms and shoulders, so I can’t do the fields and grounds stuff I’ve been doing for 15 years for the Little League and the City of Fairfax. A lot of good folks on the Board are taking my spot, though, and doing those things.”

MOST IMPORTANTLY, said Peirce, “What ALS cannot take away from me is my love for life, my love for my family, my friends, for baseball and sports, in general, and for volunteering. I’ve always wanted to volunteer and give my time. The Board has literally been my second family, at times, and I’ve made some lifelong friends.”

He also expressed appreciation for his family’s support, throughout the years, plus his Mantua neighborhood. “One of the greatest things they did for me, after my diagnosis, was getting me two tickets for the World Series,” he said. “It was game four, at home, and my son Brian and I went together to see the Nats play. The score wasn’t that great, but the night was magical – what a gift.”

“Thank you all for being here,” continued Peirce. “I hope I’ve got many more years of service, but none of us know that answer.”

Speaking last, Meyer told him, “Baseball is really a metaphor for life. You coached and taught people a lot about the game, but you’ve taught us more about living. And I know that, every day you get up and face a new day – in the spirit of your coaching – you’re saying, ‘Play Ball!’”

Afterward, Peirce said he initially volunteered because of a need for coaches, then a love for the game and youth sports, and then because “I realized it was a great way to give back to the community. We all should volunteer in some form.”

As for the accolades he received, he said, “I felt honored that the City would do that for me and Fairfax Little League. It means the world to me to be recognized for 20 years of hard work, and I hope others see what I, and the league, have been able to accomplish and follow our lead for many more years.”