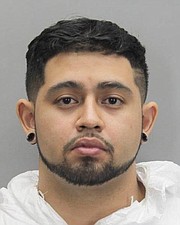 A man is in custody following a domestic-related homicide that occurred early Saturday morning, Feb. 22, in the Herndon area of Fairfax County. Officers responded to a home in the 12800 block of Lady Fairfax Circle shortly after 3 a.m. for the report of a disturbance. Officers found 53-year-old Blanca Turcios, of Herndon, with multiple gunshot wounds to her upper body. She was pronounced dead on-scene by rescue personnel. A preliminary investigation revealed that her son, Eric Turcios, 28, of Herndon, was responsible for the shooting. He surrendered to Prince William County Police a short time later. A firearm, believed to be involved, was recovered at the time of his arrest.

Turcios was taken to the Adult Detention Center and charged with murder and use of a firearm in the commission of a felony. He is being held without bond.

Detectives are continuing their investigation into the events leading up to the shooting. The Office of the Chief Medical Examiner will conduct an autopsy to confirm the cause and manner of death.

This is the first homicide year-to-date in Fairfax County.