Last stretch may be express lanes next with “495 NEXT.” 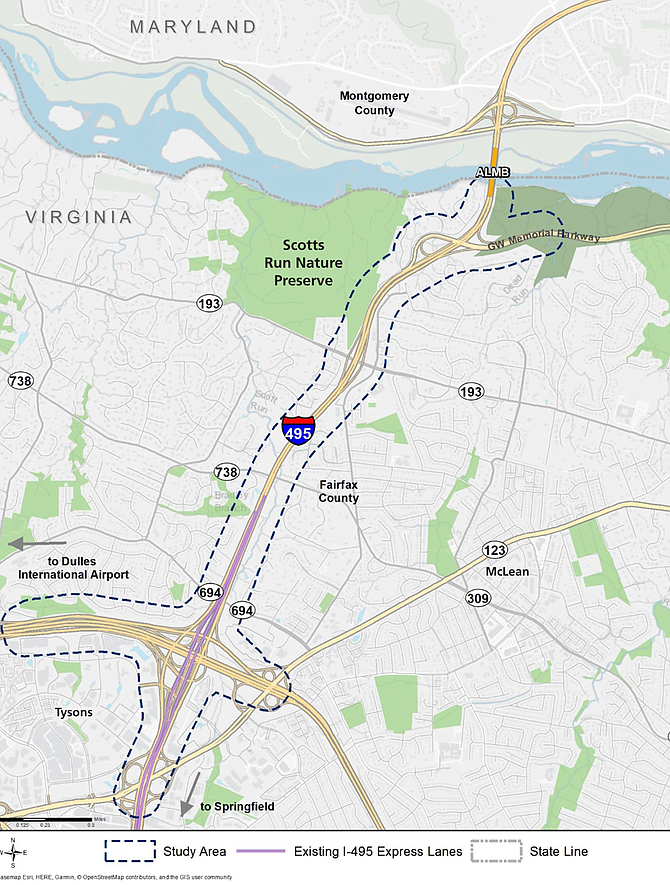 Map of 495 and the bridge to Maryland

Just when it seemed like the interstate network in Northern Virginia was completely outfitted with the toll lane options, transportation officials have etched out another project to stretch the 495 Express Lanes to the American Legion Memorial Bridge on the northern side of the Capital Beltway.

The proposed project, they are calling “495 NEXT,” includes extending the 495 Express Lanes by approximately three miles from the I-495 and Dulles Toll Road interchange to the George Washington Memorial Parkway in the vicinity of the American Legion Bridge. It is a joint project from the Virginia Department of Transportation and the Department of Rail and Public Transportation.

In that corridor, plans include replacing existing bridges, adding bike and pedestrian trails, replacing existing noise walls and construct new walls where needed and installing stormwater management facilities. By doing this, it will reduce congestion, VDOT says, provide additional travel choices and improve reliability. Currently, a motorist on the existing 495 Express Lanes heading northbound hits the end of the express lanes just north of the Dulles Toll Road, and has to merge back into traffic, and it can be problematic. This extension is designed to eliminate that.

INTERCHANGES at Old Dominion Drive, Georgetown Pike, Live Oak Drive and the George Washington Memorial Parkway will be rebuilt as part of it. Maryland is looking into implementing express lanes, and these are proposed to include the American Legion Bridge which could link to the 495 Express Lanes with this extension. In November 2019, Governor Ralph Northam (D-VA) and Governor Larry Hogan (R-MD) signed the Capital Beltway Accord to create a new, unified Capital Beltway, replace the aging American Legion Bridge and relieve congestion at one of the country’s worst traffic chokepoints, according to the VDOT website.

In the road building process, the plans are presented to the public and meetings are held to gather feedback. One such meeting was recently held on Nov. 18, via a VDOT live feed, and it was attended by VDOT engineers, elected officials and residents of the McLean area. VDOT laid out the data from the traffic studies to support the need for the lane extension, and the sound wall improvements to accompany it. Supervisor John Foust (D-Dranesville) wondered why there weren’t more sound walls at the George Washington Parkway, and was told the National Park Service was against it. “Just because they don’t want it doesn’t mean we shouldn’t build it,” Foust said.

Another element they looked at was the possibility of a transit option to Tysons Corner, with the Fairfax County Department of Transportation advocating for that option. “The county is strongly supporting a transit option,” said director Tom Biesiadny.

THE OPPOSITION spoke out too. One commenter claimed the website was not up to date, had the wrong maps, and the studies were “just empty words,” she claimed. Another person, “Debbie Butler,” wanted to know what Maryland’s plans were to connect the lanes.

At the end of the meeting, the VDOT project manager Michelle Holland promised to follow up on all items that were discussed during the online meeting.

Right now the timeframe for the project is loosely established, with the construction starting in 2021 and the project being completed in 2024. For more information, go to http://495northernextension.org