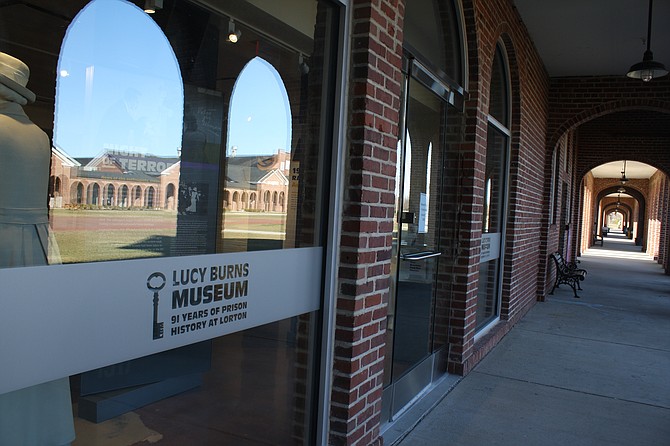 The new Lucy Burns museum at the Workhouse opens on Saturday, Jan. 25. Photo by Mike Salmon.

A majority of the 72 Suffragists at the Occoquan Workhouse in 1917 were officially jailed for “obstructing sidewalks,” read the historic log book of 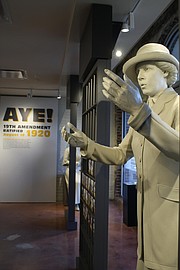 prisoners at the new Lucy Burns Museum that is opening at the Workhouse Arts Center on Saturday, Jan. 25. This minor offense was enforced though, and it led to a turning point in the Women’s suffrage movement to secure voting rights for all women in the United States.

Lucy Burns was just one of the prisoners in Lorton, but “she was really the ringleader here,” said Ava Spece, the president and CEO of the Workhouse.

In the front room, there is an oversized statue of Burns, and Spece said it was intentionally made that way because “we want these sculptures to depict them as ‘larger than life’,” Spece said.

The 10,000 square feet museum will feature 4,000-plus square feet of exhibit space dedicated to the 91 years of history at the District of Columbia’s Lorton Correctional Complex in addition to the suffrage story.

ON THE PRISON SIDE, there are displays of inmate artwork, weapons and “shanks,” the inmates made, photos of prison life, and a full-sized crucifix the inmates made out of dental plaster. The “face is patterned of an inmate that was on death row,” said Allen Mackie, a docent who assisted in creating the museum. The inmates practiced religion and art as a venue of self-expression – this was the one thing they could do while housed in such extreme surroundings. There were murals, drawings, a match-stick house and music that was played by the inmates with instruments.

On the suffragist side, there is a voting display with cards that encourages all the attendees to vote in local elections, and they have directions on how to register as well.

“It behooves us to follow their lead,” said Laura McKie of the suffragists. McKie is a volunteer director who is also a docent. 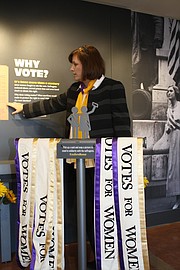 Ava Spece is the president and CEO at the Workhouse Arts Center.

There is a photo op area where museum visitors can put on a sash like the sashes worn by the suffragists, and take a selfie in front of an old picture. There’s also a list of the countries in the world and the date that women got the right to vote. The first country to allow women to vote was New Zealand in 1893, and for the United States, it was 1920. Saudi Arabia was 2015 and the only country that still doesn’t allow women to vote is the Republic of Sudan, according to the list.

When the Workhouse opened a few years ago, there was a smaller museum in another one of the buildings but any relics and exhibits from that museum were incorporated into the new museum on the other side of the main yard. “We really upgraded and used top of the line exhibitors,” said Spece.

THE WORKHOUSE is one of the only places that highlights and provides history education related to its former identity as a prison which housed suffragists and civil rights protesters, launched the musical and broadcast careers of Chuck Brown and Petey Greene, and presented prison concerts with Frank Sinatra, Ella Fitzgerald, and Duke Ellington to name a few.

Visiting the two sides of the museum is free, but there is another part which goes down a former cell block hall, showing the living conditions and the force-feeding procedure that was used on some of the suffragists. To visit that part of the museum, they are asking a $5 donation.