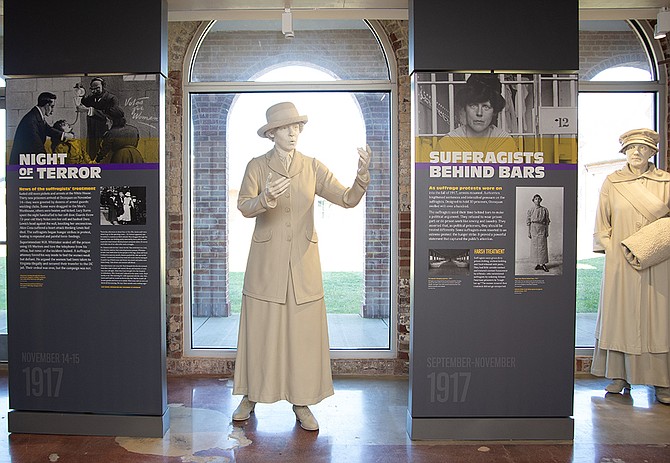 The Lucy Burns Museum will commemorate 91 years of prison history on the site — the Workhouse Arts Center funded, designed, and renovated a new museum, restoring a decrepit prison building vacated in 2001. Photo contributed

With the upcoming Centennial of the Ratification of the 19th Amendment guaranteeing women the right to vote in the United States, the Workhouse Arts Center is holding special Thursday evening Drive-In movies, a Girl Scout Gold Award Project virtual event and a suffrage-related art exhibit, all planned for the month of August.

To commemorate the 100th anniversary of the ratification of the 19th amendment in 2020 the museum presents the story of the imprisonment of the 72 Suffragists at the Occoquan Workhouse in 1917, and an event on these grounds that marked a turning point in the Women’s suffrage movement. The Lucy Burns Museum will honor 91 years of prison history on the site. The Workhouse Arts Center funded, designed, and renovated a new museum, restoring a decrepit prison building vacated in 2001. Peeling paint and rusting cell bars gave way to a space to tell the story of the women imprisoned at the Workhouse a century ago for demanding the right to vote. The sacrifices of these heroic suffragists are honored in the museum.

THURSDAY EVENING DRIVE-IN MOVIES: Bold Women in History Film Series will be held every Thursday evening in August. This partnership between the Workhouse and the Women’s Suffrage Centennial Commission is just one of dozens of programs and virtual events throughout the month.

Anna Layman, Executive Director of the Women’s Suffrage Centennial Commission said, “This year during the 100th Anniversary of the Amendment, we remember these courageous suffragists who never gave up the fight for equality.”

“We are honored that the Women’s Suffrage Centennial Commission approached us to feature movies about powerful and bold women in history at our Drive-In theater,” said Workhouse Board Member Lura Bovee.

Movies begin on Thursday, Aug. 13 and include Harriet, Moana, Suffragette and A League of Their Own. Tickets and more information here: https://www.workhousearts.org/drive-in-movies/.

The event will take place on Aug. 18, 2020, the actual centennial of the ratification of the 19th Amendment, and will include an introduction to Lucy Burns, a time travel puppet show, an interview with Laura McKie, Lucy Burns Museum director, and a game about women’s firsts. There will also be fun activities and prizes.

"I selected this project because I feel it’s important to learn about injustices and understand our history, and many kids in my area don’t know that a significant historic event happened right near us. Many of us take our rights for granted, so it's important to see what efforts and struggles these women went through,” said Emma Skog, creator of the project.

Treasure Hunt booklets created by Emma will be at the Lucy Burns Museum after Aug. 18.

To register for the event, please visit https://www.workhousearts.org/lucyburnsmuseum/.

WORKHOUSE ARCHES GALLERY and award-winning artist Julia Dzikiewicz is displaying her Suffrage related mixed media art in the Workhouse Muse Gallery in Building W-16. When Julia realized that she was creating art in the same place that suffragists engaged in protest that swayed national opinion and eventually won women the right to vote, she began a series of large and small paintings honoring the suffragists.

“The power of art is only partially held in what viewers see on the canvas. The true power is in changing how viewers see the rest of their lives. In my encaustic paintings, layering wax like the accumulation of history, I seek to remind women and girls of their potential to change the world,” said artist Julia Dzikiewicz.

The Muse Gallery is open Friday through Sunday, noon to 5 p.m. and the Lucy Burns Museum is open Saturdays, Noon to 5 p.m.