Workhouse Prison Museum holds bell-ringing ceremony, shows video in honor of 16 suffragists who were imprisoned there. 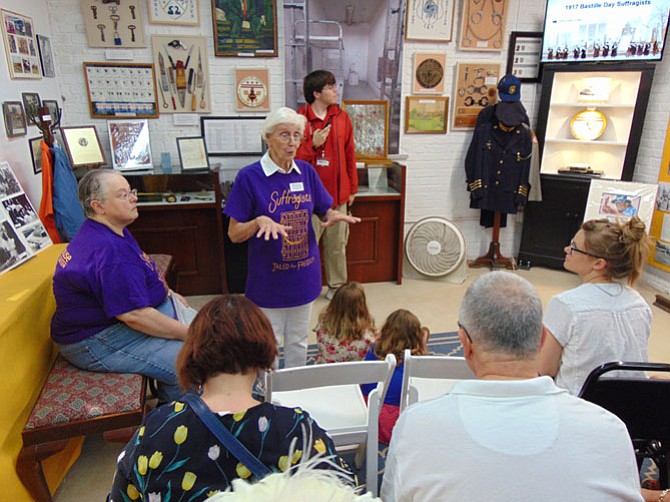 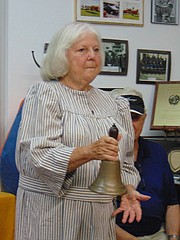 Irma Clifton, who was dressed as a prisoner in a uniform made out of bed ticking, rings a bell in honor or the 16 women suffragists who were sent to Lorton prison.

commemorated the 1917 Bastille Day suffragists movement by ringing a bell and reciting the names of the 16 women protestors who were arrested and sent to the prison.

As the names were called out of the suffragists – Louise Mayo, Elizabeth Rogers, Eunice Brannon, Eleanor Calnan, Mary Ingham, and others, ages 22 to 52 – a bell was rung and passed through the crowd at the museum.

Laura McKie, director of Workhouse Prison Museum, said the year 2017 is important because it marks 100 years ago that women were imprisoned for their protests in front of the Woodrow Wilson White House for the right to vote.

"We chose tonight because July 17 was the date the first women came to the Workhouse and over the next nine months, 72 women were imprisoned here," she said, most from the National Woman's Party for picketing the White House demanding women's voting rights. 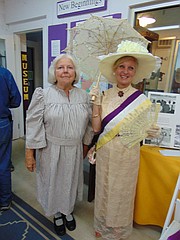 alongside thieves, prostitutes and drunks. They were all sentenced for six months but some of them served for a shorter time. All of them were treated badly; some were on hunger strikes and were force fed, she said. The Lorton Correctional facilities operated a total of 91 years from 1910 to 2001. The Women's Division of the Workhouse, also known as the Occoquan Workhouse, was opened in 1912.

McKie said two women named Alice Paul and Lucy Burns worked with the National Women's Party leading the second wave of suffragist activists for women's right to vote. "Alice Paul was the master mind, the thinker; and Lucy Burns who was the one who led the group to the White House, was among the first ones to be arrested," she said. "She was at the forefront of the activity, something of a fire brand."

TO HONOR HER, the new Lorton Prison Museum will be named the Lucy Burns Museum at Lorton, as she was imprisoned there three different times. It is scheduled to open at Workhouse Arts Center Building #2 in the fall.

A crowd of about 20 people watched a video outlining the work of the women who were arrested for picketing the White House who became a distraction to World War I efforts. For their crime of obstructing sidewalk traffic, they were sent to Lorton Prison.

After a trial that ended after two days, the women were taken to the District Jail and then sentenced to 60 days in the Occoquan Work House in Lorton in default of a $25 fine.

During their days at the prison, they did laundry, cleaned toilets, and did sewing. The food left them nauseated and hungry, and they worried about the unsanitary conditions. They slept in open prison areas and the wardens made things unpleasant for them.

Irma Clifton, who started the museum, dressed as a woman prisoner and explained, "They stripped them naked and these were high-society ladies. Then they had to wear these clothes which were horribly uncomfortable," she said. "I'm dressed like this for people to be reminded how degrading it was for women to come here and be subjected to wearing these filthy, raggedy clothes and sleep in beds that have not been made up from the previous occupant."

President Wilson said he was shocked at the 60-day sentence. When news of their plight leaked out in the press, a national protest had been strong enough to force a release of the suffragists after three days in prison.

Show producer and moderator Kenena Spalding added, "This is our centennial here. In 2020, the nation will celebrate when women got the right to vote. This was to tell the story of them coming to Occoquan in 1917. Eventually the tide of public opinion turned towards the suffragists."

Dressed as an historic re-enactor, Lynne Garvey Hodge played the role of a suffragist named Mrs. Robert Walker, or Mimi Himes, one of the 16 women arrested on Bastille Day. She said, "I absolutely believe this movement was essential to create equality in the U.S. The energy and focus on justice and equality is as needed today as it was in 1917. We just need to not forget."

People might be surprised that Lorton Prison has a roster of famous male prisoners, including G. Gordon Liddy, Benjamin Spock, Norman Mailer, and Noam Chomsky. And through the years, entertainers like Frank Sinatra, Ella Fitzgerald and Duke Ellington performed on the site.