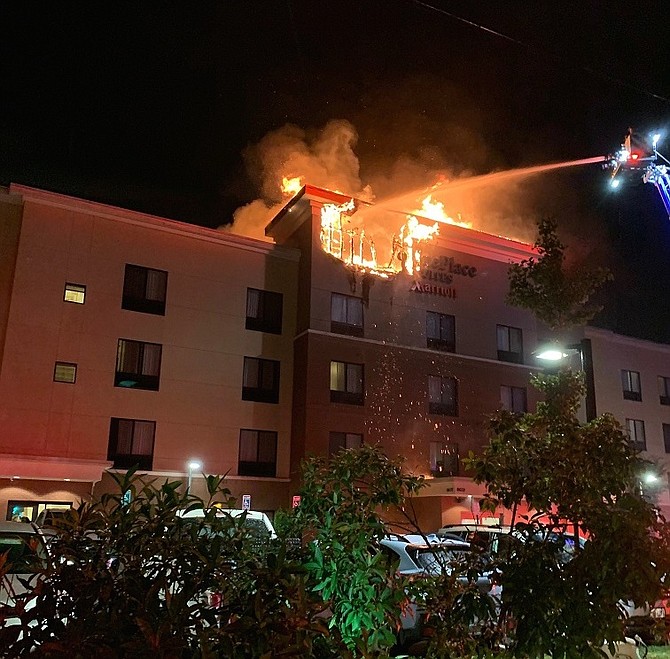 More than 100 hotel guests were in the Woodlawn Court building in Mount Vernon on Tuesday around 1 a.m., but one guest who was outside alerted management to fire on the roof. Smoke detectors did not sound because of the fire location.

On Tuesday, July 7, at approximately 1:13 a.m., units from Fairfax County Fire and Rescue and Fort Belvoir Fire and Emergency Services were dispatched for a reported hotel fire in the 8600 block of Woodlawn Court in the Mount Vernon area of Fairfax County. Units arrived on scene to find a four-story hotel with fire evident from the roof. A second alarm was requested. Crews worked simultaneously to evacuate the hotel and extinguish the fire. The fire was contained to the roof. There were no reported firefighter or civilian injuries.

The hotel was occupied with approximately 108 occupants at the time of the fire. One occupant was outside when he noticed fire on the roof. He notified the manager on duty, who then called 9-1-1. Smoke alarms were present but did not sound due to the location of the fire.

Fire Investigators determined that the fire was natural in nature, caused by a lightning strike, and started on the parapet wall on the roof.

108 occupants were displaced because of the fire. Hotel management was assisting all occupants with alternate accommodations. Damages as a result of the fire were approximately $100,000.