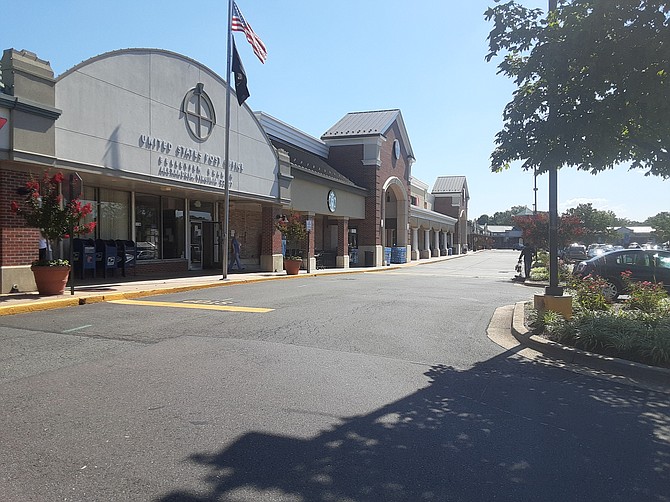 Residents have a few weeks to look at and comment on the new plan before it goes before county officials in September. Photo by Mike Salmon. 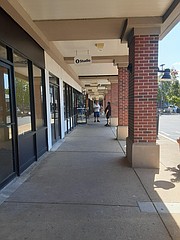 The plan for the Belle View Shopping Center has an extended date.

officials deem the mixed-use plan that was submitted is more suitable for a commercial area along Richmond Highway.

On the Site Specific Amendment Process paper, the reason for the change was cited as the following: “The proposed intensity would be appropriate in development centers, such as the Richmond Highway Corridor Area, that are planned for more intense development and provide high frequency transit service that enable residents to rely less upon single occupancy vehicle travel,” it stated. With its proximity to the Potomac River, there are flooding concerns, and the proposed mixed use development is not consistent with the surrounding single family homes in that area. “The subject area is surrounded by single-family detached homes to the west and north, low-rise multifamily uses to the east, and commercial and multifamily residential uses to the south,” the report stated.

The shopping center is located within the MV4-Wellington Community Planning Sector, which is designated on the Concept for Future Development as a Suburban Neighborhood. Suburban Neighborhoods contain a broad mix of residential densities, are planned for little to no change in land use, and recommend that infill development be of compatible use, type, and intensity with the surrounding areas, the staff report stated. Wire Gill LLP proposed to build a mixed-use facility on the 16-acre parcel consisting of retail, office, and midrise multifamily residential uses with a maximum building height of 5 stories, it said in the report. This type of development seems to be inline with the Embark Richmond Highway plan that is being developed by county planners over the last few years.

On Tuesday, July 28, the Mount Vernon Task Force remotely met via phone and video chat, to discuss the matter with the property owner Wire Gill LLP and Supervisor Dan Storck, although Storck was delayed at the Board of Supervisors meeting and was not actually on the call. Graham Owen from Fairfax County ran the meeting.

The Belle View Shopping Center was brought up early on in the call and was discussed for some time, before David Gill from Wire Gill LLP spoke, saying the face of retail was changing, including the equation of retail vs. residential mix.

Gill requested that the decision on Belle View be delayed until Sept. 15, which is the next planning meeting. Gill cited recent events at the center from the fire months ago, and the pandemic which has impacted the businesses and surrounding residents. Under this delay on a decision, Wire Gill LLP will have to put up their new plan on the website by Aug. 14 so everyone can see it before the new decision is made in mid-September.

“Retail is changing considerably,” Gill said, “this shopping center will face a challenge in the next 20 years,” he said.

When the task force brought up the concerns of traffic, floods, building heights and density with the new project, Gill acknowledged it. “They are valid concerns,” he said.

“This does not fit in with a suburban neighborhood at all,” added one task force member.

The task force put the new date up for a vote and it was decided, nine yea’s and four nea’s that the Belle View decision will be moved to Sept. 15.

Although the Mount Vernon Gazette requested the names, Storck’s office declined to provide names of those on the task force.

“Task force members also may act as a liaison to their representative organizations or communities — relaying information, soliciting feedback, and advocating on behalf of interested community members and key stakeholders, prior to the final vote of the task force.”

The task force is considered a public body under the Virginia Freedom of Information Act.

Voices From the Neighborhood

Nearby residents shopping at the center were mixed on the initial proposal which came out last winter. Bud Wright was shopping at the center with his wife Kate who said “we’re here all the time.” Both had heard of the proposals, and Bud Wright thought the stores were a little dated. “I hope they still do something to refurbish the stores,” he said.

On the other hand, Edward Altemos was looking at the transportation problems that might come with a new center. He was glad to hear they were taking another look. “I didn’t want to see it built, the infrastructure couldn’t support it,” he said.