‘Kids Outside Will Get Full Force of the Sound’ in Westfields 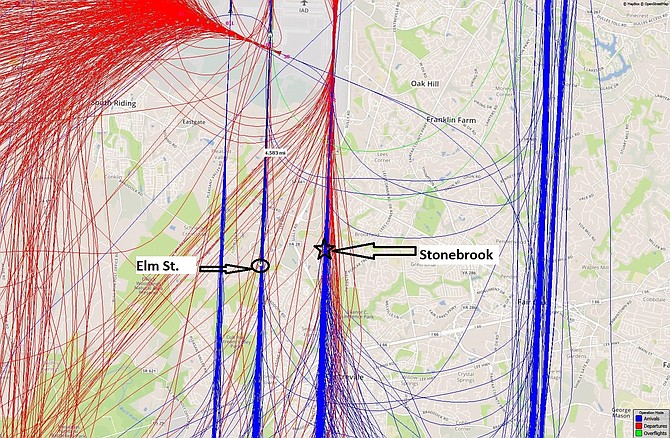 (Click on "Download .JPG" to see large map.) The FAA says homes should not be built in noise contours of 65 decibels and above. Courtesy of MWAA 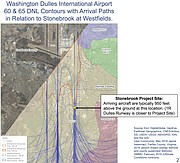 Like global warming, people may choose to ignore airport noise contours – but their effects will still happen, nonetheless. That’s what the Metropolitan Washington Airports Authority (MWAA) would like the Fairfax County Board of Supervisors to realize. But so far, the Board has turned a blind eye to information that could potentially cause some new homes not to be built – and it’s even refused to officially acknowledge that the information even exists.

Just recently – against the wishes of MWAA and two, local, land-use groups – it approved construction of Elm Street Communities, 157 homes directly under a Dulles International Airport flight path. Aircraft arrivals there are generally 30-60 seconds apart, and the flightpath is only 1,300 feet above this site.

The Board decided based on the airport’s noise-contour map from 1993, even though it’s known since last November that this map was updated in 2019 – and that airport use has intensified in the past 27 years. Furthermore, the Federal Aviation Administration (FAA) projects that, between now and 2045, aircraft operations at Dulles will grow by 27 percent – an increase of 240 flights/day.

The county’s own Comprehensive Plan states that “As new appropriate noise contours become available, this information will be brought before the Board of Supervisors so that appropriate modifications can be made, if necessary, to the Comprehensive Plan to reflect the most recent and most appropriate delineation of the Dulles Airport Noise Impact Area to which land-use compatibility policies will be applied.”

Yet the Supervisors have continued deciding land-use cases in the airport-noise area without including the updated noise-contour information in its Comprehensive Plan. And soon, they’ll consider another residential development, Stonebrook, that’ll be affected even more by the noise because jets there will fly just 950 feet above the homes.

“This is an exciting project on 12 acres in Land Unit J.”

REPRESENTING ITS DEVELOPER, Stanley Martin, on May 18, Andrew Painter addressed a joint, online meeting of the Sully District Council and West Fairfax County Citizens Assn. (WFCCA). He requested a rezoning to high-density residential for construction of 134 homes – 120, two-over-two, stacked townhouses, plus 14 rear-load townhouses – at the northeast corner of the Westfields Boulevard/Newbrook Drive intersection in Chantilly. Rooftop terraces are optional.

“This is an exciting project on 12 acres in Land Unit J,” said Painter. “The rears of the units won’t be visible from Westfields Boulevard or the lake, and there’ll be substantial vegetation and tree preservation.” Also planned is a publicly accessible trail along the pond, from east to west, around the entire community, plus 110,000 square feet of multi-use, open spaces.

“There’ll be tiered seating, a large green space, a smaller recreational space, two interior courtyards and a smaller, playground area,” said Painter. “About 60 percent of the site is open space. It was planned for office use, which would have generated some 2,177 vehicle trips/day; this use would generate about 972.”

The FAA says homes should be prohibited there because it’s designated that area as being inside the 65 DNL noise contour, having a day/night average decibel noise level of 65 decibels and above. But Painter said prospective residents would be told about the aircraft overflights and no home would exceed interior noise levels of 45 DNL.

“We’ll test five units for noise while they’re under construction,” he said. “And we’ll disclose the potential for exterior, aircraft noise to potential buyers.” He said a noise study by the developer identified the site as being below 60 DNL.

But Michael Cooper, MWAA’s manager of state and local government relations, showed slides placing Stonebrook inside the 65 DNL and said MWAA prohibits development there. However, since the county hasn’t yet adopted MWAA’s updated noise contours, it can approve the new homes as if it were still 1993 and not 2020.

“The use of interior noise-level reduction will not reduce outdoor noise problems,” said Cooper. “Dulles will grow, and neighbors will hear planes flying overhead in this parcel. It’s right under the arrivals path.”

“The noise hitting the playground will come directly from the aircraft, with no mitigation,” added WFCCA Land-Use Chairman John Litzenberger. “The kids will get the full force of the sound.”