New homes in Westfields are proposed for high-decibel areas. 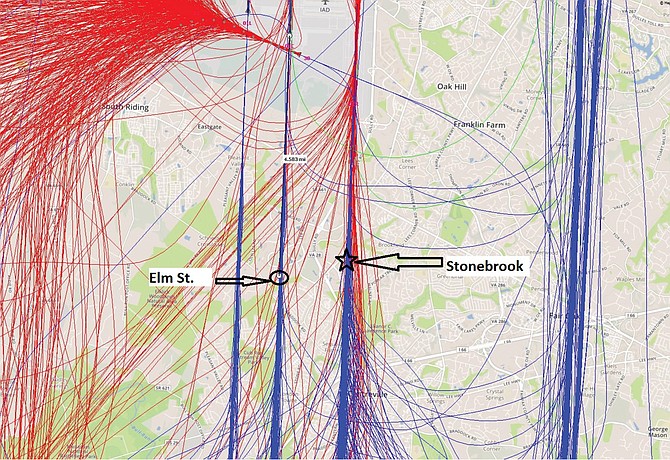 Both Elm Street and Stonebrook residents would be directly underneath flights arriving at Dulles. (Blue: arrivals; red: departures). Photo courtesy of MWAA 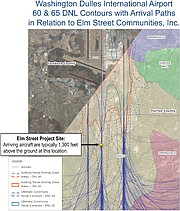 And troubled that the county Board of Supervisors would eventually be deciding this case based on a map of the airport’s noise contours from 1997 – when this map was updated in 2019 – the land-use committees invited representatives of the Metropolitan Washington Airports Authority (MWAA) to address their joint meeting, last Monday, Feb. 10.

That way, they could hear directly from the experts exactly what types of development should be prohibited in certain noise-decibel area, as well as the impact that airplane noise could have on anyone allowed to live there. Speaking first was Michael Cooper, MWAA’s manager of state and local government relations.

Showing a large map of the updated noise contours around Dulles Airport, he said, “Contours are lines on a map. Dulles currently has four runways [three going north to south, and one going east to west], with a fifth runway, going east to west, planned for the future.”

The area in white was designated 65 DNL, meaning it has a day/night average decibel noise level of 65 decibels and above. “The FAA terms it ‘highly annoyable,’” said Cooper. “So we don’t want to put residents there.”

The area in gray is designated 60 DNL – and it’s where the Elm Street development would go, if approved. “There’s a national discussion about whether the 65 should be dropped down to 60 or 55 because the FAA has received so many complaints from residents throughout the country about airport noise,” said Cooper.

The dark-green perimeter showed the one-mile-wide buffer between the contour areas and the residents, so people can see how close they are to the airport.

“Up until last year, Fairfax County protected [people] up to the 60, without a one-mile buffer,” said Cooper. “Last year, when Land Unit J [in Westfields] was being discussed, the county said it would allow development in the 60, provided there was disclosure, insulation and [other protective measures for residents]. But every single application in that area would come back to the Planning Commission and Supervisors before being approved.”

THE PROBLEM, he said, is that the Elm Street homes would be located “directly underneath the main, center runway of Dulles for [flight] arrivals. Their frequency is generally 30-60 seconds apart – and this flightpath is just 1,300 feet above [residents’] heads.”

In addition, according to a report done by the Federal Aviation Administration (FAA), aircraft operations at Dulles between 2020-2045 are projected to grow by 27 percent. And that number translates to an increase of 240 flights/day.

“We don’t object to many developments in Fairfax and Loudoun counties,” said Cooper. “The Airports Authority rarely comes forward and says, ‘Houston, you’ve got a problem.’ But in this case, there is a problem. So we’re saying to Fairfax County, ‘You really shouldn’t do it. But if you do, at least be transparent about it to the citizens.”

He then showed two maps – one depicting both the old and new noise contours, and the other illustrating where the runways are and Elm Street’s proximity to the center runway. He also displayed a map showing the paths of arriving and departing flights crisscrossing the area where several applicants are currently proposing residential projects.

As it stands now, said Cooper, “Prospective homeowners aren’t going to be shown the map showing all the flight paths going over their heads. The Airports Authority thinks Elm Street shouldn’t be built there. If it is, then its residents will complain to us and to the state and county about the noise. And there’s no such thing as a sound wall for overhead noise.”

Former At-Large Planning Commissioner Jim Hart said, “The Planning Commission told the Supervisors [by an overwhelming majority] to adopt the new contour map. But the Supervisors decided to go with the old, outdated, 1997 map until all the new applications are decided – and I find that absolutely appalling. If they’re showing a map from 23 years ago to let these developments be approved, then they’re shutting out the residents.”

However, Amber-Lee Leslie, Sully District Supervisor Kathy Smith’s land-use aide, said, “The county is studying the new contours and feels it’s their legal obligation to do it, case by case, and review cases under the contour policies existing at the time they applied. The county won’t adopt the new contours until they’ve been reviewed.”

Hart asked why the county is “rushing to approve all these new cases.” But Leslie said each application goes through a 9- 12-month process.”

Nonetheless, stressed Cooper, “The issue is not just the contours. The issue at the Elm Street site is that it’s got arrivals flying overhead at 1,300 feet. And the applicant hasn’t agreed to put all the flightpath lines on the map [for the potential homebuyers].”

He also noted that Fairfax County has been aware of the new, updated contours since November 2019. “That previous fall, a citizens group was reviewing Land Unit J, and we wanted it to have the information about the new contours before the [proposed], new developments in Westfields were approved,” explained Cooper. “And whether or not Fairfax County adopts them, they’re in the public realm.”

Mark Rutyna, with MWAA’s Planning and Engineering Office, said the county hired an independent noise expert who “reviewed MWAA’s study and agreed with it” and will report back to Fairfax County within two weeks.

Cooper said MWAA will work with the Supervisors; but he also told Hart he’s correct that the county should be using the most current, noise-contour map. “There are six land-use cases coming forward now in this area, including Elm Street,” said Cooper. “And a proposal [called Stonebrook] by [developer] Stanley Martin is in the 65 DNL.”

WFCCA Land-Use Chairman John Litzenberger – a former pilot, himself – also noted that the DNL decibel levels are averages and could actually be higher. “On takeoffs, when planes are at full power, that’s noisy, as well,” he said. “So the decibels on takeoffs will be significantly higher than on arrivals and could be as high as 70-80 decibels.”

Cooper said Stonebrook – being proposed for construction of 142 residential units, just east of Elm Street – will be even closer to the aircraft. “Planes will only be 950 feet above,” he said. “And we’ll suggest that the arrivals information be included in the marketing materials.”

FURTHERMORE, MWAA wasn’t even notified by the county about the Elm Street proposal until a week or two before it came before the land-use committees. So David Mould, MWAA vice president of Communications and Government Affairs, said, “We’ve now requested information [from Fairfax County’s Department of Planning and Development] when anything is proposed within the existing or updated contours.”

“We created a presentation for the Fairfax County Supervisors so they could see in 3-D what it looks and feels like when planes get to this level over Elm Street,” said Cooper. “But they didn’t want it presented in public because it contained information about a land-use case that would later come before them.” However, he added, “These new neighbors at least need to know where the planes fly. That’s all we ask is disclosure.”

The land-use committees then voted jointly, and unanimously, that Elm Street not be approved as it is now, and that both the updated contour map and the map showing Elm Street’s proximity to the runways, plus the flight paths of arriving planes, be included in the developer’s latest proffer (number eight) so prospective homebuyers would have this information. The committees also voted in favor of MWAA’s notification request in cases where homes, schools, childcare or eldercare uses are proposed in contours of 60 decibels and above.

On Feb. 12, the Planning Commission approved Elm Street’s application. Now, said Cooper, “MWAA will make the 3-D model available to county staff.” The application goes to the Supervisors on March 24.