‘We Didn’t Know it Would End that Fast’ in Centreville 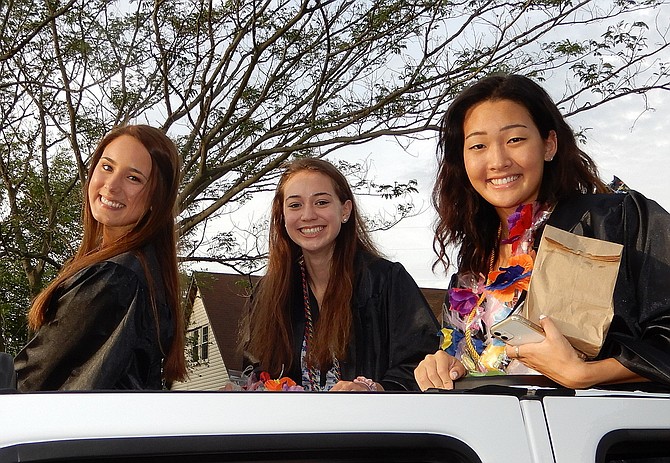 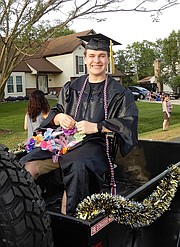 The 13 graduates gather for a group photo before the parade in Centreville.

Andres Lopez enjoys himself during the parade. 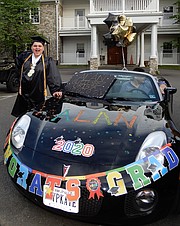 Alan Gutierrez-Urista poses beside his dad’s car before the parade begins.

Thanks to COVID-19, this year’s high-school seniors didn’t get to have their achievements and graduation recognized in a public way. So moms Liz MacDonald and Amy McConaghie of Centreville’s Gate Post Estates community organized a parade in their honor.

Thirteen grads – 11 from Westfield High and two from Paul VI High – live in that neighborhood. And last Friday evening, May 29, they donned their caps and gowns, got into decorated vehicles and were driven by their parents through the community while the residents clapped and cheered.

“Their senior year ended abruptly, and they missed out on so much – senior prom, sports and student-government banquets, barbecues and awards ceremonies,” explained MacDonald. “We’re just trying to make lemonade out of the lemons being thrown at them.”

“While FCPS will eventually hold a virtual graduation, that’s not the real deal,” she continued. “And talk of a possible, full graduation ceremony in the fall is a moot point, as these kids are slated to be off to college. So we took matters into our own hands. We’ve never had a parade in our neighborhood, so we put flyers on everybody’s mailboxes to let them know about it.”

SIGNS with each student’s photo were posted along the parade route, which the vehicles traveled three times. Also participating were Westfield Principal Anthony Copeland, the school’s bulldog mascot, a fire engine from Centreville’s Station 38 and a police cruiser from the Sully District Station.

MacDonald’s daughter, Lindsey, played field hockey and lacrosse at Westfield and said she’ll miss her teammates. She’s headed to the University of Tennessee to major in supply-chain management. “I was sad not getting to finish out the school year with my friends,” she said. “But I think it’s so nice that the moms planned this as an alternative since we didn’t get to have any graduation.”

Taylor Kim will attend JMU, majoring in education, but said it’s hard since she and all her friends are going their separate ways. Toughest, said Kim, was “not getting closure and not seeing my teachers anymore. I had my last day of school without even knowing it.”

Alan Gutierrez-Urista missed his theater family at Westfield. “We were going to have lots of fun with our production of ‘Into the Woods,’” he said. “But I’m looking forward to what the future has to offer. I’m going to continue with musical theater and become a Broadway star.”

Colby Davoren was saddest about missing senior prom. “It was going to be on my birthday, so it was a double whammy,” he said. Heading to Clemson to major in computer science, he was thrilled about the parade because “We get a second chance to have a real graduation, as opposed to virtual.”

Ellie Reimer said she’ll miss going to school with people she knows and “the comfort of seeing friends in the morning. She’ll attend N.C. State, majoring in engineering. But she wishes she could have said goodbye to her high-school teachers. “We didn’t know it would end that fast,” she said.

Heading to JMU, majoring in health science to become a physician’s assistant, Kailee Corbett said, “We missed graduation. But I’m really happy we’re doing this parade to make up for it.”

AVA BURKAT felt bad about missing prom and “not being able to see everybody all together for the last time.” This was Paul VI’s final year in Fairfax before moving to Loudoun County, in the fall, so Burkat regrets “not spending those last few months at the old building.”

She’ll attend The Catholic University of America to pursue a degree in early childhood education. Regarding the parade, she said, “It’s great; it feels special. Even though the last few months were kind of unpredictable, this was something I could count on.”