Centreville: ‘As a Family, We Take a Stand for Justice’
Votes

Centreville: ‘As a Family, We Take a Stand for Justice’ 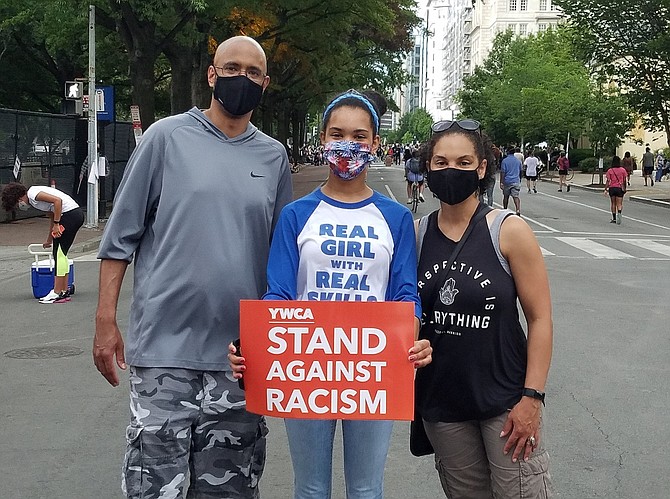 Jamie and Erik Gadley and their daughter, Kayla, a rising sophomore at Westfield High, live in Centreville’s Sully Station II community. And as a black family, the recent, unprovoked deaths of black people such as Breonna Taylor and George Floyd have both angered and saddened them.

In response, they joined the peaceful protest, last Friday, June 5, in the newly renamed Black Lives Matter Plaza in Washington, D.C. But in addition, they’ve had serious discussions as a family about their own thoughts and feelings regarding what’s going on and why it’s so important.

“It has been a powerful and enlightening conversation for our family to have,” said Jamie Gadley. “It has helped us to understand each other’s experiences and perspectives. In spite of the differences, we agree that we believe in justice and humanity. All lives will not matter until Black Lives Matter, so we will continue to take a stand.”

She said they’re aware of how people may perceive, treat and respond to them based on the color of their skin. “We recognize that systemic racism impacts the lives of blacks daily, in overt and covert ways,” said Gadley. Things that the average white person doesn’t have to worry about are real and significant concerns for a black man.

For example, said Gadley, “When the COVID-19 global health pandemic reached the United States, causing us to adjust our way of being, my husband and I had a conversation about his going to the grocery store with a bandana covering his face. The reality that we paused and discussed how to cover his face and to extend a kind gesture – to diminish the perception of him as a threat – is a manifestation of racism. It is important for us all to have these discussions in order for mindsets and perceptions of black men to change.”

She then noted three recent incidents of clear and blatant racism that were captured on film and have since created a platform for discussing racism and discrimination in America. And it’s critically important, she said, that blacks have a voice in this discussion and are truly heard.

THINK ABOUT IT, said Gadley: “Do blacks not have the right to grocery shop, jog through their neighborhoods and walk through the park without being deemed as a threat, being targeted or killed – simply because they are black in America?”

Over the past three weeks, she and her family – like others in the U.S. and around the world – have not only learned of the deaths of Amaud Aubery and George Floyd, but have witnessed these tragedies on film. Furthermore, said Gadley, “We saw the weaponizing of whiteness against Christian Cooper. These incidents bring to light the issue of systemic racism impacting blacks in America. Racism is injustice and, as a family, we take a stand for justice.”

She called Aubery’s killing “deeply concerning” and another motivation behind her family’s willingness to take a stand in the Black Lives Matter movement. She said a system in which individuals would feel entitled to profile, chase down and murder a black man jogging in his community – a simple activity that white men do, every day – is another illustration of prejudiced minds that devalue the worth and lives of black men.

But that’s not all, said Gadley. “We also take a stand for Christian Cooper – a Harvard-educated, black man who asked a white woman to put her dog on its leash,” she explained. “Her response of threatening to call the police and fabricating a story about a black man trying to hurt her was evidence of her understanding of how white America views black men. Rather than being a courteous, community member and law-abiding citizen, Amy Cooper [no relation to him] weaponized her white privilege to criminalize Christian Cooper’s being black.”

GADLEY said these incidents reflect how racism has manifested on camera and has now allowed space and the opportunity for people to see and examine the “systemic racism and microaggressions” that blacks experience and observe daily. Yet she and her husband have taken a thoughtful approach when talking with Kayla about it.

“We have taught our daughter to speak and act in, and with, love – which includes speaking up when an injustice occurs,” said Gadley. “And we believe it is important for us to unite for justice during this defining movement in history. We are peacefully protesting systemic racism and will lovingly call friends, neighbors and community members into courageous conversations about racism so that we can collectively work for ‘liberty and justice for all.’”