‘Because My Skin Is Black, Is My Life Worth Less?’
Votes

‘Because My Skin Is Black, Is My Life Worth Less?’ 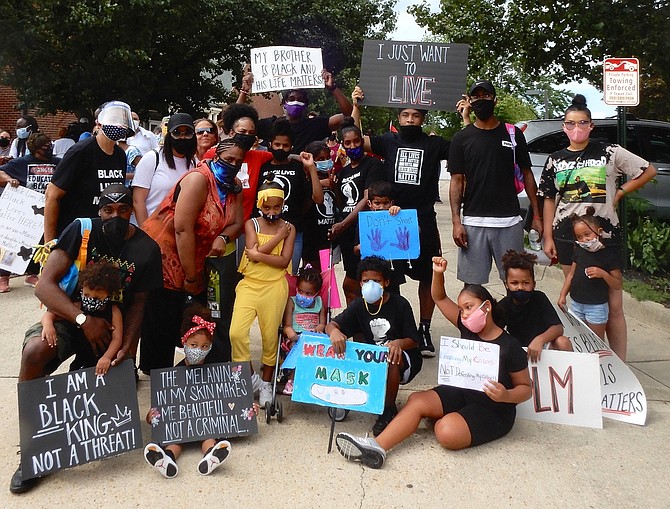 With signs and facemasks, this group prepares to march from Mount Calvary Baptist Church to Fairfax City Hall. Photo by Bonnie Hobbs.

Ready to march are (from left) Vernon and Sharon Miller, and Denise Snowden, with Miller siblings Jayceon, 7, and Jayanna, 3. 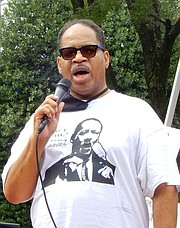 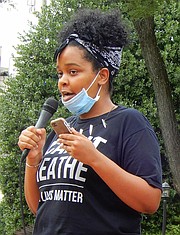 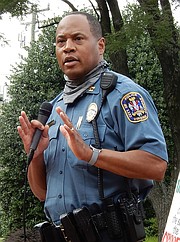 Their voices were strong, and their message was clear: Black Lives Matter. And some 200 people gathered Sunday afternoon, June 28, in Veterans Amphitheater outside Fairfax City Hall to emphasize that the time for action is now.

“Painting ‘Black Lives Matter’ on streets and taking down statues only takes the bandage off the wound – it doesn’t make it go away,” said Fairfax High and GMU grad Dori Prescott. “The standard of Black lives has to be more than just ‘matter.’ Challenge the white supremacy you were taught. Unlearn this systemic racism and oppression of Blacks.”

“We’re in the midst of a Civil Rights movement; and until the wound heals, and after, it will continue,” she said. “It deserves space in everyone’s lives. What will your grandchildren say about you? Use your time, gifts and money and catalyze healing.”

Putting on the March and Rally for Peace, Justice and Prayer was the City’s Mount Calvary Baptist Church and the nonprofit House of Wood Neighborhood Outreach run by church member Vicki Wood. Participants gathered at the church and – carrying signs and chanting, “No Justice, No Peace” and “Black Lives Matter” – they marched to City Hall.

Church member Katie Richardson was there “trying to do my part. My extended family really don’t get it, and I just feel I can do more.” For member Sharon Miller, it was personal.

“I have Black family members, and their lives matter, and I want to make a difference,” said Miller. “We need to communicate and work with the community for the common good. No lives should be lost if we put humanity first.”

Bishop Paul Taylor, of Living Water Worship Center Church, called this moment the continuation of the Rev. Martin Luther King Jr.’s dream and “the march for justice and equality for all. As a father of four, Black males, this is my contribution for all Black men of vision and purpose.”

CITY RESIDENT Brij Singh explained, “It’s a reasonable thing to ask for – for people to be fair to each other. On the Supreme Court building are etched the words, ‘Justice for all,’ but we’re not following that.”

Taylor’s brother, Booker Taylor Jr., said Mount Calvary is his family’s church. “Black folks have been treated badly throughout the years,” he said. “Hopefully, this [movement] will raise awareness of what they’ve been through, but no one’s really believed until now that there are videotapes.”

Emcee Denise Taylor told the crowd, “Prayer changes things, and we’re here today to present our request to God with prayer. We’re all human beings, and children imitate what they see. So we’ve got to hold each other accountable for what we’re not doing.” Then Bishop Taylor prayed that this movement “will protect all of different cultures and backgrounds.”

“I call upon you to break barriers and not Blacks,” added Deacon Michael Crabbe of Howard Ministry Church. “Why does power still seem to rest with a knee upon our necks? To admit that God made us equal is to dismantle America’s history of separate but equal. You can be separate or equal, but not both.”

“Can I be Black and still your brother?” he asked. “Let there be no more basis for baseless attacks. Slavery hasn’t ended but evolved, and there can be no solution until love is involved.”

Then Mount Calvary’s pastor, the Rev. Jeffery Johnson, electrified the crowd by reenacting from memory King’s historic, 1963, “I Have a Dream” speech – which, said Johnson, “should be irrelevant by now.” King said the Constitution and Declaration of Independence promised all men the rights to life, liberty and the pursuit of happiness – but America defaulted on that promise to people of color.

“Now is the time to lift our nation from the quicksands of racial injustice to the solid rock of brotherhood,” said King, “Now is the time to make justice a reality for all God's children.” He warned that Black discontent wouldn’t pass until there was freedom and equality for all and that there’d be a “rude awakening” if the nation returns to business as usual.

“The whirlwinds of revolt will continue to shake the foundations of our nation until the bright day of justice emerges. I have a dream that my four, little children will one day live in a nation where they will not be judged by the color of their skin, but by the content of their character.”

Next, Fairfax High senior Kate Coffin decried the way “White people don’t recognize their privilege.” She also presented a long list of many famous inventions created by Blacks but taken credit for by Whites.

“None of you are guaranteed your next birthday, especially if your skin is Black,” said Fairfax City’s Penny Tangamu. “Breonna Taylor was killed in her bed – shot eight times while asleep. June 5 would have been her birthday, and her killers have still not been charged. Because my skin is Black, is my life worth less? This fight is about letting us live.”

FAIRFAX CITY Police Maj. Daniel Grimm, who’s White, said his department is committed to this movement. “When I look out here, I see diversity,” he said. “We need to love and support each other more, learn about and invest in one another. The Police Department is trying to improve, every day. I told my children that what they saw happen [to George Floyd] shouldn’t have – it was a police officer abusing his power.”

City Police Capt. Ronnie Lewis, who’s Black, said he was raised in Southern Virginia “where people called you names – and it made my dad feel less than a man. I joined public safety, over 25 years ago, to try to make a difference. The best way to change something is to transform it from the inside. I was the first Black supervisor in Fairfax City, but we need more people of color to participate.”

“Take action to change the system,” said McClure. “We need to continue raising our voices, making sure we’re heard and standing strong, for as long as it takes. When these laws of oppression come down, only then will we truly be free.”

The Rev. Rob Cheeks, of Shiloh Baptist Church, said there’s a problem when privileges aren’t used to help the underprivileged. “We can’t breathe because of public policies precluding our possibilities. Our skin color has been criminalized. Make some waves until there’s fairness and an end to racism – and justice rolls down like water. Although it may seem like a season of despair, never give up.”