Freedom of Speech or Zoning Violation in Alexandria?
Votes

Freedom of Speech or Zoning Violation in Alexandria? 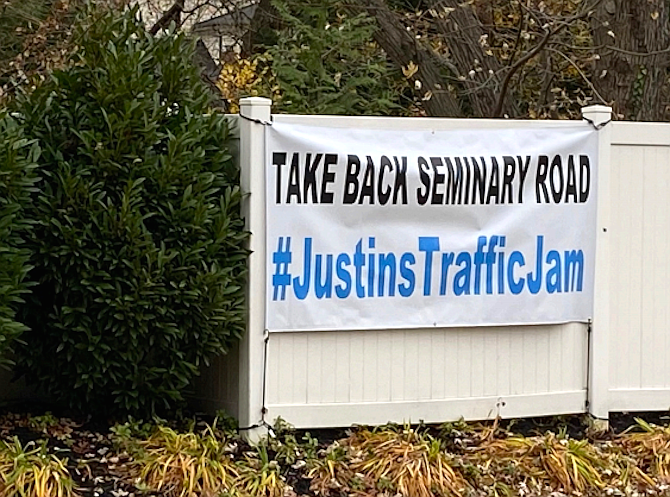 The sign at 1420 Key Drive is 32 square feet, which exceeds the city’s maximum of 22 square feet for signs on residential properties. Homeowner Brett Melvin appealed the violation for his sign because he thinks the decision was politically motivated. Photo contributed

The Alexandria Board of Zoning Appeals has rejected a request from an Alexandria homeowner to display a 4-foot-by-8-foot sign declaring his opposition to the controversial Seminary Road diet. The homeowner, Brett Melvin, said that the display was not actually a sign at all, arguing that the zoning ordinance should not apply because he said the exhibit should be considered art. He lost that argument in a vote of 5-to-1.

“I have begun gathering information on the logical next steps,” said Melvin, adding that he isn’t ruling out a lawsuit against the city. “I first must make certain that I have exhausted all the avenues available with the city appeals process. I will weigh all my options to decide on the best path forward.”

The debate over the sign reignites a simmering controversy over the Seminary Road diet, which City Council members narrowly approved in a four-to-three vote last September. The vote reduced two traffic lanes and installed a new turn lane, adding bike lanes along a stretch of road that connects the Virginia Theological Seminary to INOVA Alexandria Hospital. The next month, Melvin posted a sign that read “Take Back Seminary Road #JustinsTrafficJam,” employing a hashtag used on social media by people discussing the controversy. During the holiday season, the sign was festooned with festive lights.

“My daughter sings the hashtag every time we drive past,” joked Mayor Justin Wilson on Facebook after the vote. “I like the sign. I always wanted my name up in lights.”

Five days after he installed the sign in November, Melvin received a notice of violation from the city. That was prompted by an anonymous complaint to the city’s Call, Click Connect system, which was logged on Nov. 29 at 8:51 am. The anonymous person who lodged the complaint specifically cited Article 9, Section 104 of the city’s Zoning Ordinance, which regulates signs, marquees and awnings.

“Would you investigate and handle expeditiously?” asked the anonymous tipster.

City officials say enforcement of zoning is driven by complaints through systems like Call, Click, Connect, which has since been replaced by a new system called Alex311. After receiving the complaint, zoning officials investigated the situation on Key Drive. They determined that the sign was larger than the 22 square feet maximum, concluding that it was in violation of the zoning ordinance.

“We have two zoning inspectors,” said Tony LaColla, chief of the Land-Use Services Division. “We do not have the number of staff to proactively go out and site violations, so we rely on a complaint-based system.”

Melvin argued that many other signs in Alexandria are larger than 22 square feet, and he worries political motivations may have been behind the complaint and the city’s response to it. He tried to argue that his First Amendment rights were being violated by selective enforcement. But city officials responded that they took action based on the size of the sign, which was in violation of the ordinance, rather than language on the sign.

The city’s zoning ordinance defines a sign as something that is “used to attract attention to an institution, organization, business, product, service, event or location.” Melvin argued that his sign did not do any of those things and, therefore, should not be considered a sign, although he called it a “sign” in papers he filed with the city. Ultimately, board members had to figure out how to make a content-neutral determination about the sign while also determining whether it drew attention to an institution, business, product, service, event or location.

“I think in this case, the ordinance is flawed, ultimately that results in the inability for it to be enforced appropriately,” said Michael Yoo, the lone vote in favor of Melvin’s appeal. “You could put up a sign of any size and I think that is fraught with real problems.”

The future of the sign, which has now been up for seven months, is now in doubt.

“It stayed up this long only because of the coronavirus pandemic or the Wuhan flu, whatever you want to call it,” Melvin told members of the Board of Zoning Appeals.