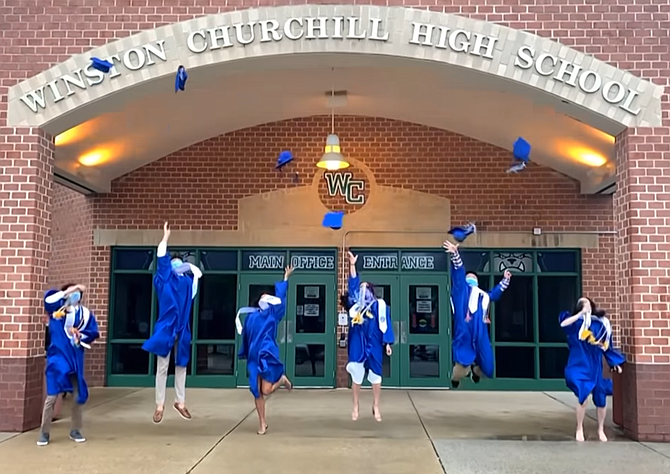 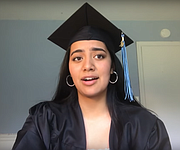 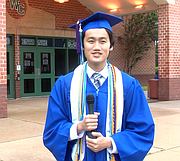 River Falls had a parade for their graduating seniors from Whitman and other schools that included vehicles from Cabin John Park Volunteer Fire Department.

Though similar in some ways, each graduation ceremony took on the personality particular to its school’s culture.

Speaking in front of the school, Andrew Jin gave the student address, expressing that he could not give wise words or share life lessons to his fellow graduates.

“After all it is becoming more and more apparent that no one really understands what to do,” he said.

Instead he highlighted the achievements of “our class’ unique spirit and accomplishments these past four years.”

Churchill Principal Brandice Heckert told the seniors that their spirit still fills the halls of the school, even though they haven’t been there in person since March.

“You have undeniable strength,” Heckert said. “Among this class are activists, humanitarians, artists, caregivers, athletes, scientists, journalists and musicians. You are kind, compassionate, sympathetic, hardworking and resilient.

“I know the future is still unclear but be proud of what you have accomplished and continue to strive to achieve your goals,” Heckert told the 560 graduates.

She challenged the class to continue with love, peace and justice.

As each graduate’s name was announced, their picture was shown on the screen along with a message from one of the Churchill staff members who had worked with them, adding a very personal note to the ceremony.

As the ceremony ended, all the class officers were in front of the school, spaced according to social distancing recommendations, where they joined together for the tassel turning ceremony then threw their caps in the air and jumped in celebration.

Expecting to see socially distanced participants, the Walt Whitman High School graduation started with a view of a full class of graduates on the stage at D.A.R. Constitution Hall in Washington D.C., courtesy of photo editing.

Confusing, but perhaps a bow to what might have been!

The Whitman virtual ceremony also had music throughout: “A Solitary Wish” by Brian Balmages was performed by the school’s orchestra, later “Benediction” by Owen Goldsmith, was sung by students from the choral groups and finally the senior class ended the ceremony singing the school song.

Dr. Robert Dodd, Whitman principal, addressed the class acknowledging the “profound sense of loss” many of the students must feel by having their school year end at home rather than celebrating with each other.

“In times of loss we must look to find the things and events that give us hope for the future,” he said. “Today’s commencement is one such event. Today we are going to recognize you for all you’ve accomplished over the years knowing full well that what you’ve been through recently will set you apart and uniquely prepare you for the changing future.”

After recounting the successes of the graduating class, Dodd introduced Board of Education member Patricia O’Neill who officially awarded the class its diplomas.

Instead of walking across the stage, class members names were read, and photos shown, accompanied by canned applause to accomplish the Whitman graduates’ leave taking.

In the words of Walt Whitman: “Now, Voyager, sail then forth, to seek and find.”