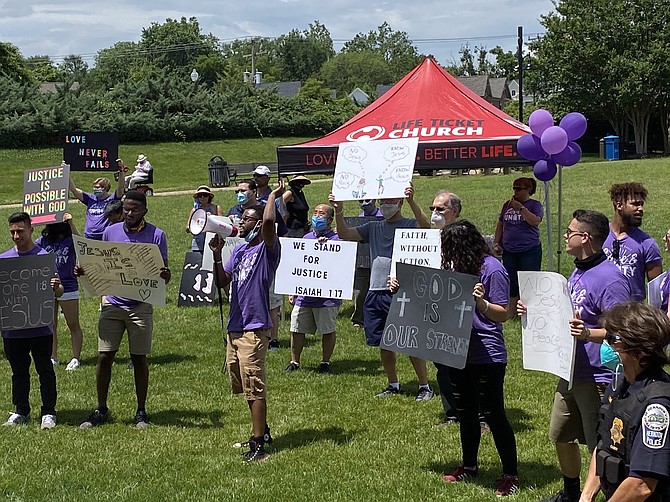 Marchers bear the heat of the summer sun, ready to release prayers while standing together with the Town's police and the community. Photo by Mercia Hobson. 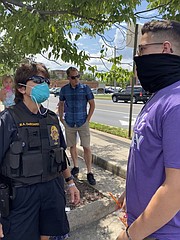 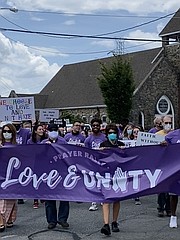 Participants in The Love & Unity Prayer Rally organized by Herndon-based Life Ticket Church march through the Town of Herndon as (center) Reverend Stephen Smith-Cobbs Trinity Presbyterian Church, (to his left) Town of Herndon Mayor Lisa C. Merkel, and (to his right) Town of Herndon Police Chief Maggie DeBoard join in solidarity carrying the church's banner to the Town Green. 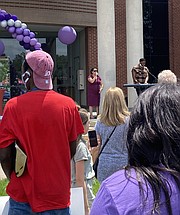 In the Town of Herndon, population 23,000, faith-based organizations gathered with the Town's police force. “Brothers and sisters," Lead Pastor Leah Coleman Baker called them. Baker is African American. "We need them, and we support them when they protect and serve us," she said in a prayer rally held Sunday, June 28 that attracted a reported 111 participants according to a police spokesperson.

Life Ticket Church hosted the Love & Unity Prayer Rally in the Town. Its purpose was for the congregation to join with other area faith leaders and the Town of Herndon Police Department in a demonstration of love, and to pray for unity for police departments and communities. Lead Pastors Dorian and Leah Coleman Baker met with invited marchers, including area faith leaders and their congregations as well as the Town's mayor, Lisa C. Merkel, manager Bill Ashton and Chief of Police Maggie DeBoard along with some of the department's officers at the Pines Shopping Center parking lot shortly before noon.

Marcher Branden Barragen conversed with Chief DeBoard. Afterward, he said, "It is important to connect... not from a place of fear of authority but connect out of love." Chief DeBoard said that she was at the rally to support the community and help make it better. "We exist to keep the peace and safety... It's our sole reason why we exist," she said.

Derrick Jones of Herndon also attended the rally. Jones said that it was vital for him to be there because they were united and wanted to see God's love flow through the Town.

Following a brief service on the Town Green, Leah Baker spoke to the racially mixed and multigenerational crowd. She said, "We are here today, joining with people from all walks of life coming together in love, and we are praying for police and our community. Racial injustice, police brutality and violence are only symptoms... While we applaud protesters raising their voices against injustice in a peaceful way, we know that protests alone will not heal the land...We simply cannot ignore the cries of our community or the prescribed cure. We stand in passionate support of our Herndon community and all other communities around the world that are outraged. We see that too many communities around this country feel that their voices are not being heard, and their complaints about racist treatment are unheeded...There are a lot of African Americans in our community today that are wounded and hurting from what has taken place in our country...We all must continue fighting for racial justice long after protest stories are no longer front-page news...We stand here together with our police and the community to release prayers of healing, forgiveness, peace, strength, (and) justice."