Both teams qualify for State Tournament. 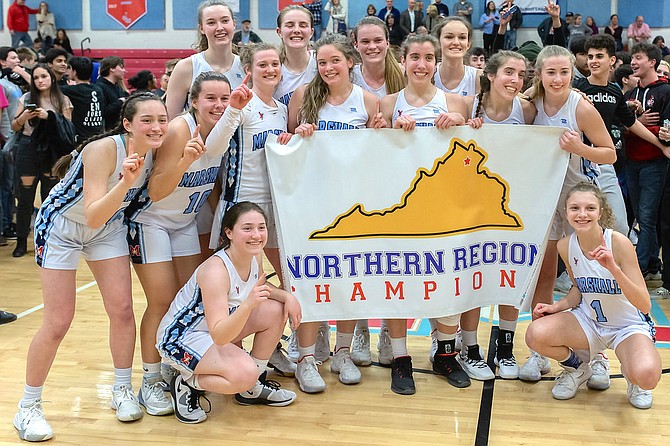 The Marshall Statesmen are the 6D Northern Region Basketball Tournament Champions after defeating Madison 37-35. Photo by Will Palenscar/The Connection 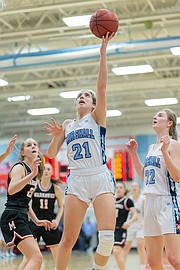 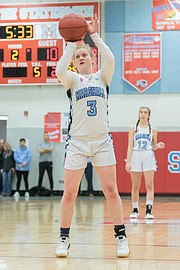 Zoe Soule #3 led Marshall and all scorers with 17 points. 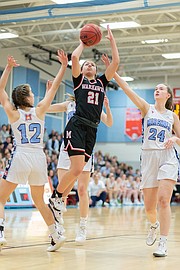 The Madison Warhawks girls took their undefeated record on to take on the Marshall Statesmen on Feb. 28. The Warhawks defeated the Statesmen on Dec. 18, 64-43.

The 1st quarter started much of the way the first game went, with Madison taking an early 10-0 advantage before Marshall would score on a 3 pointer by Caroline Catterton in the closing seconds of the quarter. The quarter ended with Madison up 10-3.

In the 2nd quarter Marshall would slice the lead down to 3 points by quarter’s end 18-15, Marshall was led by Zoe Soule who totalled 5 points in the quarter.

The 3rd quarter saw Madison's Tedi Makrigiorgos score 8 of her team’s 11 points including two 3 point baskets points, increasing Madison's lead to 29-25 with a quarter to play.

In the 4th quarter Marshall would score 12 points including 5 points from the charity stripe. Soule's two free throws would give the Statesmen the lead for good 37-35 and a desperation shot by Amalia Makrigiorgos was off and the Statesmen were Regional 6D Champions. Soule would finish the game with a game high 17 points.