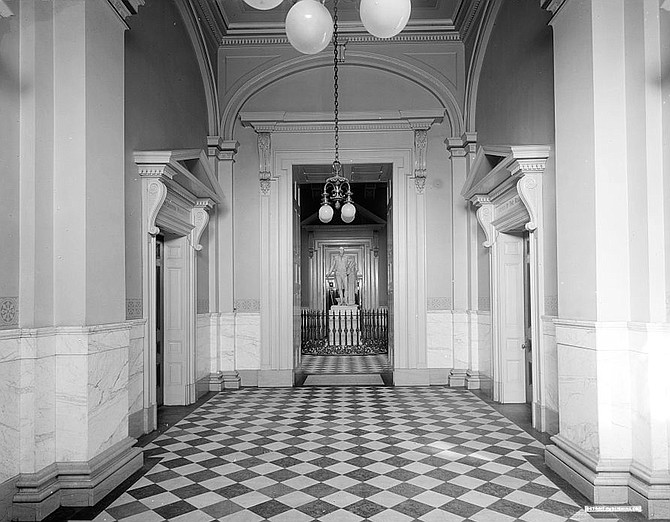 A statue of George Washington stands at the center of the hallway between the House of Delegates and the Virginia Senate, two chambers that have been at odds with each other this year. Library of Congress

Democrats and Republicans in the General Assembly like to see themselves as adversaries. The real enemy, they like to say, is down the hall.

The House of Delegates and the Virginia Senate are famously at odds with each other under the best of circumstances. This year, though, tensions between opposite sides of the Capitol have boiled over into a new kind of rivalry. And it’s not just that they face each other in an annual basketball game or even that they make a point of pronouncing “sine die” differently. This year, as Democrats seized control of both chambers, tensions between the House and Senate reached epic proportions that could end up having consequences for everything from the minimum wage and gun control to redistricting and who is allowed to officiate weddings.

“We’ve got to go back to the people and say here’s what I promised, and here’s what I did,” explained Del. Ken Plum (D-36). "By contract the Senate, candidly, can relax a few years before they go back to voters. And I think that means they are a little less responsive on issues that we might say are very popular.”

One of the most important distinctions between the two chambers is that the House of Delegates traces its history back to 1619. The Senate, by contrast, is an afterthought in Virginia government. It was created in 1776 as a kind of modern update to the Council of State, where lifetime members offered advice to the governor and served as the highest judicial body in the colony. These days, the House has two-year terms, and the Senate has four-year terms.

“When you’re in the Senate, you have more measured opportunity because you have a four-year term,” says Senate Minority Leader Tommy Norment. "And you could give an aggressive vote in year one, but you would have three years to rehabilitate yourself. I think the Senate, as it’s currently constituted even with the Democratic majority, is a little more deliberate.”

THAT DELIBERATION has been a source of tension this year, starting in a dramatic fashion during the first day of session in January. House Democrats in leadership prepared what they thought would be a routine function of appointing a committee of House and Senate members to inform the governor of their organization. Normally, the committee has four members of the House and three members of the Senate. But when the House sent that document over to the Senate it came back with an amendment changing the composition of the committee to three House members and three Senate members.

“What they really wanted was equality on the conference committee for the budget,” says Del. Alfonso Lopez (D-49), the House majority whip. “And they were trying to establish a precedent for having all the reasons in the world to insist on having six and six or five and five or seven and seven so that they have an equal say on the final budget.”

When the House Democratic leadership first saw the Senate amendment, some thought it was a joke. Perhaps the new Senate Democratic leadership were playing some kind of practical joke on the first day of session, which is dominated by pomp and circumstance. The committee in question was just a ceremonial gathering to walk upstairs and inform the governor that the chambers are organized and ready for business.

“So we walk down the hall and ask what’s going on, and the Senate lays into us about this has been a long time coming and just because it’s always been this way it doesn’t need to be this way,” recalls Del. Marcus Simon (D-53), the House majority parliamentarian. “We just came off the campaign trail, and we just worked like heck for each other because we’re all on the ballot at the same time. We’re doing joint town halls and joint campaign events. We’re friends, and all of a sudden they’re screaming at us.”

Simon recalls that tense meeting ended in an ultimatum.

“You just tell the governor that he won’t be able to do the State of the Commonwealth this year,” senators told House leaders, according to Simon.

The new House leadership huddled with Speaker Eileen Filler-Corn to figure out how to respond to demands from the new Senate Democratic leadership. They eventually came up with a plan to hoodwink the upper chamber: appoint a House committee of seven members to separately inform the governor that the House was organized. The idea was that the Senate would assume it was a six-member committee, and they would follow suit with sending six members to inform the governor that the Senate was organized. The plan worked, and lawmakers avoided what could have been a disaster on their first day in office.

“This was like real serious anger that I was seeing,” recalls Simon. “And that was a big surprise to have that kind of enmity with the other body.”

TENSIONS BETWEEN the House and Senate have become a defining theme of the General Assembly session this year, especially after bills crossed over from one chamber to the other. Senators have been modifying the more progressive elements of the House agenda. Perhaps the most striking example of this is the effort to increase the minimum wage. House members approved increasing it to $15 an hour across Virginia by 2025. Senators took a regional approach that wouldn’t increase the minimum wage in Hampton Roads until 2034.

Del. Mark Levine (D-45) got several bills through the House that floundered in the more conservative Senate. Perhaps the most significant was the assault-weapons ban, which passed the House but was killed in a Senate subcommittee. Gov. Ralph Northam asked Levine to carry the bill for him, and he considers it one of the biggest missed opportunities of the session. Levine also had a bill that would have removed many of the onerous requirements for who gets to officiate weddings in Virginia, eliminating requirements he viewed as unconstitutional comingling of church and state. Then end result is that almost anyone would have been allowed to officiate weddings, an idea that passed the House unanimously but died in the Senate.

“I come, perhaps, from a more traditional era that it should be someone in the community that has some gravity,” explained Sen. Chap Petersen (D-34). "Maybe it’s a state delegate. Maybe it’s a judge. Maybe it’s a pastor. But it’s not anybody off the street.”

Senators like to think of themselves as having a bit more decorum than the House, where members have a tendency to be a bit raucous. This became an issue when lawmakers were considering a bill introduced by Del. Dawn Adams (D-68) that would have legalized spitting in public. The idea was that police might use the prohibition to target people for harassment, so eliminating the prohibition was viewed by many as a criminal justice reform — until it got to the Senate, where freshman Sen. Joe Morrissey (D-16) gave a speech outlining the perils of spitting. The bill legalizing spitting had actually already passed the House and Senate, but Morrissey brought it back for reconsideration and delivered a stemwinder of a speech against it.

“You don’t like something, just spit on the floor,” Morrissey said in an impassioned speech on the Senate floor. "Spit on Thomas Jefferson’s marble walkway. Spit in the balcony. Spit over the balcony. Spit in any municipal building. Pay your taxes, and if you don’t like it spit in that municipal building. Walk out of the courthouse and spit on the floor, not on the sidewalk outside, which is illegal, but inside the building.”

Other senators joined in, and the Senate actually debated the merits of spitting in public for 15 minutes before killing the bill.